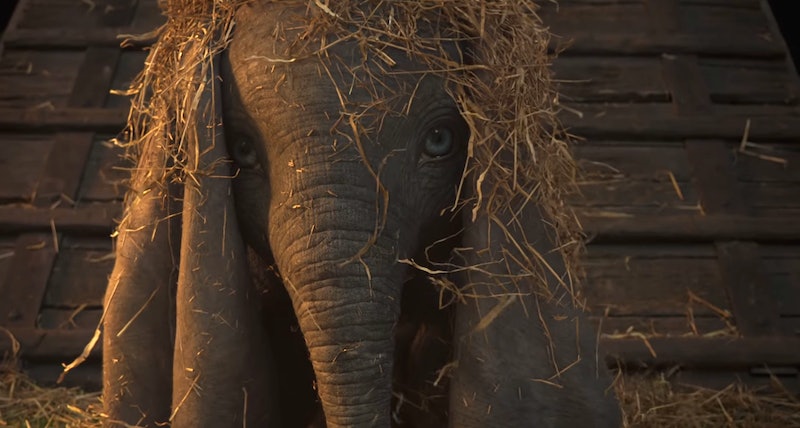 Get ready for Dumbo the flying elephant to leave you in a puddle of tears all over again. Disney surprisingly released the teaser trailer for the live-action Dumbo on Wednesday. Along with the first glimpse of the big-eared Dumbo, the trailer also shows the human characters portrayed by Colin Farrell, Michael Keaton, Danny DeVito, and Eva Green. And while these additions prove that there are some significant differences between the animated version and the live-action remake, fans can rest assured that the film is in good hands, with Tim Burton directing the dark tale. The filmmaker has adapted grim childhood classics before, like Alice In Wonderland. And, based on the new Dumbo trailer, Burton's live-action take on the movie seems like it's going to be just as emotional as the original.

As Disney previously announced, Farrell stars in the Dumbo remake as Holt Farrier, a war veteran and former circus star. DeVito's circus owner Max Medici charges Holt with taking care of and training Dumbo — and like in the original, the little elephant struggles in his circus role. However, that changes when Holt's two children (portrayed by newcomers Finley Hobbins and Nico Parker per Variety) discover Dumbo's ability to fly. This ability draws the attention of Keaton's entrepreneur V.A. Vandemere and Green's trapeze artist Colette Marchant. Although he's not in the first trailer, Variety also reported that Alan Arkin will appear as the fictional Wall Street tycoon J. Griffin Remington.

In the original Dumbo, the circus animals were the main characters and all spoke. And while it's great that Burton is reuniting with actors Keaton, DeVito, Green, and Arkin — whom he has worked with before on films like Beetlejuice, Edward Scissorhands, Batman, Big Fish, and Dark Shadows — it may be disappointing to fans of the Disney classic that the animals don't get to be the stars this time around. Based on the trailer, it also seems like Dumbo's only friend, Timothy Q. Mouse, won't show up in the remake — at least not in a major role. But one element that people might be happy to see is missing is the scene with the crows. Since the film came out in 1941, the crows in Dumbo have been regarded as reinforcing racial stereotypes of the African American community.

Despite these major departures from the original movie, there are a number of moments that will be familiar. Early in the trailer, the storks are delivering Dumbo to his mother, Mrs. Jumbo. And one clip shows Dumbo's mother heartbreakingly being carted away from her son. Even the truly bizarre pink elephants of "Pink Elephants On Parade" make an appearance. Though it's doubtful that Dumbo will see the pink elephants in a drunken vision like he did in the original.

Burton said at Disney's D23 Expo in 2017 that he's trying to convey the same emotions as the animated movie with his remake. "Dumbo was always one of my favorite Disney films," Burton said. "We're trying to give it the same heart, feeling, and emotion that we all loved about the original." And the trailer certainly achieves that by using the song "Baby Mine." In the original movie, Mrs. Jumbo sings the song to Dumbo after she has been imprisoned for defending her son. It's a heartbreaking moment, alluded to in the trailer with the new cover. As Deadline reported, Norwegian singer Aurora is responsible for the tear-inducing cover of "Baby Mine" that's featured in the remake.

The same day as the trailer dropped, Disney also unveiled the first poster for Dumbo. It shows a shadow of the beloved elephant looking up at a floating feather — and that hopeful image is really the heart of the story. Burton definitely seems to have kept that hopeful spirit intact, so the remake of Dumbo is certain to take people on an emotional flight when it is released in 2019.