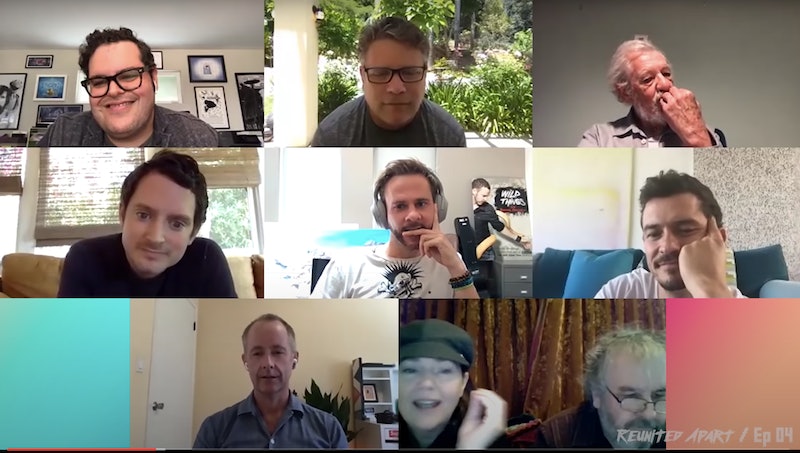 Proving the enduring relevance of the fantasy films, the Lord of the Rings cast reunited on Zoom, and reenacted some iconic scenes from the trilogy. On Sunday, Josh Gad hosted a virtual event titled "One Zoom To Rule Them All," inviting director Peter Jackson to attend, as well as familiar cast members such as Elijah Wood, Sean Astin, Ian McKellen, Viggo Mortensen, Orlando Bloom, and more. The LOTR family reunited for a good cause, too: viewers were asked to donate to No Kid Hungry if they enjoyed the show.

On Thursday, Gad posted a trailer for the LOTR reunion on YouTube, convincing Astin to invite the rest of the cast. "You fought off an army of orcs, escaped the clutches of the Uruk-hai, killed the demon spider Shelob in order to destroy the most powerful ring in the world," Gad joked. "How hard can a call to Elijah Wood be?" In the trailer, Gad asked what the crew thought of a full-on reunion, and Elijah Wood quoted Frodo Baggins, saying, "I wish this choice had never come to me. I wish none of this had happened."

Gandalf popped on the broadcast to offer some encouraging words, stating: "So do all who live to see such times, all we have to do is decide what to do with the time that is given to us."

During the broadcast, Gad moderated a discussion with the stars, asking them behind-the-scenes questions about The Lord of the Rings. It's been almost 20 years since The Fellowship of the Ring premiered in 2001, and The Two Towers and The Return of the King premiered in 2002 and 2003, respectively. In addition to the actors talking about the process of getting cast in the films, the crew also reenacted several key scenes, and their message is still relevant to the current day and age.

Astin, who played Samwise Gamgee, reenacted one particularly uplifting scene before the cast prepared to sign off. "Elijah there's just a couple of words before yours that seem relevant in the COVID world, and this is a fundraiser so let me set you up with it," he began. Then he quoted from the film, reading, "In the end, it's only a passing thing this shadow. Even darkness must pass, and a new day must come, and when the sun comes it will shine out the clearer." He added: "There's some good left in this world, and it's worth fighting for."

The Lord of the Rings zoom reunion was just the latest installment in Gad's ongoing Reunited Apart YouTube series. The show, which has also brought back together the casts of Back to the Future, The Goonies, and Tom Hanks' Splash, is serving as an ongoing fundraiser for No Kid Hungry to fight food insecurity amid the COVID-19 pandemic. For anyone who needs a good trip back to Middle Earth, tune in to the broadcast, and prove Samwise Gamgee right by donating if possible.

More like this
Kukulkan From 'Wakanda Forever' Has A Surprising Connection To Marvel History
By Grace Wehniainen
Reese Witherspoon Confirms This Fan Favorite Will Return For 'Legally Blonde 3'
By Jake Viswanath
Taylor Lautner Copped To Finding Jacob "A Little Annoying" In Twilight
By Stephanie Topacio Long
James Cameron May Come To Regret His 'Titanic' Door Experiment
By Stephanie Topacio Long
Get Even More From Bustle — Sign Up For The Newsletter
From hair trends to relationship advice, our daily newsletter has everything you need to sound like a person who’s on TikTok, even if you aren’t.