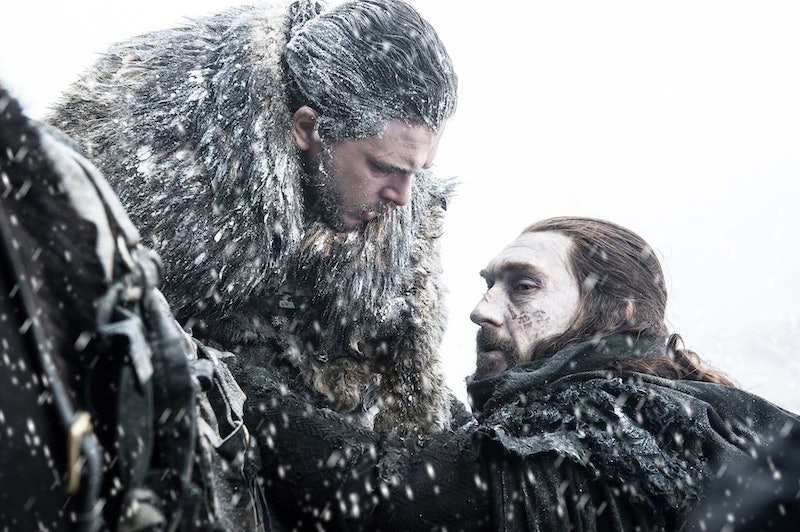 Look, let's talk about it. It's been a tough start to the year. Not only is our government in chaos and climate change waging war on the world, we've also got no new season of Game Of Thrones to help us get through it. However, there may be something equally as exciting to look forward to. And stans of the HBO fantasy series may be excited to hear about the Game Of Thrones actors that are now in the cast for Amazon's new series based on Lord of the Rings.

Amazon Studios have announced the first lot of series regulars who'll be starring in the new show, two of whom have already racked up some experience in the fantasy genre. Especially up north.

GoT fans will be happy to hear that Joseph Mawle, AKA Ned Stark's brother Benjen Stark, is featuring in the upcoming series. You'll probably remember Benjen as the absentee member of the Night's Watch who went missing while on an expedition beyond the wall. While he lay dying following an attack, he was half saved by the Children of the Forest, which made him sort of a white walker with a heart. I know, slightly confusing, but that's GOT in all of its glory really isn't it?

Then there's , who starred in the HBO hit as a young Ned Stark. He's most memorable as being present during the big reveal of the much speculated situation regarding Jon Snow's parentage. The episode that had viewers screaming at the television for more reasons than one, after it closed with Jon Snow getting intimate with Daenerys who, it transpires, was his flipping auntie.

And any How I Met Your Mother will recognise Nazanin Boniadi, who is also starring the Lord of the Rings-based show.

Actors you might not recognise but who are sure to become firm favourites include Sophia Nomvete, Tyroe Muhafidin, and Owain Arthur.

Hats off to you Amazon, we needed this news RN.

The series is to be based on stories from the much loved The Lord of the Rings novels written by J.R.R. Tolkien. The film franchise, famously directed by Sir Peter Jackson, remains a firm favourite with fantasy fans across the globe.

As with New Zealand native Jackson's films, the Guardian reports that the new series will be shot in his homeland. No surprise there as the New Zealand's magically lush, verdant landscape has become synonymous with Tolkien's Middle Earth.

The film franchise still pulls in a lot of tourist revenue for the country and, according to the Guardian, there was a titanic effort from the New Zealand government to ensure that the locations of the series remained firmly on Kiwi soil.

Production of the new series begins in February 2020 and a release date has yet to be announced.

More like this
Twitter Can’t Move Past *That* Secret Kiss On 'Love Island'
By Frances Stewart
The Future Of 'All Creatures Great & Small' Is Confirmed & Wedding Bells Are Ringing
By Rebecca Fearn and Frances Stewart
Regé-Jean Page Spoke Out On His Rumoured 'Bridgerton' Return
By El Hunt and Maxine Harrison
Here's How To Stream 'Downton Abbey: A New Era' & The New 'Downton' Channel
By Alice Broster and Sam Ramsden
Get The Very Best Of Bustle/UK