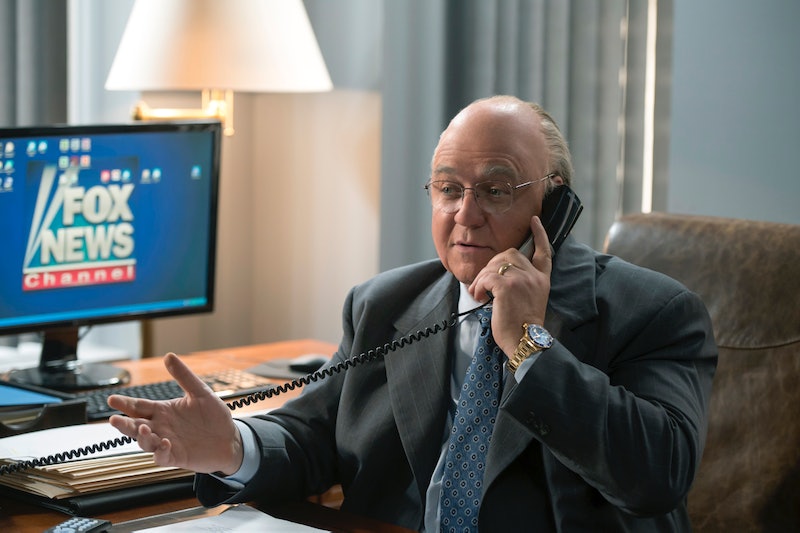 Fox News influences the political views of millions of viewers, but it wasn't always one of the country's most powerful sources of political commentary. Showtime's latest docuseries The Loudest Voice documents a decade in the life of founder Roger Ailes, showing how Fox News rose to the top of the cable ratings and also how the executive allegedly harassed the women who worked for him. And The Loudest Voice cast finds some significant Hollywood talent assuming the roles of the people that controlled the content on the network and enabled Ailes' actions.

At the center of this story is Russell Crowe as Ailes, former chairman and CEO of Fox News and eventual advisor for Donald Trump's presidential campaign. The cast of characters is filled out by other Fox News executives, including Rupert Murdoch. Perhaps the most notable character included in the series is Gretchen Carlson, whose sexual harassment lawsuit against Ailes reportedly led to his resignation in 2016. Former Fox News booker Laurie Luhn, who sued the network for $120 million for alleged harassment by Ailes, is also portrayed in the series; The real life Luhn has also sued Showtime for the series' portrayal of her relationship to the former CEO.

Here's who else is included in the cast.

While seeing big-name movie stars taking on a television role is hardly as surprising today as it was on a pre-Big Little Lies world, seeing an Oscar winning actor of Crowe's reputation take on a figure as controversial as Ailes is still bound to turn some heads.

Crowe, who is also an executive producer on the series, initially had no interest in the project due to his political disagreements with Ailes, but told The Hollywood Reporter that he loved the show's script and "if you read [a script] and it truly touches you and it gives you goosebumps, then that's your f***ing job, mate."

Watts said that her main goal with The Loudest Voice was to keep her performance as honest as possible. "It's a responsibility to tell the truth in the most compelling and honest way. You do want to do your absolute best," Watts told E!. "What [Gretchen] went through was extraordinary and awful. I just want to make it truthful. It matters to me."

Brian Lewis worked his way up the ranks of Fox News, to eventually become one of the only people who were willing to challenge Ailes. For all his effort, Lewis was fired after 17 years, according to AdWeek. Seth Macfarlane gives the character just the right amount of edge.

Elizabeth Ailes was Roger's wife for twenty years at the time of his death. The role involves heavy prosthetics, but Miller told Collider that she felt the makeup was worth it because The Loudest Voice is "a story that I wanted to look at right now — the inception of Fox News, how that came to be, and the effect that it’s having now."

As the founder of NewsCorp, Murdoch is the real wizard behind Fox News and Ailes' career. Simon McBurney is far from the most famous face on the show, but his contributions to film, television, and theater in England have earned him an assignment to the Most Excellent Order of the British Empire.

Laurie Luhn told the Intelligencer in 2016 that she had been the victim of "psychological torture" at Ailes' hands for up to twenty years. Luhn will be portrayed by Peaky Blinders' Annabelle Wallis in a performance that has already caught the ire of the real Luhn, inspiring a lawsuit against Showtime.

While Ailes' influence left a mark on millions of viewers, the show will be focusing solely on him and five other people that proved to be instrumental in Ailes' rise to power and his fall from grace in The Loudest Voice.