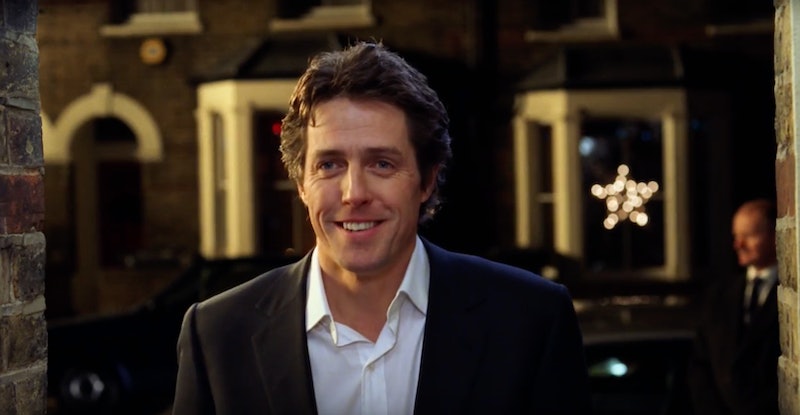 Love Actually is the definition of a problematic fave. From the accidental stalker story line to the homophobic rockstar to the insane lack of diversity, the beloved film is full of not so romantic love stories. So it shouldn't surprise fans to see that Love Actually fumbles a sexual harassment plot horribly. The storyline, between Prime Minister David (Hugh Grant) and Natalie (Martine McCutcheon), would be shocking to watch in 2017 if it wasn't so typical of the way we as a culture discuss and treat sexual dynamics in the workplace. The plotline is problematic for many reasons, but its most glaring offense is how it erases a female experience to focus on male character development.

The love story between David and Natalie in Love Actually could, potentially, be a sweet upstairs-downstairs story of a regular girl who falls in love with one of the most powerful men in England. Granted, the fact that David is her boss and definitely not her workplace equal poses a very obvious question about power dynamics and consent. But, for the most part, their flirtation is shown as completely consensual. And aside from David sometimes debating with other staff members whether or not Natalie would be considered "chubby," David is totally professional with her, despite his growing crush.

All that changes, however, when the president of the United States (Billy Bob Thorton) comes to town. Suddenly, what began as an innocent flirtation becomes a clear instance of sexual harassment and workplace misconduct. After leaving Natalie briefly alone with the president, David walks in on them standing very close together. The president is in a threatening position, encroaching on Natalie's space and leaning in, while she stands straight, clearly uncomfortable. There is absolutely no way one could look at their body language and conclude that this was consensual.

Natalie's feelings regarding her own harassment are never explored — she has no agency in the fallout of the incident at all. In fact, Love Actually doesn't acknowledge Natalie as a character outside of her relationship with David, making it easy for viewers to discount the trauma of what happened to her. After the incident with the president, the audience doesn't see her again until David comes knocking on her door on Christmas Eve. And once she does appear, her near assault is dismissed as something she feels guilty about because of how David might have interpreted it. The only concern is how these events affect the men involved, not the woman. The entire storyline, then, is just a way to further David's character development and give a British film the chance to take a subtle jab at the U.S. (The film was released in 2003, at a time when international feelings towards President George W. Bush were mixed at best.)

Furthermore, Natalie's early behavior in the film sets the stage for a "she asked for it" narrative to develop among viewers. During her introduction, it's established that Natalie isn't used to working in such a formal environment. She's a bit unpolished, unrestrained, and is never opposed to a good curse word. These character quirks are meant to be charming, but they can easily be used as evidence that Natalie must have invited the president's advances with her casual demeanor. (It's certainly something Natalie herself seems worried about.)

By ignoring Natalie's own feelings towards the sexual harassment she faced and making it clear that neither she nor David have any plans of making allegations against the president, Love Actually perpetuates the dangerous silence that often comes with sexual misconduct in the workplace. Natalie remains silent because she fears David won't believe her. David doesn't defend her, because he doesn't see why. And the president is free to sexually harass the next woman he meets.

The Natalie-David-president story line in Love Actually was always disturbingly familiar, but looking at it through the lens of 2017 it is especially prescient. As the year comes to a close, the United States government is coming face to face with the harsh reality of sexual assault and harassment in their workplace. Democratic senators Al Franken and John Conyers were forced to resign amid allegations of sexual misconduct, while the world watched in horror as the RNC rallied behind Senate candidate Roy Moore despite him being accused of assaulting multiple women when they were underage. Several women accusing Donald Trump of sexual assault and harassment, meanwhile, are demanding action, and we are just beginning to hold high-powered sexual predators responsible for their actions.

Men like the president in Love Actually are finally being taken down, while men like David — who witness harassment and do nothing — are being called out as complicit. Hopefully, if they made Love Actually today, the story would turn out very, very differently.

More like this
Gassed Up Promises All Things Action, Risk, & Redemption
By Frances Stewart
Twitter Is At Odds Over Taylor Swift’s Possible ‘All Too Well’ Oscar Run
By Brad Witter
Revisit 1992’s 'A League Of Their Own Cast' Photos After The New TV Series
By Grace Wehniainen
Jodie Comer & Tom Hardy Join A Motorcycle Gang In The Bikeriders
By Catharina Cheung
Get Even More From Bustle — Sign Up For The Newsletter