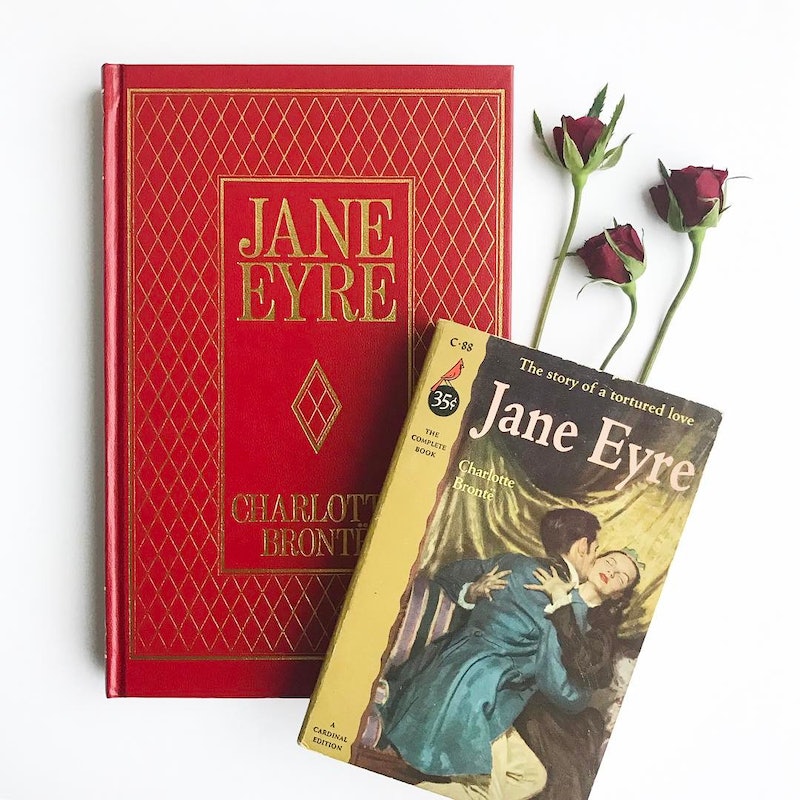 If you've read Jane Eyre before, you are no doubt familiar with the "madwoman in the attic." And if not... allow me to quickly bring you up to speed: in Charlotte Brontë's 1847 novel Jane Eyre, the titular Jane works for the sexy, mean Mr. Rochester in his creepy mansion, Thornfield Hall. There are always mysterious noises in the house at night, and someone keeps setting things on fire, but Jane has a crush on her dark, brooding boss, so she lets it slide.

Rochester negs Jane until she admits her feelings for him, and the two make it all the way to the altar when suddenly, some dude crashes their wedding to dramatically reveal that Rochester can't marry Jane because.... he's already married! And his wife is locked in the attic.

Bertha Mason, Rochester's first wife, was a beautiful Creole woman from Jamaica, who Rochester married years ago before she had a mental breakdown and, naturally, had to be locked in the attic forever.

And perhaps the creepiest part of the story is that it's true.

Well, it's based on the truth, anyway.

In 1839, Charlotte Brontë visited a medieval manor house called Norton Conyers. The grand house is still open for visitors today, and bears a striking resemblance to the descriptions of Thornfield Hall. Being a Brontë, though, Charlotte was immediately drawn to the secret attic passageway: Behind a hidden door in the wall paneling, a secret staircase leads to a small corner of the attic known as "Mad Mary's Room." The story went that years ago, Mary had been confined to that room by the rest of the family, either to protect her or to hide her in shame.

Around the time of her visit, Brontë was unhappily employed as a governess for the wealthy Sidgwick family. When she sat down to write Jane Eyre a few years later, she combined the experience of a young, awkward, impoverished governess with the rumors of a woman locked in the attic, and threw in an unfriendly love interest for good measure.

The secret staircase was re-discovered by the owners of Norton Conyers in 2004, who connected it with the legend of "Mad Mary."

Of course, we don't know much about Mary herself, or even what else Brontë might have heard about her. We don't know whether she was married, or from Jamaica, or even what sort of "madness" she exhibited. What we do know is that confining mentally ill relatives to the home was, unfortunately, often the more humane option at the time. English treatment for mental illness in the 1700s and 1800s mostly consisted of committing patients in prison-like asylums and "treating" them with straitjackets, chains, bloodletting, induced blisters, and the like. Many patients did not survive the process.

But still, I think most of us can agree that "lock your wife in the attic and pretend she never existed" isn't a great solution, either.

We can also guess that Mary was less enamored of fire than Bertha, since Norton Conyers is still standing to this day. In Jane Eyre, Bertha eventually burns down Thornfield and dies by suicide.

One the one hand, Brontë's "madwoman" is a tragic figure, a literary manifestation of Jane's own feelings of oppression, passion, and confinement as she is constantly hemmed in by her class and her gender. But on the other hand... Brontë definitely took the life of a real mentally ill woman and transformed her into a Gothic monster, with some bonus colonial bigotry that seems to conflate her Creole heritage with her "beastly" behavior. That's not great.

We'll never know what Mary herself would have thought of her literary legacy, but if you happen to be in North Yorkshire, England, you can still visit Mary's secret staircase, leading up to her quiet, hidden corner of the attic.

More like this
The 'Firefly Lane' Book Ending Teases Way More Tears To Come In 2023
By K.W. Colyard
'Bridgerton' S3 Teases Exciting Social Season For Penelope Featherington
By Bustle
The 'Lady Chatterley's Lover' Book Leaves Us With A Troubling Question
By Catharina Cheung
A 'Sex Education' Star Is Leading Your Next Fave Thriller
By Darshita Goyal
Get Even More From Bustle — Sign Up For The Newsletter