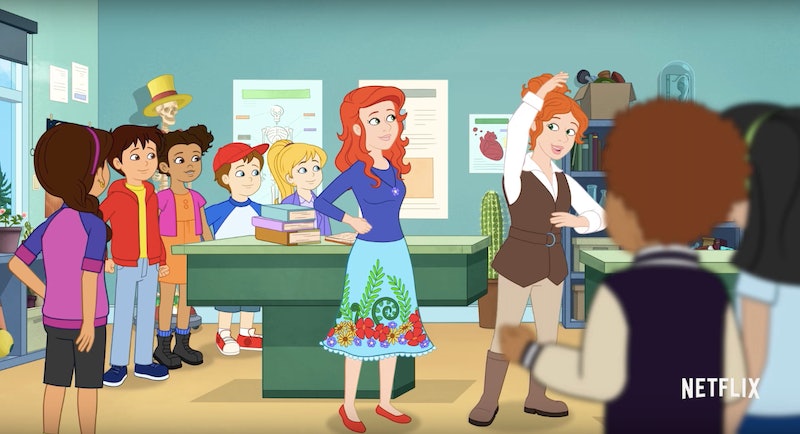 Hollywood clearly understands that the way to any millennial's heart is by mixing technology with a heavy dose of nostalgia. Just look how many reboots and remakes have popped up on streaming services in the last few years. And now, 10 years after The Magic School Bus last did its stuff, '90s babies can rejoice! The beloved series gets reimagined when The Magic School Bus Rides Again arrives on Netflix on Friday, Sept. 29. But, as one can expect, the Netflix Magic School Bus series vs. the original reveals some major differences.

Based on the book series of the same name, the original show followed the fun and occasionally outrageous adventures of an elementary school science class. Led by the eccentric Ms. Frizzle and voiced by Lily Tomlin, the class would go on field trips one could only dream about as a kid. The magical bus — which could fly, travel through time, and shrink — took them to outer space, through prehistoric ruins, and occasionally a student's digestive system. Best of all, the bus would coyly smile as it was "cruising on down Main Street" before it transformed and started "swingin' through the stars." Can you feel the nostalgia yet?

In the new series, students from the original class, like Arnold and Ralphie, join newcomers like Jyoti, a tech-savvy wiz-kid. And with the creation of social media, smartphones, and the uptick of video chatting devices — fans can expect plenty of high-tech changes. Here's everything else we know about Ms. Frizzle and the gang since we last buckled our seat belts.

Probably the biggest change from the original series is that there's a new Ms. Frizzle in town. After she drops into the class from the sky, students are introduced to Fiona Felicity Frizzle. Voiced by Kate McKinnon, the equally quirky, but slightly less eccentric Frizzle sister takes the keys to the magic bus and will be leading the class' wild adventures from here on out. She even has Lizzy Frizzle, her sister's pet Chameleon by her side.

Hands down, one of the best parts about watching The Magic School Bus growing up was singing along to the theme song. Just hearing it will instantly transport you back to 1994. And, while the reboot will feature the same catchy tune and lyrics as the original, Hamilton composer Lin-Manuel Miranda takes over the vocals for Little Richard.

The Original Ms. Frizzle Is Now A Professor

Valerie Frizzle (who knew Ms. Frizzle's first name was Valerie!?), has officially handed over the reigns to her bus and class. We're not exactly sure where's she headed to next, but get this: She's now a professor! Seems like in the last 10 years Ms. Frizzle became a student again and earned a doctorate degree. Hopefully she'll make an appearance on the reboot. That is, if she's not too busy teaching college-level classes nowadays.

The Bus Got A High-Tech Makeover

Of course, with technology being where it is in 2017, the magical bus had to undergo some pretty big changes. How much do you want to bet it even has wifi and phone chargers built into it? In addition to the bus getting an upgrade, the reboot will also will highlight innovations like robotics, wearables, and camera technology in hopes of sparking children's continued interest in science and innovation, much like the original series did.

Professor Frizzle Now Has A Monkey

With her sidekick Lizzy sticking around the classroom to hang with Fiona, Professor Frizzle had to find a new pet. And in true Frizzle fashion, she didn't just adopt a regular dog or cat. Instead she's now got an adorable little monkey named Goldie on her shoulder. Also, Professor Frizzle now rides around on a super cute magical scooter that's like a baby version of her bus.

So get your permission slips ready! Because although the reboot may have a new Ms. Frizzle and an updated theme song, it looks like it will be just as fun as the original to watch.

More like this
Every Horror Movie Reference In The 'PLL: Original Sin' Premiere
By Alyssa Lapid
'The Sandman’s Ending Is A Departure From Neil Gaiman’s Comic Book Series
By Kadin Burnett
Netflix Just Rebooted A Classic ‘90s High School Drama
By Maxine Harrison
You Can Now FaceTime With 'Bridgerton's Regé-Jean Page
By El Hunt
Get Even More From Bustle — Sign Up For The Newsletter