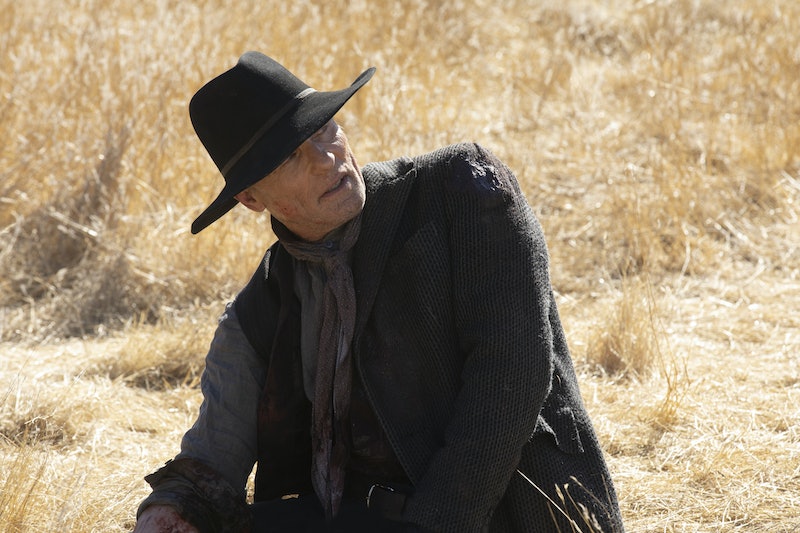 Major spoilers for the Westworld Season 2 finale ahead. In the midst of the flurry of mysteries that are solved by "The Passenger" — and the utter avalanche of new ones that are introduced — there was one lingering question asked by fans over the course of the season that isn't given a concrete answer. The Man In Black's fate on Westworld is left frustratingly ambiguous for those who were hoping for a satisfying conclusion to the villain's story. The Westworld Season 2 finale's post-credits scene simultaneously plays into a popular fan theory while still refusing to provide a neat solution… and so the debate will continue during the long wait for Season 3.

A large part of the HBO show's first season revolved around the identity of the Man In Black, who was eventually revealed to be an older version of William, the young man who visited the park in its early days and fell in love with Dolores — and then soured when she was reset on her loop and "forgot" his very existence. And a large part of the HBO show's second season revolved around the nature of the Man In Black, as fans debated whether or not Old William was actually a host this whole time, turned into an immortal and artificial version of himself by Ford sometime after an undisclosed offscreen death.

The penultimate episode of the season, "Vanishing Point," ended with the Man In Black digging inside his own arm, looking for a hard port to definitively prove his own paranoia that he's a host. When Dolores comes across him at the beginning of the finale, she gloats that now it's her old frenemy's turn to question the nature of his reality… but viewers don't get an answer as to what, if anything William found in his arm.

After Dolores leaves William for dead in the desert outside the Forge with a mutilated hand, the last viewers see of him is as he stumbles into the elevator to go after her. Then, he's not seen again until his unconscious form is seen lying on the beach, awaiting for evacuation by Delos. What happened in the meantime? The tantalizing post-credits scene answers that question… sort of.

When William finally limps into the Forge, he finds the facility completely destroyed. When his dead daughter Emily steps out of the shadows to meet him, William assumes that he's inside a simulation; a notion Emily quickly contradicts. (He know she's telling the truth because the scene doesn't happen in the same narrow aspect ratio that differentiates all the scenes that happen inside the Forge or the Cradle.) Eventually, father and daughter walk into the round room previously occupied by James Delos — now buried under a layer of sand — and they sit down as Emily prepares to test William for "fidelity."

Fans who subscribe to the theory that William is a host will likely see this as proof that they're correct; but there is still room for doubt. First of all, when is this scene even taking place? Perhaps between when Dolores sabotaged the Forge and when the QA team arrived to restore it? But when William walks into the Forge in this sequence, it looks different, lit by faint sunlight rather than ominous red lamps. Even when the QA team enters the Forge after Dolores sabotages it, those red lights are still pulsing. So does this scene between William and Emily take place after that? It can't, because by that point he's lying on the beach unconscious, right?

There could be a logical explanation for this sequence coming in Season 3… or it could all be a delusion, a final break from reality for William that began in "Vanishing Point" and was completed when he tragically murdered his own daughter. At that point, William would desperately want to be a host, to believe that he wasn't in control of his own actions — and therefore wasn't responsible for Emily's death. Of course, as the finale reveals, he's not responsible even if he is human, because our minds are basically simple and predictable code, there's no such thing as free will, and we're all just helpless passengers in our own bodies.

So, is William a host? Or is he simply a human who's gone insane? (What humans define as sanity, after all, is actually a very narrow range of behaviors, as Bernard says to Dolores in the finale.) It's going to be a long wait to find out, since Westworld Season 3 isn't expected to arrive until 2020. That will give fans plenty of time to come up with even more elaborate theories before the show returns to confound them all over again.

More like this
'Cheers' Stars Pay Tribute To Kirstie Alley After Her Death To Cancer At 71
By Jake Viswanath
17 Photos Of The 'Wednesday' Cast Vs. The 1991 'Addams Family' Cast
By Grace Wehniainen
Is Blake Lively Or Penn Badgley The Richest 'Gossip Girl' Star From The OG Series?
By Hugh McIntyre
The ‘White Lotus’ Cowboy Theory May Spell Danger For Tanya
By Grace Wehniainen
Get Even More From Bustle — Sign Up For The Newsletter