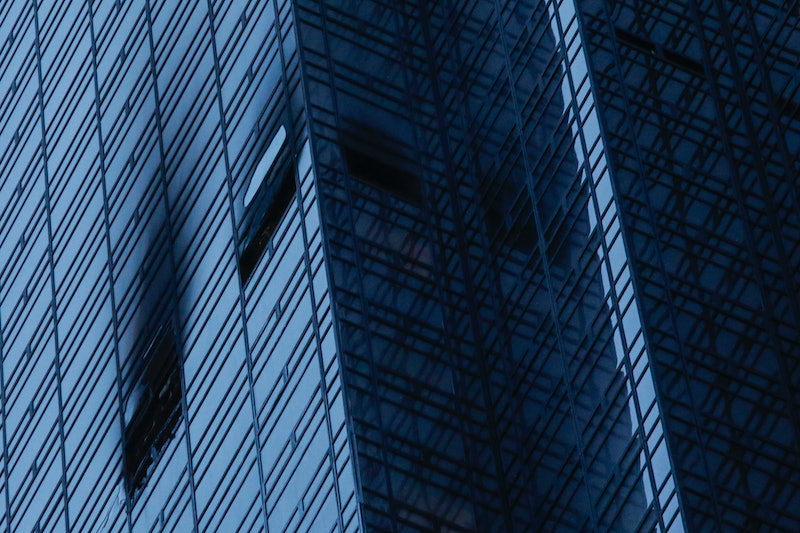 On Thursday, The Washington Post reported that the residential board for Trump Tower was suing the man who died in a fire on the 50th floor of the building in April. The Post reviewed a complaint filed on Tuesday in the Supreme Court of New York County, which reportedly indicated that the Residential Board of Trump Tower Condominium, with the help of Trump Organization attorney Sonja Talesnik, was seeking almost $90,000 from the late Todd Brassner, who was a resident at Trump Tower.

Bustle has reached out to the Trump Organization for comment. Of that nearly $90,000 amount, The Post reported that the Residential Board of Trump Tower Condominium was seeking over $64,600 from Brassner in unpaid common charges. A common charge is a fee charged by a condominium complex for covering expenses related to maintaining the apartment, repairs, and utilities. According to the complaint reviewed by The Post, Brassner had defaulted on the common charges in June 2015.

The Post reported that Brassner was a "longtime" Trump Tower resident who had a knack for collecting multimillion dollar art pieces as well as vintage instruments. Per the publication, Brassner died in an accidental fire on April 7 after an electrical fire engulfed the apartment. According to the New York Fire Department, his apartment did not possess a fire alarm or sprinklers.

Trump has a history for lobbying against the installation of sprinklers in residential buildings — a critical and often life-saving feature. In the late 1990s, when Rudy Giuliani was the mayor of New York City, two horrific fires rattled the residents of the Big Apple. One took place in Brooklyn on Dec. 19, 1998, according to The New York Times. The monstrous blast brought more than 150 firefighters to the scene to tame the flames, per the newspaper.

Then, just days later on Dec. 25, 1998, another fire took place in the city in Manhattan's Upper West Side, claiming the lives of four residents. Neither building had functional sprinklers. The back-to-back fires compelled Giuliani, according to The Post, to call for legislation that would require residential complexes to have working sprinklers.

But Trump at the time pushed against such a requisite on financial grounds. According to The Post, Trump argued against retrofitting sprinklers in old buildings because of how supposedly expensive it would be: $4 per square foot.

Shortly after Brassner's untimely death in the fire in April, his friends spoke with The New York Times about the art collector who possessed Jack Kerouac and Mati Klarwein's artwork, and a portrait of himself created by Andy Warhol, among other big names. His friends said his health was deteriorating and finding a prospective buyer for his condo seemed impossible given the security detail the Trump Tower.

One of Brassner's friends, Stephen Dwire, told The Times, "It haunts me. [Brassner] said, 'This is getting untenable.' It was like living in an armed camp."

"But when people heard it was a Trump building," Dwire said, "he couldn't give it away."