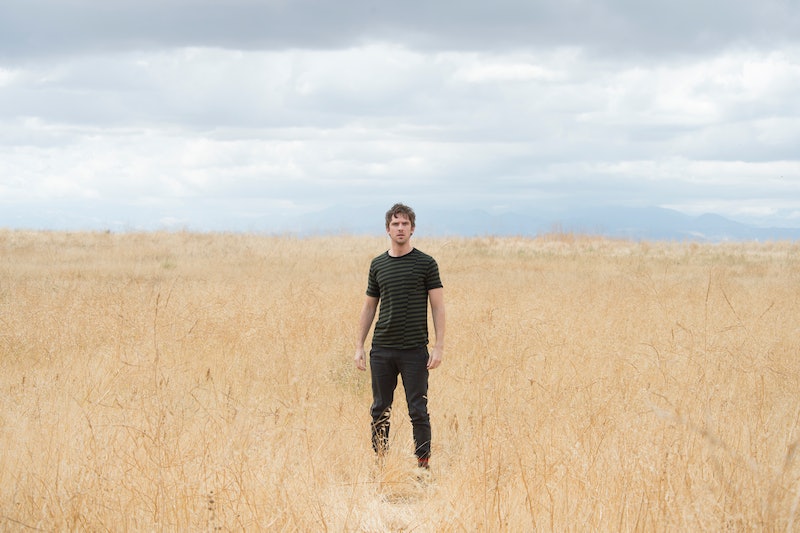 Legion, the Marvel series that airs on FX, isn't one for big crossover events and caped crusaders. The way that mutants and other elements from the X-Men comics seep into the storyline is a bit more subtle than other comic book series. The Marvel Easter Eggs in Legion Season 2 hint at ways that more comic characters could appear on the show, but also maintain that David Haller's weird world is totally separate from the hoards of other superhero shows on the air.

There are three small possible references in the show's April 3 return. First, Ptonomy (Jeremie Harris) mentions the "new mutant threat" — which could be a reference to the team that appeared in the '80s and originally included Marvel characters Psyche, Wolfsbane, Karma, Sunspot, and Cannonball. A film adaptation of The New Mutants will be released in 2019. Those mutants were created in a lab, so it fits the science fiction tone and style of Legion.

Ptonomy also mentions "the Lazarus affair," which is news to Legion fans. Summerland is out, and Division III is headquarters for our heroes now. Ptonomy tells David that after this event, the Divisions were created. What is the Lazarus affair, exactly? Well, there is a character in Marvel comics named Lazarus. Part of a government genetics research project in Florida called Armageddon, he was created as a weapon. He had mind control powers, and his mother Beatrice thought he was too dangerous to be in the world and sought to have him destroyed. His sister, Domino, is a more prominent Marvel character who will be featured in the upcoming Deadpool 2, played by Zazie Beetz from Atlanta — another FX series.

Coincidence? Easter egg? Keep your ears perked for more information about the Lazarus affair on Legion. Especially because if you look closely at the diagram of the Divisions, you'll note that their logos are numbered like dominos. Curiouser and curiouser. Even if Domino doesn't show up herself, references like this show what themes and ideas from the comics Legion has chosen to freely adapt.

That's it for the more blatant (though still only potential) Marvel Easter eggs in the first episode. However, even elements of this show that aren't overtly of the comic book universe For one thing, Division III's hexagonal design seems to be almost intentionally the opposite of the "X" symbol. It's geographic, but looking outward rather than pointing in.

It's a stretch, but was David's request to "boost my signal" a reference to cerebro — Professor X's device that expands and focuses his mental abilities, allowing him to detect mutants everywhere? Xavier did develop cerebro after meeting Amahl Farouk, the villain from Legion, and deciding to dedicate his life to protecting good mutants.

The device on Legion may have looked more like one of Eleven's sensory deprivation chambers on Stranger Things than something from a comic book, but it seems to have a similar purpose. Will we ever see Professor X, who in the comics is David's father, on Legion? That still seems unlikely, but he sort of appeared in Season 1 as a chalk drawing. It could happen.

In Episode 2, when he goes to talk to Farouk David sits in a cross-legged battle pose that comic books fans will recognize. At the end of the episode, Kerry has full-on white Rogue streaks in her hair. Interesting — because in the comics, Rogue has an aunt named Carrie.

David also discovers that the sing-songy mustache ladies are androids called Vermillion, which is not in Marvel comics. Are they predecessors of the infamous sentinels, which X-Men comic and movie fans know all too well? They played a major role in Days of Future Past, which also bears a striking resemblance to Syd’s “quest” in Season 2 to reach David and change time in order to avoid a potential apocalypse.

Are the monks in Episode 3 related to the Silent Monk from Marvel comics? Their red accessories and head markings could indicate that this is the Silent Order. His Pied Piper skills don’t appear to be an Easter egg, but in case you were wondering there is a cow in the comics — one of them a Deadpool comic. Speaking of Easter eggs, however, Melanie’s adventure game is more of an old school one, unrelated to X-Men. Maybe the minotaur in a doggie wheelchair was supposed to be a Professor X reference, but it’s more likely just Melanie’s mind running wild.

The fourth episode back has a different sort of reference to the comics. In her virtual flashback maze, young Syd is at a museum looking at an Edon Schiele exhibit. According to Vulture, Schiele’s work was an artistic inspiration for the Legion comics. Other than that, there’s not much in the way of specific Marvel references in this or Episode 5.

In the sixth episode, the various potential Davids nod to different aspects of the X-Men comics. He’s bald in one future, like his father. He’s almost Magneto-esque in another, lording over a fancy pool party and using his powers to his own advantage. Also, the “multiple worlds” or “multiverse” theory is not just a real concept in quantum mechanics, it’s one often used by comics, including Marvel. Speaking of Magneto, when Ptolomy is used to “create a mind that can’t be read,” that’s something Magneto was able to achieve with a goofy helmet.

Words are important to Easter Eggs on a show as sometimes vague as this one, and in Episode 8 the characters say “The Professor,” referring to David Haller’s father Charles Xavier, out loud. Weird that none of the multiverse scenarios in the previous episodes involved him joining the X-Men, isn’t it?

In Episode 10, David again appears in costuming resembling an alternate-universe comic book character — from X-Men Legacy Vol. 2, also known as David-616 — watching the events unfold in a kind of crystal ball. Melanie also refers to her universe’s David as “Legion, the world killer” in the episode. Even the talk about David potentially being the villain in the story feels like a nod to the many types of character that David becomes in the comics. Is the demonic beast who shows up at the end of the penultimate episode from the page? Likely not, as Melanie’s minotaur more closely references the labyrinth Farouk created for her earlier in the season.

Creator Noah Hawley, in an interview with CinemaBlend, explained how references work on his show. He said:

"Fans who are really familiar with that world appreciate certain connections and being rewarded for knowing the story so well. At the same time, my goal is to always use character as a way to have a conversation, and tell a story that was my story and was interesting to me to try and get to the heart of who this character is and this journey for him without re-enacting storylines from the comic book. So you won't see the show suddenly be beholden to the comic books for storyline, but you may see ideas, characters or images that are familiar to you."

In a way, that just gives fans more detective work to do. The Marvel Easter eggs on Legion drift in and out of this experimental show and are just one of the more captivating elements — whether you're admiring the details or scrutinizing for clues and references.