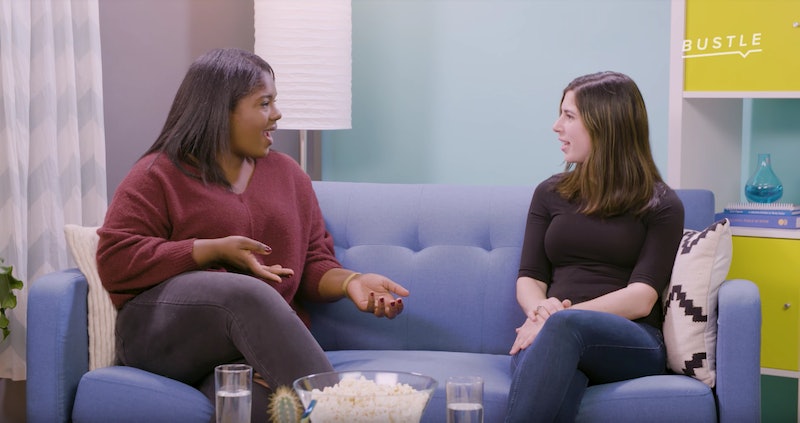 If you're unable to sit still out of excitement for Season 2 of Amazon's breakthrough series, The Marvelous Mrs. Maisel, you're not alone. The host of Bustle's new web series, Bustle Breakdown, Mariah Smith, and her guest of the week, Bustle's Entertainment News Editor, Rachel Simon, couldn't wait to talk about their excitement for the hilarious show's' return on Dec. 5. Both Rachel and Mariah agree that Season 2 of The Marvelous Mrs. Maisel is bound to be an exciting one, and they even have a prediction for Midge Maisel's misadventures that might unfold next season.

After well over a year-long wait since Season 1 of The Marvelous Mrs. Maisel premiered in March of 2017, it's finally almost time to watch Midge (Rachel Brosnahan) and Susie (Alex Borstein) reunite on screen in their attempts to make Midge a big comedic star. Yet as much as everyone wants to see Midge rise to the top, it seems like Season 2 will have just as many setbacks as it does breakthroughs — just like the first season.

For instance, as important as Midge's comedy career is to the Emmy-winning series, Rachel and Mariah focus on a big cliffhanger from the end of Season 1: will Midge and her ex-husband Joel (Michael Zegen) get back together? They sort of reunited towards the end of Season 1, but then Joel saw Midge perform a perfect stand up set before berating Susie while sneaking out of The Gaslight. During their round of the game "Predictaball," Simon guesses that Midge and Joel will get back together, but it might not go smoothly. "My theory is that he's gonna hide the fact that he saw her perform, so she thinks everything's smooth and great. And somehow of course it's gonna blow up and come out," Rachel says.

Mariah then points out that the news that Zachary Levi joined the cast of Mrs. Maisel could make him a new love interest for Midge. Something Rachel, a die-hard fan of the show, says she'd like to see. "She hasn't really had another love interest other than Joel so like I hope that happens for her," Rachel explains.

As exciting as it might be to watch Midge explore new romantic territories, the trailer for Mrs. Maisel's second season doesn't hint at a new romantic subplot. Instead, the trailer shows the ex-housewife and her family venturing outside of New York City. While it may have been a big leap for Midge to travel from the Upper West Side to Greenwich Village in Season 1, it'll be interesting to see how she navigates the comedy scenes elsewhere.

Rachel predicts that performing in new places could provide new obstacles for Midge: "I know that they filmed part of Season 2 at least in the Catskills, and in Paris, and I don't know what happens there, but I can imagine she's gonna be criticized for her gender or that she's gonna meet other comics that are better than her." Mariah quickly adds, "Or more established."

The road could be rocky ahead for Midge Maisel, but it's bound to be just as hilarious throughout the whole wild ride.