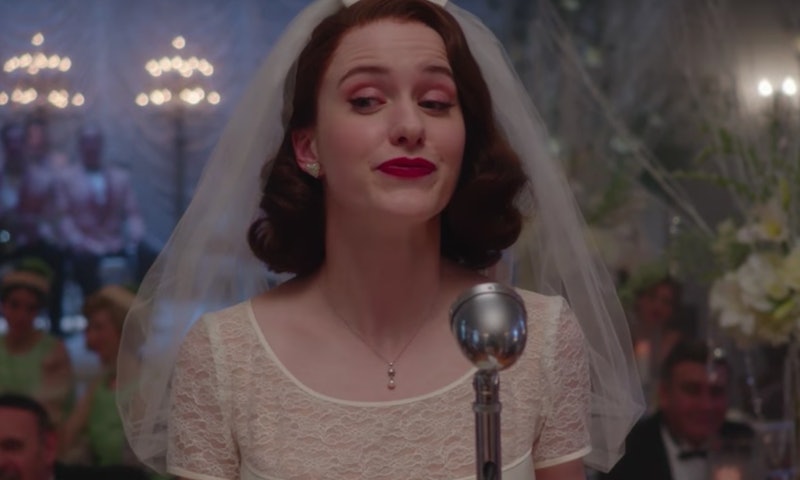 It's only been a month since the comedy series was showered in Emmy-nominations, but the cast and crew of The Marvelous Mrs. Maisel is opening up about Season 2. Production on the second series of the show has begun, and the cast and crew discussed the upcoming episodes at a Critic's Association Tour panel on Saturday, according to Variety. It sounds like there will be plenty of new challenges and trials ahead for Midge Maisel and the other characters, including the changing political landscape of the late 1950s.

Creator Amy Sherman-Palladino noted that the series, which is set in the late 1950s, will reflect the changes society was facing at the time. As reported by Variety, she said the show will be "a bit of the reflection of the politics that are going on" as the title character is "going through a change and realizing the box she was put in."

The first season of the Amazon series left Midge in a good place. She had a breakout moment as a stand-up comedian, coming into her own on stage and settling on her identity as a performer. However, there will be more challenges ahead, including facing a society that silenced women. In the 1950s, women rarely were given a public platform, and it was even more unheard of for a woman to be a comedian. "We are dramatizing a woman's struggle at a time when she wasn't supposed to have that voice or make those changes," Sherman-Palladino reportedly said. "Women are still trying to break out of that box — hooray for no progress from the '50s."

While Sherman-Palladino didn't want to "mimic or capitalize or mine" the political landscape in a way that felt disingenuous, it felt important to reflect the challenges of the time. She explained,

"As writers you want the diversity because you want to express the world. It's interesting to try and find that balance and try and represent a 1959 that is true to what 1959 was in a sense because what you don’t want to do is pretend there are no problems and pretend these things didn’t exist."

The show isn't going to shy away from the political next season, but Midge's personal struggles will also be a focus. In Season 1, Midge and her ex-husband Joel rekindled their romance, but her comedy career will complicate their relationship. The two have children together, and the cast promised their co-parenting will be a source of tension. According to Michael Zegen, who plays Joel, his character will struggle with accepting Midge's comedy talent. "He's kind of stuck between a rock and a hard place because on the one hand he loves Midge and he saw that she was really talented," Zegen said, according to Variety. "But on the other hand, it's a big blow to his ego that she's really talented."

In the meantime, Midge's manager, Susie, will continue to grow as a character. Alex Borstein, who plays the character, promised that her friendship with Midge will bring new depth to Susie. Borstein said,

"She's changing — every single molecule's shifting, but she's so excited. She finally found the great love of her life, which is Midge and I mean that in a larger sense, not in a romantic one."

There's a lot of pressure for the cast and crew heading into the second season. The show received critical acclaim, and took home several Golden Globe Awards. In July, the series was nominated for 14 Emmy Awards. According to Sherman-Palladino, the internal pressure is bigger than the many accolades. "We have such an amazing group of actors, and when you have a group of actors of this caliber, that means the stories and the scripts and the dialogue have to be of a certain caliber or we're doing a disservice,” she said. “So that is a self-imposed nausea that's always there.”

Despite Sherman-Palladino's assertion that maintaining the show's high standards can be nerve-wracking, it sounds like Season 2 is on track to tackle tough issues with the wit and wisdom fans have come to expect from the series.

More like this
Our First Look At 'Vardy V Rooney: A Courtroom Drama' Doesn’t Disappoint
By Bustle UK
Ciarán Griffiths Is Making His 'Corrie' Comeback
By Catharina Cheung
'Doctor Who's New Companion Has Been Winning Acting Awards Since She Was 18
By Shahed Ezaydi
Here’s How 'The Crown' Will Cover Princess Diana's Tragic Death In Season 6
By Brad Witter
Get Even More From Bustle — Sign Up For The Newsletter