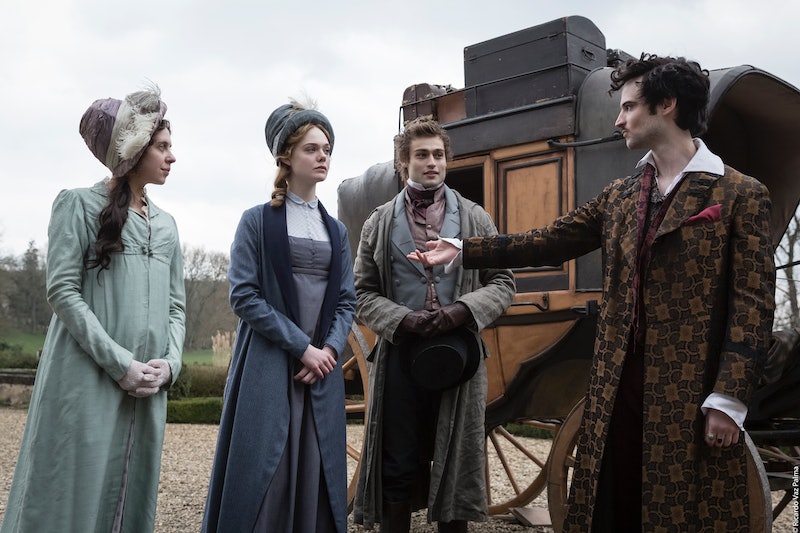 The gothic horror novel Frankenstein or The Modern Prometheus is lauded as one of the originators of the style, but its author, the teenage Mary Shelley, has never quite gotten her due for inventing the genre of science-fiction as a result. Yet today, that's changing; not only will the third season of NatGeo's Genius be devoted to Shelley, but Mary Shelley, starring Elle Fanning as the titular writer, will open in theaters on May 25. The movie explores the author's feminist upbringing and how her own experiences with grief, death, and maternity came into play when she wrote of an arrogant man who created a monster. But what the film also illuminates is just how much Frankenstein may have been inspired by the awful actions of the men in Shelley's own life, and it'll make you view the classic piece of literature in a whole new light.

The movie introduces Mary as a teenager whose life had been heavily influenced by the radical philosophies shared by her parents. Mary's mother, Mary Wollstonecraft, died just days after giving birth, but her early feminist writing in such works as A Vindication of the Rights of Woman and her radical views permeated the young Mary's life and influenced her way of thinking. Mary's untraditional upbringing as the daughter of unwed parents and their modern philosophies on marriage presumably contributed to her own unmarried dalliance with future-husband Percy Bysshe Shelley (Douglas Booth) and their liberal lifestyle. But one lesson Mary seemingly learns in the film is that freedom doesn't always amount to a better life.

She chose a life with a man who believed in "free love" and who felt he was meant for adventures beyond the limits of marriage. Her father was the same way, and her parents shunned the traditional union of marriage. But despite Mary believing in these freedoms, a radical notion for her time, she still suffered at the hands of the men in her life. Her father hypocritically shunned her for choosing to be with Percy, a then-married man. Percy's own extramarital adventures, as presented in the movie, make him come off more like a 20-something man-child who can't keep it in his pants rather than a philosophical revolutionary. And Lord Byron, who hosts the Lake Geneva get-together that results in Mary's idea for Frankenstein, is viewed as a male chauvinist who tries to play off his promiscuity like it's a rejection of some kind of traditional prison.

Eventually, Percy's constant debt and the lifestyle of moving frequently as a result not only grates on Mary's creativity, but also tragically causes the death of her first child. They must abandon home after home, with little regard to health or safety, in order to indulge Percy's "freedom-loving" lifestyle. With that kind of inspiration, it's sadly no surprise that man's abandonment of his responsibilities and rejection of his creations is a major theme of Frankenstein. Shelley's novel emphasizes the idea that men leave things without thinking of the consequences, while women are left to pick up the pieces.

Mary Shelley also explores how sisterhood ends up being a stronger power than that of male companionship. Throughout the film, Mary's true devotion is to her half-sister, Claire Clairmont (Bel Powley). When Mary's father sends her away to Scotland for a change of scenery, Claire fakes ill in order to lure Mary home. The scheme works, and Mary promises to never abandon Claire again. When Percy and Mary plot to run off together, Claire reminds Mary of her promise, and Claire ends up tagging along on their adventures. It's unfortunate, then, that it's suggested that as the young, rebellious lovers romp around Europe together and Mary comes to be with child, Percy and Claire also find themselves attracted to one another and fall into an affair themselves.

Still, when Claire is later seduced and impregnated by Lord Byron and cast aside by his wanton ego, Mary remains a steadfast presence in her sister's life. Despite the fact that Claire likely had an affair with Percy, Mary supports her sister through her pregnancy and trying time as a single mother. It's as if their bond is stronger than that of any of their male counterparts. "You don't need anything from hem," Mary says to Claire at one point in the movie, encouraging her half-sister to embrace the female independence growing in society.

This sisterhood strength may also reflect Mary Shelley's feelings on another forgotten sibling, older half-sister Fanny Imlay. As another writer, Sady Doyle, theorizes, Dr. Frankenstein's unfortunate creature is actually a stand-in for her elder half-sibling. The unwanted child, whose scarred face and untimely birth meant her abandonment by her biological father, ultimately led to her suicide. Frankenstein, Doyle says, "Is one woman giving her sister revenge."

It's this poor treatment by Percy, and Claire's abandonment by Lord Byron, that the film suggests inspires Mary to complete Frankenstein. Considering that the novel itself can be read as a feminist manifesto for the consequences of male hubris, it makes sense then that these men, who continuously abandon their creations and deny their responsibilities, inspired the character of Dr. Frankenstein. "Men appear to me as monsters," she says in the film, "thirsty for one another's blood."

Knowing that Mary Shelley's early experiences with death, the loss of her mother, and the deaths of her children influenced the author's gothic writing and the tragic tale of man and monster, it gives the book a new twist to consider that the men in Shelley's life possibly were the monsters.