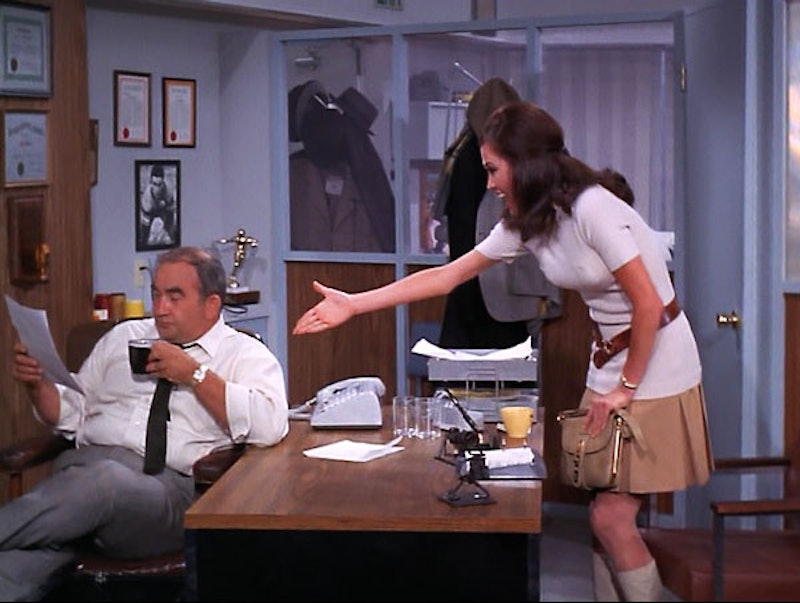 Before Liz Lemon, Cristina Yang, or Khadijah James, there was Mary Richards. The single, 30-year-old, career-driven woman who moved to Minneapolis, Minnesota during the 1970s in relentless pursuit of her television dreams was out to prove she could "make it after all." And in just seven years, she did all of that and more. The Mary Tyler Moore Show was not only a trailblazing program for Hollywood, but also for women both in front of and behind the camera. Never shying away from topics such as equal pay for women, abortion, and birth control pills, you don't need to go far to understand how impactful The Mary Tyler Moore Show was in terms of feminism.

For a series that centered on a young professional woman back in the day navigating the male-dominated television news field without a husband in sight, Moore's character showed that young women could do, and become, more than what society expected. Decades later, the rampant and refreshing feminism that emanates from the iconic comedy is more prominent than ever. Just turn on your TV. Women are seeing themselves more and more depicted as television executives, lawyers, doctors, vice presidents, activists, movie directors, and all around boss ladies like Mary Richards grew to be.

It's amazing to think that this precedent of normalizing self-sufficient women in the workplace was worked on by 25 women writers among a team of 75 back in 1973, according to MeTV. As women such as Lena Dunham and Issa Rae continue to helm their own shows as writers, actors, and directors decades after the debut of The Mary Tyler Moore Show, it's important to note that just 29 percent of TV writers were women in over 40 years later in 2014 based on a report by the Writers Guild of America. Author Jennifer Keishin Armstrong, who wrote Mary and Lou and Rhoda and Ted: And All the Brilliant Minds Who Made The Mary Tyler Moore Show a Classic, told IndieWire the input of women writers was a "testament to gender diversity." She continued, "It made a huge ripple-effect difference in the industry in ways we probably can't even begin to measure."

Although her work as a lawyer is a far cry from the television industry, former First Lady Michelle Obama told Variety in August 2016 that she credited the Mary Richards character as a great influence regardless of their different professional fields:

“She was one of the few single working women depicted on television at the time. I was probably 10 or 11 when I saw that, and sort of started thinking, ‘You know what? Marriage is an option. Having a family is an option. And going to school and getting your education and building your career is another really viable option that can lead to happiness and fulfillment.'”

In addition to its humor, The Mary Tyler Moore Show cleverly confronted women's issues with subtly. For example, in Season 3, Mary invites her father to go out for dinner, but as the two leave her parents home her mother shouts, "Don't forget to take your pill!" to which both father and daughter reply, "I wont!" Without further explanation, the audience knows Mary's on the pill. 'Nuff said.

As The Atlantic notes, Time magazine dubbed the show a "disaster" when it first started, while the St. Petersburg Times labeled the unwed woman a "spinster." However, as Mary continued to rise in the ranks at WJM-TV's Six O'Clock News, attitudes began to shift, morphing her into a role model.

On the solemn occasion of Mary Tyler Moore's death on Wednesday, Jan. 25, comedians and co-stars alike continue to take to social media to share just what kind of idol Moore was. My Crazy Ex Girlfriend creator and star Rachel Bloom tweeted, "I could not do what I do without her." Dunham told The Hollywood Reporter, "Mary Tyler Moore's humor, style and vulnerability have had a profound influence on me as a television creator and on every woman I know working in television to upend expectations of traditional femininity."

With Moore's passing, it's inevitable that young girls and grown women will find a renewed sense of appreciation for the iconoclast actor. Although Moore was not a self-proclaimed feminist, according to The Atlantic, which reports even the likes of "Gloria Steinem and other women's rights advocates criticized Richards for not being vocal enough," Mary Richards was an undeniably a feminist icon. Perhaps marathoning one of the first programs where "female characters busted out of the acceptable standards for female behavior," according to The Washington Post, would be the most appropriate way to pay tribute to the fallen star.

More like this
Amanda Gorman Shared A Powerful Message On Meghan Markle’s Penultimate Podcast
By Darshita Goyal
Keke Palmer Just Announced She's “Going To Be A Mom” On SNL
By Brad Witter
The Kenan & Kel Reunion On SNL Took A Dramatic Turn, Thanks To Keke Palmer
By Brad Witter
Another 'Sex Education' Star Has Joined The 'Doctor Who' Franchise
By Darshita Goyal
Get Even More From Bustle — Sign Up For The Newsletter