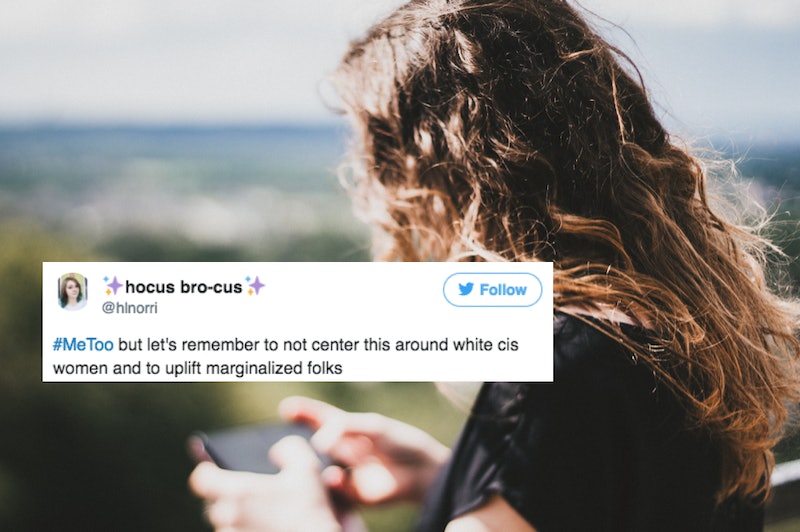 The “Me Too” hashtag has proven to already be extremely powerful since it began to trend on October 15 — Alyssa Milano's tweet popularizing the movement, originally started by activist Tarana Burke, has over 67,000 responses, and the "Me Too" hashtag, originally started by advocate Amy Siskind, doesn’t seem to be waning any time soon. Other social media platforms, including Facebook and Instagram, have also been flooded with “Me Too” posts from sexual assault survivors. Despite the positive aspects of the “Me Too” campaign, many fear its reach (and therefore impact) is too limited — it's not as inclusive as it could be, some say, but there are ways to change that.

Most grassroots activist movements have, historically, struggled to be inclusive of marginalized communities, and to be accessible to the least privileged members of a community. The suffragist movement centered white women who fought solely for their voting rights, at many points excluding Black women from the conversation. Second-wave feminists excluded transgender women from mainstream women’s rights movement. Even modern day social justice movements still fail, at times, to be truly intersectional, and center the voices of women of color, disabled women, and other oppressed groups. The “Me Too” campaign is no exception. While the campaign is bringing to light the very necessary conversation our society needs to have about sexual violence, the “Me Too” conversation is not accessible to every survivor. Those who are impoverished, who do not speak English, who have limited internet access, or who are in an unsafe living situation may not be able to access the “Me Too” campaign — even though some of those folks may be the ones who need to hear those two words the most.

Here are five simple ways to make the “Me Too” conversation more inclusive of and accessible to marginalized people.