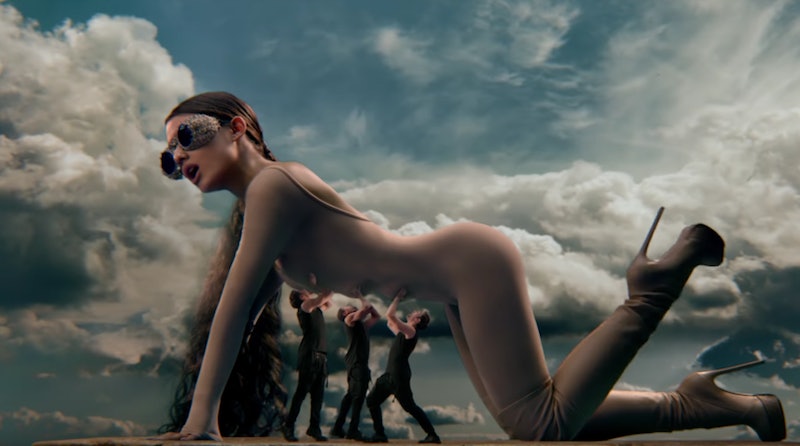 Typically, all the questions about a song's meaning get answered by the release of the music video, but every so often, someone like Ariana Grande comes along to keep fans guessing. If you're wondering what the "God Is A Woman" video means, you're not alone. The newly-released clip is packed with symbolism, unusual imagery, and unapologetic sexuality, all of which combines into one unique package encouraging female empowerment.

The video was released on Friday at noon, just 12 hours after Grande dropped the track. Leading up to the song's release, the singer's fiancé, Pete Davidson, revealed via his Instagram stories that "God Is a Woman" was his favorite track from Grande's upcoming album, Sweetener, due out Aug. 17. "GIAW at midnight," he told his fans on Thursday, adding, "this is one of my favorite songs on the album it's bonkers!!!" And "bonkers" does indeed seem to be the word for it, because the creativity in this video is off the charts.

As you might guess from the track's title, the underlying theme throughout the "God Is a Woman" video is the strength of womanhood, which Grande highlights in the video's first moments. As she gyrates in the middle of the Milky Way, it suggests that feminine energy is at the center of everything, a message that becomes a constant throughout the video.

In one image, Grande sits atop the globe, trailing her fingers through weather patterns, causing what appear to be hurricanes wherever she dips her fingers below the surface. In another, she brandishes what looks like an oversized gavel — a symbol of judgement — beneath two disembodied legs, high-heeled and spread wide, with rays of light emanating from their center.

From that position, she mouths a monologue performed by Madonna, as she recites a passage of pronoun-switched version of scripture from Ezekiel 25:17. (Which also happens to be the Bible verse that Samuel L. Jackson's character Jules Winnfield spouted in Pulp Fiction.) As the reigning Queen of Pop intoned:

And I will strike down upon thee with great vengeance and furious anger those who attempt to poison and destroy my sisters. And you will know my name is the Lord when I lay my vengeance upon you.

When the passage is completed, Grande winds up and flings the gavel over her head and upward. It soars through the air, crashing into the glass ceiling above, which shatters, showering a triumphant Grande in little shards of glass.

This glass ceiling moment symbolizes the progress made by women thus far, and that which still needs to be made in order to reach true equality. But other moments are slightly less transparent. The screaming groundhogs? Can't help you. Other imagery, such as Grande staring down a group of angry men hurling insults at her, or an illustration of the singer standing in nature, cradling a growing baby bump are slightly more self-explanatory.

In addition to the more global messages of power and progress, Grande has included glimpses of her own struggles in the video as well. Though she portrays herself as a god in the video, she's still affected by the actions of lesser mortals. In one moment, tiny men hurl abuse as the larger-than-life singer sits calmly by, her face unmoving as words and phrases like "little girl," "stupid," and "fake" bounce off of her. Even if she's not affected by them, the moment is a reminder that she's aware of the insults that are frequently leveled at her.

Later, Grande walks a tightrope in a schoolgirl uniform, a visual representation of the line she's had to walk between girlhood and adulthood as she comes of age in the public eye. But the balloons she carries are the planets, as if to remind herself and her fans to look at the big picture; that none of this really matters except how you feel about yourself.

And judging by the video, Grande feels pretty good about herself: She's owning her sexuality, clapping back at haters, and learning how to ask for what she wants. She's learning about who she is and exploring her own sensuality and creativity. And since she's putting the whole process on display in the "God Is a Woman" video, fans should count themselves lucky to be on the journey alongside her.