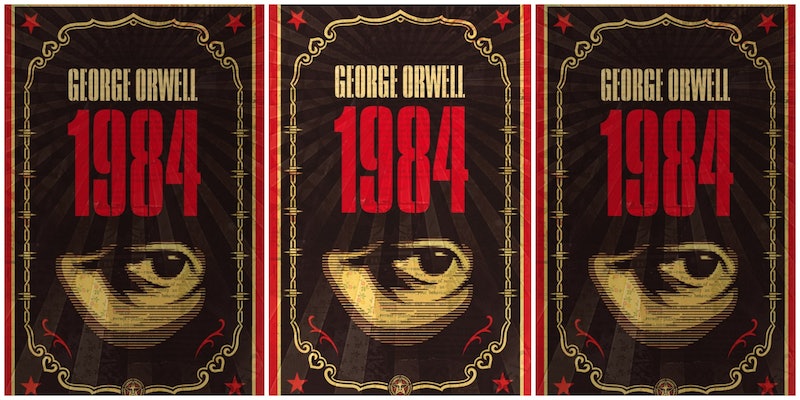 If you've ever taken a high school English class or watched the news, there's a good chance that you've heard the word "Orwellian" before. It's the most frequently used adjective derived from an author's name. Forget Dickensian orphans or Machiavellian plots, because "Orwellian" outstrips them all. And if you've read George Orwell's 1984, you might have an idea of the word's meaning.

The trouble is that we often ignore the word's full meaning.

I mean yes, on a basic level, "Orwellian" just means "in the style of Orwell." It can be fairly applied to anything that reminds you of the writing of English author George Orwell. If you saw a pig espousing a corrupted version of Marxist philosophy, you could easily call that Orwellian. If you wanted to be especially difficult, you could even argue that the feature film Babe is Orwellian, because George Orwell did write Animal Farm, which involves several talking pigs who upset the social order of their surroundings much like the titular Babe.

But people usually use the word "Orwellian" to refer to George Orwell's 1984. The book depicts a dystopian, totalitarian society, tightly controlled by constant government surveillance and Thought Police. "Orwellian" is often used as a synonym for the word "authoritarian." Anything that is perceived as limiting personal freedom becomes "Orwellian." And if you ignore the nuances of George Orwell's actual writing, the very word "Orwellian" becomes, well... a little bit Orwellian.

1984 doesn't just paint a picture of a tyrannical police state, after all. The fictional government of Oceania is far more sinister than that. They've discovered that controlling people through violence is all well and good, but controlling people's language is where the real power lies. I mean, you can only only hold so many people down with force. If you want to truly crush any hope of revolution, you must control people's thoughts and words and narratives. You must convince your citizens to "reject the evidence of your eyes and ears" in favor of party propaganda.

Orwell understood that political language was an accomplice to tyranny. Political language, as he put it, "is designed to make lies sound truthful and murder respectable, and to give an appearance of solidity to pure wind." At its most powerful, political language creates "doublethink," a state of cognitive dissonance that forces people to ignore reality in favor of the government's official narrative.

In 1984, labor camps become Joy Camps. The Ministry of Truth manufactures false history and fake news, propaganda filled with statistics and "facts." The Ministry of Peace is the military, which keeps the country in a constant state of war. The Ministry of Love tortures political prisoners. As the slogan goes, "War is Peace, Freedom is Slavery, Ignorance is Strength." Words in 1984 do not convey meaning, they destroy meaning entirely. How can you possibly yearn for freedom when the word "freedom" means slavery?

Orwell's government goes so far as to eliminate words from the English language to create the official language "Newspeak". They rewrite history in their favor. They control their own opposition, creating an entire rebellion just to suss out and re-program the thought-criminals. Even saying the wrong thing in your sleep can be labelled thoughtcrime.

So "Orwellian" doesn't just mean "authoritarian." It refers to the deceptive and manipulative use of language as well. You can have Orwellian rhetoric in a democratic society, too—hence why sales of 1984 jumped 9,500% after Kellyanne Conway claimed that a lie about the audience size at Donald Trump's inauguration was not a lie but an "alternative fact."

"Alternative fact," much like "peaceful war" or "free slavery," is an oxymoron. It's a phrase that undermines its own meaning. It's doublespeak. It is, in a word, Orwellian.

Calling genocide "ethnic cleansing" is Orwellian, and so is re-branding discrimination as "family values." "Enhanced interrogation techniques" as a euphemism for torture is straight out of the Ministry of Love. Calling a human being "illegal" smacks of the 1984 term "unperson" for anyone whose documentation has been erased from the system.

And using the word "Orwellian" to simply describe something you dislike is rather Orwellian in itself. The White House recently slammed the Chinese government for its "Orwellian nonsense," distancing their own language from Oceania's doublespeak. A brief visit to the depths of Reddit, and you're sure to find alt-right bros complaining about the "thought police" on the left. Both sides have taken up the battle cry of "fake news" and "Big Brother." Orwell's own language can be leveled against his ideals. Much like the Party in 1984 creating their own opposition, the "alternative" point of view is often just a cover for supporting the dominant power structure. Everyone wants to be seen as Winston, bravely subverting the Party's tyranny, even when their actions say otherwise.

So the next time you hear that something is "Orwellian," take a moment to think about whether the word is being used to point out authoritarian control of language... or to undermine its very own meaning. Take a moment to think for yourself. It's what George Orwell would want you to do.

More like this
5 Ways To Stand In Solidarity With Women In America From The UK
By Sophie McEvoy
How To Fight For Reproductive Rights, Based On How Much Time You Have
By Courtney Young
16 Novels That Paint A Realistic Portrait Of Abortion
By K.W. Colyard
Aesop's Queer Library Is Open
By Tomi Otekunrin
Get Even More From Bustle — Sign Up For The Newsletter