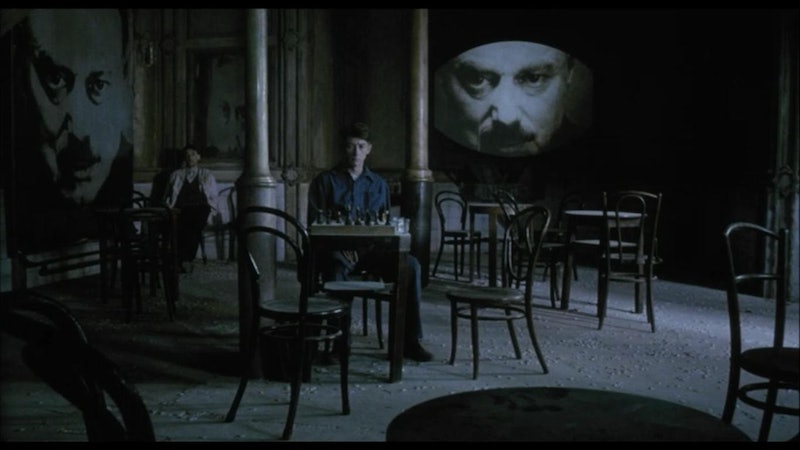 The year may be 2018, but, as many people have already noted, George Orwell’s 1984 somehow feels more relevant than ever. Like Margaret Atwood’s The Handmaid’s Tale, the dystopian classic has found new life in the Trump age, where it seems like doublespeak has become the official language of the White House. Last year, in the wake of Kellyanne Conway's "alternative facts" comment on Meet the Press and the rise of "fake news," both real and purported, book sales for 1984 surged. At one point, Orwell's novel was at the top of several Amazon bestseller lists. It appears that readers all across the country are turning to their bookshelves for guidance through this unprecedented era, and 1984 is quickly becoming a No. 1 resource.

Written in 1949, George Orwell’s dystopia is set in a world of complete government surveillance, intense propaganda, and constant and perpetual war. It follows Winston Smith, a resident of Oceania and a member the totalitarian superstate's Outer Party, or middle class. An employee of the Ministry of Truth, it is Winston's job to rewrite history by editing past newspaper articles to better reflect the Party's agenda.

Secretly disillusioned by the Party and its mysterious leader, Big Brother, Winston embarks on a journey towards rebellion. First, he engages in a sexual relationship with, and eventually falls for, a fellow Ministry coworker, Julia, who shares his dreams of freedom. Then, after O'Brien, a member of the Inner Party, reveals himself to be a fellow dissenter and gives Winston a book that promises liberation, he dedicates his time to thinking about liberation and rebellion.

Of course, O'Brien isn't really an ally to the resistance or a friend to Winston. When Winston and Julia are arrested by Thought Police for their dissent, he shows himself to be a loyal employee of the Ministry of Love, a branch of the government dedicated to punishing those who dare try and rebel against the Party. There, in Room 101, Winston is relentlessly tortured by his worst fear — rats — until he eventually forsakes his love for Julia and swears loyalty to Big Brother.

Orwell could have ended his novel there, with Winston begging his enemies from a torture chamber to hurt his love in order to save himself, and it would have been a devastating final act. Instead, the 1984 author went one step further by describing Winston's life after his release from the Ministry of Love. In his new reality, the one-time rebel sees Julia again, and they both admit to betraying one another while being tortured. Afterwards, he sits in a cafe happily listening to a victory celebration in the streets as he looks at a portrait of Big Brother:

“He gazed up at the enormous face. Forty years it had taken him to learn what kind of smile was hidden beneath the dark moustache. O cruel, needless misunderstanding! O stubborn, self-willed exile from the loving breast! Two gin-scented tears trickled down the sides of his nose. But it was all right, everything was all right, the struggle was finished. He had won the victory over himself."

And then, in one simple phrase, Orwell delivers one of the most heartbreaking lines in literature: "He loved Big Brother."

In the book’s final act, there are so many moments that fall somewhere between disappointing and utterly devastating — when Mr. Charrington, the shopkeeper who rented Winston and Julia their love shack, turned out to be a member of the Thought Police, or when Parsons own children reported him to the Party, or when Winston screams "Do it to Julia!" — but there is nothing more tragic in 1984 that its final, soul-crushing line. In those four words, Orwell snaps readers out of any delusions of resistance, change, or revolution and slams them back into a chilling and inescapable status quo.

The story of 1984 is a dystopian, after all, so the books decidedly Unhappy Ending doesn't come as much of a surprise. What does feel shocking, however, is the way Orwell sets readers up to believe, if only for a moment, there is any other possibility. Over roughly 300 pages, we watch Winston slowly start to believe in an alternative to his life in Oceania, one where he and Julia can live and love freely. We see them risk it all to be with one another: they write secret "I love you" notes, have forbidden sex, and even vow never to be separated from each other, even if it means leaving Oceania. When they are captured, Winston's love for Julia and his hate for Big Brother are the only things keeping him from giving into their torture techniques.

Through Winston and Julia's relationship, Orwell convinces readers that there is a chance, however slight and narrow, for some kind of victory in a dystopia. Perhaps the pair of lovers won't be able to overthrow Big Brother — it is a totalitarian regime with constant surveillance, after all — but there seems to be a possible outcome where Winston and Julia could escape its iron grasp, if only in death. Even in the darkest hour of his torture, it seems as impossible that Winston would give up his love for Julia to avoid torture as it does that he would give up his hate for Big Brother to do the same thing.

That is, until he does just that.

In the end, Orwell wants readers to know that even romantic love fails in Oceania, where there is no greater loyalty than the one to the Party, and no greater motivator than fear. Even those things Winston thought would save him — his love for Julia and his hate for Big Brother — could be turned against him and completely flipped on its head. The exact thing that was meant to protect him, love, became the very tool for his undoing.

From its first page to its very last line, 1984 was hurtling the narrative towards the inevitable, heartbreaking conclusion:

When the rats come chomping, we are all capable of loving Big Brother.