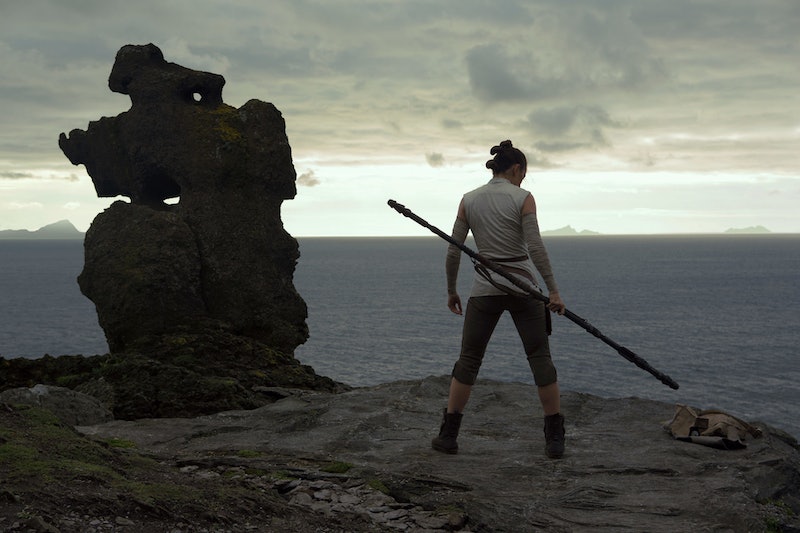 Spoilers ahead for Star Wars: The Last Jedi. In Star Wars, the smallest detail can mean nothing, or it can mean everything, especially when it comes to hinting at what comes next. And the meaning of The Last Jedi ending is no different. The Last Jedi ended with Kylo Ren committing to the Dark Side and becoming the new Supreme Leader of the First Order, Rey swooping in to save what's left of the Resistance, and Luke becoming one with the Force (aka dying). The most crucial part of the ending, however, has nothing to do with our new cast of main characters. Instead, it's about a boy working on Canto Bight who uses the Force to summon a broom and dreams of the Resistance.

In the final scene of The Last Jedi, the boy, clearly a salve or indentured servant, is talking about the legend of Luke Skywalker's bravery with his fellow child slaves in the fathier stables, where he had just had a brief interaction with Resistance heroes Rose and Finn. A grumpy alien comes in and orders everyone back to work, so the boy leaves the room, summons a broom into his hands, and goes outside. He looks up to the sky, sees a ship flying overhead, and plays with the Resistance ring Rose gave him. Whether or not the boy, named Temiri Blagg in The Last Jedi Visual Dictionary, becomes a significant character later on is irrelevant. The scene, for now, isn't about the boy, it's about the spirit of the Resistance. In other words, it's about hope.

"Luke has now given this spark of hope back to the galaxy," says director Rian Johnson, speaking to Bustle's Kelsea Stahler over the phone recently. "This legend of Luke Skywalker is now going to spread anew and inspire the next generation... what Luke did at the end was about more than saving a group of 20 people in a cave. The real purpose of it is seeing that final scene — that was more kind of the emotional payoff for me, the notion that finally, the galaxy is ready. The seeds of resistance are going beyond a little group of soldiers, and to the rest of the galaxy now, thanks to Luke Skywalker."

As Johnson says, the ending of The Last Jedi is all about hope for the future of the Resistance. When Kylo Ren corners the Resistance on Crait, there are only a few dozen of committed fighters left. And though there may be others sympathetic to the Resistance sprinkled throughout the galaxy, none of these potential allies were willing to come to Crait to save General Leia, even with the use of her personal code. Even though the Resistance survives, their numbers are so low it seems almost impossible to imagine that they would ever defeat the First Order. And then, thanks to the little boy, we see that the Resistance will continue to grow, until one day, they can take back the galaxy.

As the ending shows, Luke's dying act was not only to save Poe, Finn, Rose, Leia, and the other Resistance members, but also to inspire a new generation of the Resistance. This could also be read as an acknowledgement of what Luke Skywalker has meant to fans since his debut in A New Hope. As the original Star Wars protagonist, Luke inspired countless fans over the years, just as his last stand has inspired they little boy in the film.

As Star Wars continues to expand beyond the original trilogy, it's only natural that the franchise heroes also change. Though it might be hard for some fanboys to admit, moving beyond Skywalker heroes isn't just what is going to save the Resistance, it's what is going to save Star Wars. It's time for new stories, new heroes, and new corners of the galaxy to be discovered. And as long as the Force lives beyond the Skywalkers, there will be more stories to tell.