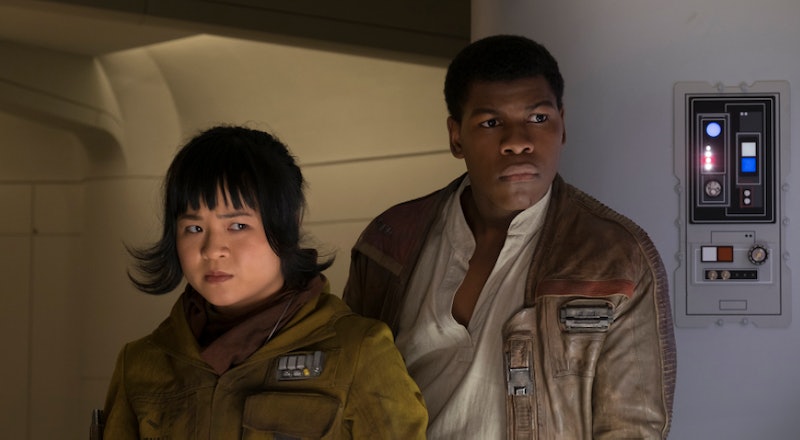 There are a couple of reasons why the movie is getting so much hate. The biggest among the Star Wars faithful seems to be the impression that director Rian Johnson doesn't care much for them and their theories. After The Force Awakens, two of the biggest mysteries introduced to the Star Wars universe by director J.J. Abrams were: 1) Who is Snoke? 2) Who are Rey's parents? Fans bandied about loads of theories regarding these two questions and looked forward to getting more clues ore answers in The Last Jedi, only to have both of them undercut in the new film.

Who is Snoke? Doesn't matter, he's dead now and you'll never know how this uber powerful Force user came out of nowhere after Return of the Jedi and essentially managed to build a new Galactic Empire. Who are Rey's parents? They're nobody, it also doesn't matter, and you've wasted two years of your life trying to figure out their identities for nothing. Proponents of The Last Jedi will argue that these subverted storylines make the movie fresh, but critics insist that it's just subversion for the sake of subversion and that it amounts to kicking sand in the eyes of the fans who financially support the franchise.

Another reason why some fans are backlashing against the film is the plot itself. There is a large faction of people who would be willing to forgive the brushing aside of fan theories if they were given a good movie, but feel they were shortchanged there as well. Much of their vitriol is aimed at the subplot of Finn and new character Rose Tico, who take up a lot of time in the middle of the film on a meandering mission to the casino city of Canto Bight in search of a hacker, get arrested for a parking ticket, escape on alien horseback, enlist a random hacker they just met to help them instead of the man they went looking for, and sneak onto Snoke's ship, only to have their mission fail when the stranger whose help they've enlisted backstabs them.

The subplot proved pointless to the overall plot, fans argue, and it took up a lot of time in what is the longest Star Wars movie ever made. Proponents will argue that the subplot was necessary for Finn's character development to show he's now a hero, but detractors will say that was already established at the end of The Force Awakens when he engages Kylo Ren in a lightsaber battle, rendering the lengthy subplot completely pointless.

Another sticking point among fans is the way the film treats Luke Skywalker. In many ways, Luke is Star Wars, so it makes sense that any alteration to his character would be controversial. So when the purest Jedi in the galaxy becomes a hermit who thinks the Jedi are B.S. and who attempted to kill his young nephew, well, fans aren't going to like that very much. And then there's the death of Luke, which a lot of fans think was unnecessary... though some of this criticism may have been aided by the real life death of Carrie Fisher, since it now appears that none of the original "big three" of Luke, Leia, and Han Solo will be in Episode IX.

Finally, because this is Star Wars, some fans can't help but compare the movie unfavorably to the Original Trilogy. They'll say that it's too jokey, that the Porgs are too cute and distracting, that the movie takes too many liberties with the Force, that the core trio of heroes — Rey, Finn, and Poe — don't spend any time together, etc. These types of criticisms aren't unique to The Last Jedi, though, they simply come with the territory of modern Star Wars movies.

It remains to be seen if the backlash to The Last Jedi will last, or if it's simply a small but particularly loud group of fans who are voicing their opinions and will eventually be drowned out. Regardless of the criticism, The Last Jedi is already a mega-hit, and in just two short years, fans can do this all over again when Star Wars: Episode IX hits theaters.