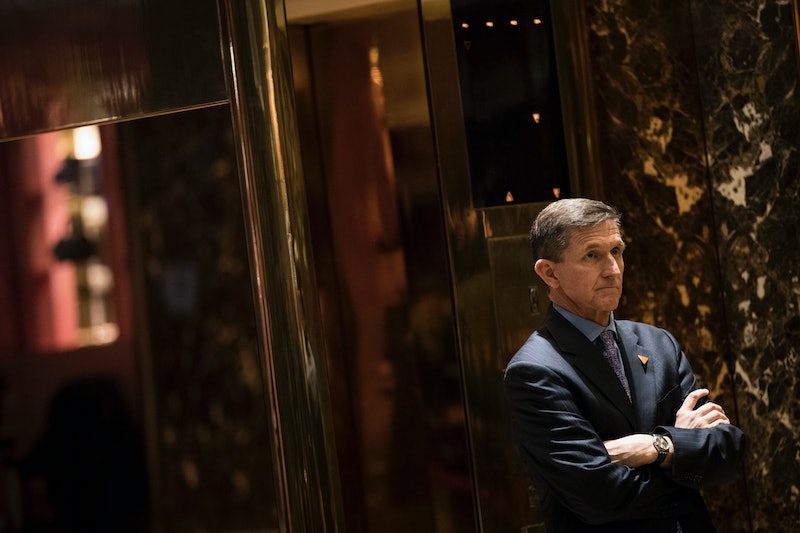 When the news broke Monday evening that Donald Trump’s national security advisor, Michael Flynn, resigned, it rocked Washington, D.C. But for those of us who don’t live and breathe inside the beltway, it can all sound a bit convoluted — what exactly happened? Why did Flynn have to resign? And what are the implications for the Trump Administration? Our timeline here sums up the major events that led up to Flynn’s ouster.

Before we get into the issues of the last few months and understand how Flynn fit into the Trump administration, however, it’s important to put Flynn into context within the Trump campaign. Flynn, who had served in the Army for most of his life, was a registered Democrat up until 2015, and served under Barack Obama as the director of the Defense Intelligence Agency. In that capacity, he warned that the administration was not taking seriously the threat of jihadist militants.

He retired in 2014 from the DIA and quickly became an outspoken critic of the Obama administration’s policies towards terrorism. In the early days of the 2016 Republican primary, he consulted with several of the candidates, and was eventually brought on board the Trump campaign as Trump’s national security advisor. After Trump won the nomination, Flynn’s name was on the shortlist of potential running mates, before Trump went with then-governor of Indiana, Mike Pence. Once Trump won in November, Flynn was chosen to be Trump’s National Security Advisor.

Flynn exchanges messages with Russian Ambassador Sergey I. Kislyak — possibly including a Christmas text message on Dec. 28, according to the BBC. They also exchange phone calls on Dec. 29, the same day the Obama administration expelled 35 Russian diplomats in retaliation for Russia’s hacking the U.S. Election.

The Washington Post first reported on the Dec. 29 call. The next day, Sean Spicer said that the calls were purely to discuss logistics for future meetings.

Vice President Mike Pence goes on Face the Nation to defend Flynn’s call with Kislyak. When asked if anyone in Trump’s camp had inappropriate contact with foreign officials, Pence said “Of course not.”

Former acting Attorney General Sally Yates — who would later be fired for refusing to defend Trump’s executive order targeting seven Muslim-majority countries — informs the White House that Flynn’s misleading statements to people within the administration (including Pence) made him liable for blackmail by the Russians.

The Washington Post reported on Flynn’s contact with Kislyak and that the two discussed sanctions, even though in an interview just the day before, Flynn denied it.

Aboard Air Force One, Trump claims to have no clue about the report, even though Sean Spicer would later confirm Trump had known about the issue for weeks.

As late as 4:15 pm on Monday, Trump's senior adviser, Kellyanne Conway, reported that Flynn had the full confidence of Trump. At a press briefing shortly thereafter, Spicer said Trump was “evaluating the situation” with Flynn.

Flynn tendered his resignation Monday evening. “Unfortunately, because of the fast pace of events, I inadvertently briefed the vice president-elect and others with incomplete information regarding my phone calls with the Russian ambassador,” Flynn wrote in his letter of resignation. Keith Kellogg has taken over as acting National Security Advisor while Trump seeks a replacement.

In the day following Flynn’s resignation, questions about who knew what and when have swirled around Washington D.C. Critics from the right are claiming that Flynn’s ouster was a media witch hunt, and Trump tweeted early Wednesday morning attacking the media.

The real question is whether Flynn’s departure has ended the controversy, or if the problems go deeper. Stay tuned.