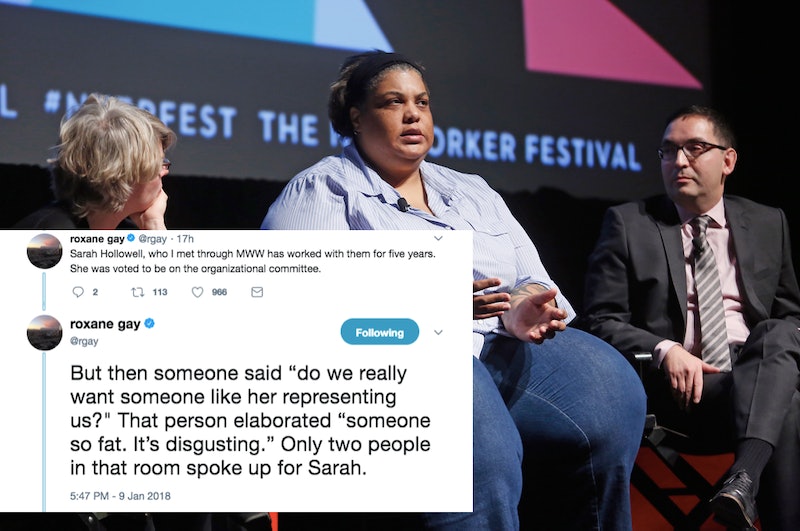 Even in the book world, where female characters can be whoever or whatever they like, women authors still struggle with the issues that face their gender across industries — namely, sexism, gender bias, and weight discrimination, among others. That fact was made crystal clear this week when Roxane Gay called out the Midwest Writers Workshop for fatphobia in a series of tweets. According to the Bad Feminist author, the organization's Board of Directors decided not to bring author Sarah Hollowell onto their organizational committee because of her weight. In a statement about the controversy, the Director of Midwest Writers Workshop acknowledged that they "screwed up," and offered an official apology to Hollowell as well as the organization's friends, faculty, and alumni.

Sarah Hollowell is an activist and self-identified "fat writer" who has worked with the Midwest Writers Workshop (MWW) —a literary organization that trains and nurtures aspiring writers through programs like master classes, writing workshops, and marketing and social media consultations — for five years. She began working at the organization in 2013 as an agent assistant intern, and over the years, worked her way up the ladder and had become the supervisor to the intern. This year, according to Gay's tweets about the controversy, the board voted Hollowell on to the organizational committee, but the fatphobic attitude of one board member unfairly prevented her from securing the role.

According to Gay's thread on Twitter, an unnamed board member spoke out against the decision to bring Hollowell on. By the author's account, "someone said 'do we really want someone like her representing us?'" That person allegedly made other derogatory comments about Hollowell's weight, and according to Gay, only a few members spoke out on Hollowell's behalf. Gay alleges that Hollowell was not invited to the board "because of her body."

Gay's lengthy Twitter thread went on to express unwavering support for Hollowell, as well as a sharp criticism of fatphobia and MWW, an organization which Gay is an alumni of. Hollowell shared Gay's thread online, and commented in her own Twitter thread about the "fear and guilt and confusion and pain" she experienced as a result.

"When Roxane started tweeting, I felt anxious and scared but also experienced this lightness," Sarah Hollowell tells Bustle in an interview about the controversy. "I was hurt and in pain, and I contacted Roxane because I trust her to tell me when I'm overreacting or need to step back. Knowing she was as angry as I was validating. Her tweets were validating."

In the official response to the controversy that was sent to Bustle and posted to the Midwest Writers Workshop Facebook page today, MWW Director Jama Kehoe Bigger acknowledged the organization's wrongdoings, and offered an apology to Hollowell. It reads, in part:

"Sarah Hollowell has been a close friend of our conference for years. She is an alumnus who has assisted our agents and faculty, mentored our college interns, and advocated the benefits of attending our annual workshop time and again. She is also an accomplished writer whose fiction, poetry, and essays exploring weight and femininity have been published in multiple online publications and literary journals. My appreciation and love for Sarah is why it pains me to acknowledge that this organization has hurt her."

The statement went on to explain the details of the meeting in which the derogatory comments about Holloway were made. According to Bigger, a committee member made an insensitive comment about Hollowell that she "knew was flawed, but did not believe was an accurate representation of her true feelings about Sarah or this committee member’s longstanding commitment to inclusivity and diversity at our workshop." The committee member apologized before the group cast a unanimous informal vote to invite Hollowell to join the board.

Bigger says that the board never formally invited Sarah Hollowell to join the board because they postponed all invitations to new members.

Bigger only addressed the negative comments that sparked the controversy with members of the committee and Hollowell herself after it was made public. "I cannot change the judgment call I made that afternoon," Bigger's statement reads. "All I can do now is acknowledge that I am doing everything I can to make things right."

According to Bigger, the board member who first made the fatphobic comments about Hollowell has since been fired from the MWW executive committee, and the director also plans to meet with the board to review her own standing following the controversy. Her statement goes on to say that MWW reached out with an official apology to Hollowell, along with an invitation to help the organization "define what 'making this right' looks like to her."

When asked about MWW's apology, Hollowell tells Bustle that she spoke with committee members and saw their public statement on the matter. "Right now, I don't know what I want to say in response," Hollowell says. "It's a lot of emotions to sort through. I appreciate that they're taking steps to make it better."

While Hollowell has no plans to work with MWW in the future, she does believe in their ability to learn from this disheartening experience. "I expect and hope they'll truly learn from this," she says. "I want them to know that comments like that aren't acceptable even in private committee meetings, about anyone, whether or not they've worked with them as long as I have. I hope they make some real changes in how they look at who deserves a public spot with them. I hope they grow."

For their part, Midwest Writers Workshop is doing their best to clear the air and move forward as a welcoming and inclusive organization. Despite their efforts, however, the writing community and Twitter users alike aren't done expressing their disappointment in an organization and their utter mishandling of the situation. Several people online also pointed out to the fact that MWW only responded to the problem after it was made public. "We've made mistakes," MWW tried to explain to critics on Twitter. "We're We're reevaluating the structure of our volunteer committee. Sarah has handled this with grace. Thank you for supporting her."

For Hollowell, the fallout from the situation is painful and complicated. "I put so much into MWW that it's hard to be happy to see them be hurt," Hallowell tells Bustle. "I keep having to remind myself that my hurt matters, too, and so in a way I'm happy to have it out there."