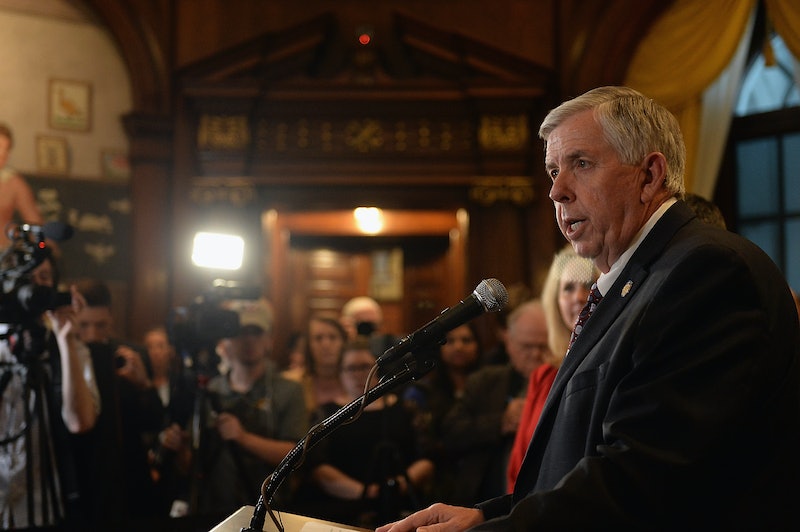 As a series of anti-abortion bills pass state legislatures across the country, Missouri's eight-week abortion ban has been signed into law, making it the latest state to implement extreme abortion restrictions. According to the Associated Press, Missouri Gov. Mike Parson signed a bill on Friday that bans abortion following the eighth week of pregnancy. Similar in some respects to the stricter anti-abortion law that Alabama passed earlier this month, Missouri's ban contains no exceptions for rape or incest.

Missouri's abortion ban is slated to go into effect in August, Vox reported, though the state is likely to be hit with lawsuits well before then. Unlike other anti-abortion bills that have passed in recent months, Missouri's bill does not include the "fetal heartbeat" language that many other states have. An initial version of the bill did allude to a "fetal heartbeat," but this phrase was removed in the final version of the bill that Parson signed, per Vox.

Once the ban goes in to effect, according to CBS News, doctors who perform abortions after the eight-week cutoff mark could face five to 15 years in prison. Prior to the passage of this ban, Missouri already had one of the most restrictive abortion policies in the country, CBS News reported, and only had one clinic in the entire state that still performed the procedure.

Although Parson has signed Missouri's abortion ban into law, the ban has not yet gone into effect, and pregnant people seeking an abortion in the state still have options. In an emailed statement, Dr. Colleen McNicholas, an OB-GYN in Missouri and a fellow with Physicians for Reproductive Health, said that this latest abortion ban is part of "an effort to intentionally instill confusion and panic in the communities I provide health care for across the state."

"Let me be clear: you can still get an abortion in the state of Missouri," McNicholas wrote. "Clinics are still open, for now. ... Politicians must stop inserting themselves in the patient-provider relationship and allow patients a barrier-free path to make medical decisions about their bodies. I trust my patients to make these decisions for themselves, and Missouri’s leadership should, too."

According to The Washington Post, Republican lawmakers in Alabama and other states that have recently passed abortion bans ultimately want to take down Roe v. Wade. Missouri lawmakers, however, wanted to come up with a law that would restrict abortion across the state no matter what happens to Roe, Vox reported. Missouri's GOP wants its law to withstand any forthcoming legal challenges, and in order to achieve that, lawmakers incorporated less restrictive time limits at 14, 18 or 20 weeks in the event that the eight-week ban is struck down in court.