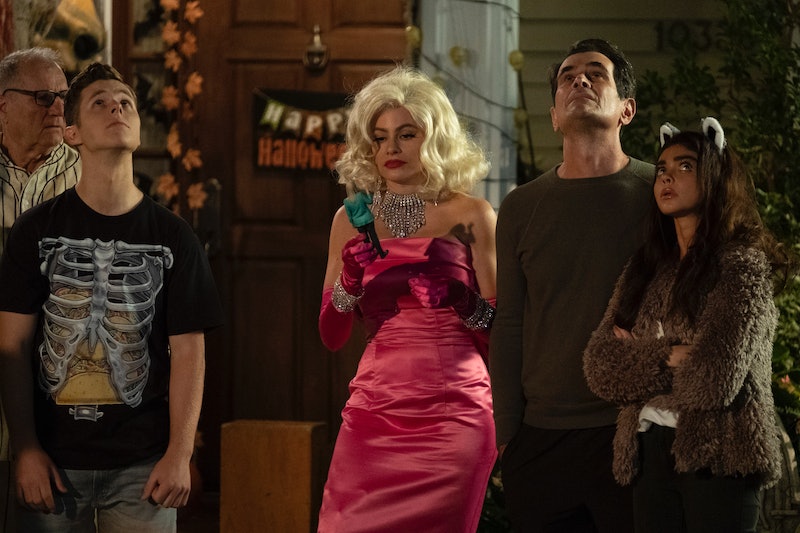 After teasing a significant death in Season 10, Modern Family said farewell to Claire and Mitchell's mom, DeDe. And while the family will continue to grieve as the season progresses, it seems Modern Family has something even bigger ahead for what could potentially be the show's final season. No decision has been made about Season 11 just yet, but at the moment, it feels like ABC's long-running sitcom isn't holding anything back. And according to Sarah Hyland, at least one of the upcoming stories will include a major moment for Haley.

Recently, Jesse Tyler Ferguson and Hyland shared a few teases about what's next for the extended Pritchett family with The Hollywood Reporter. Among those hints was a promise that something "bigger thing than the death" is coming. Ferguson told THR, "There's a major thing happening this season. It's beyond... I think you'll be surprised." Hyland added, "It was a shock, that's for sure."

These vague proclamations could mean almost anything — a marriage, a baby, a divorce, a big move — almost any life change would shake up the series, especially given how hard it has worked to keep the now adult children of the lead characters close to home. Hyland's Haley, in particular, could use some forward momentum, and it definitely sounds like something is up with the character. The actor told THR, "there's a lot happening with Haley, but I can't say."

One thing fans believe could be happening after the most recent episode is a surprise pregnancy for Haley. In terms of shaking things up, having the character deal with such a major life change could have a ripple effect throughout her family.

In the wake of finding out about her grandmother's passing, Haley was shown grief eating throughout the most recent episode. At least, it seemed like grief eating, but fans on Twitter think it could mean that she's expecting. Adding fuel to the rumor is the fact that Claire revealed to Mitchell that the last conversation she had with her mom was an argument over DeDe posting terrible birth control advice on Facebook — somewhere the social media obsessed Haley no doubt visits often.

Of course, a baby isn't the only thing that could shake up Haley's storyline. She's newly reunited with Dylan, which could lead to a wedding, or, better yet, she could land an awesome new job leading her to make some major changes in her life. When THR asked Hyland what she wants for Haley before the series ends, she said she wants her character to become more responsible, adding, "I think it's about five years past her time."

Just because there's a major story ahead for Haley, that doesn't mean her story is the one Ferguson was referring to when he said he thinks fans will be surprised. With a cast as sprawling as Modern Family's, every character is a candidate for a fresh start or unexpected life event. As DeDe's passing illustrated, Modern Family is still capable of surprising viewers, and it doesn't sound like Season 10 is done shocking fans just yet.