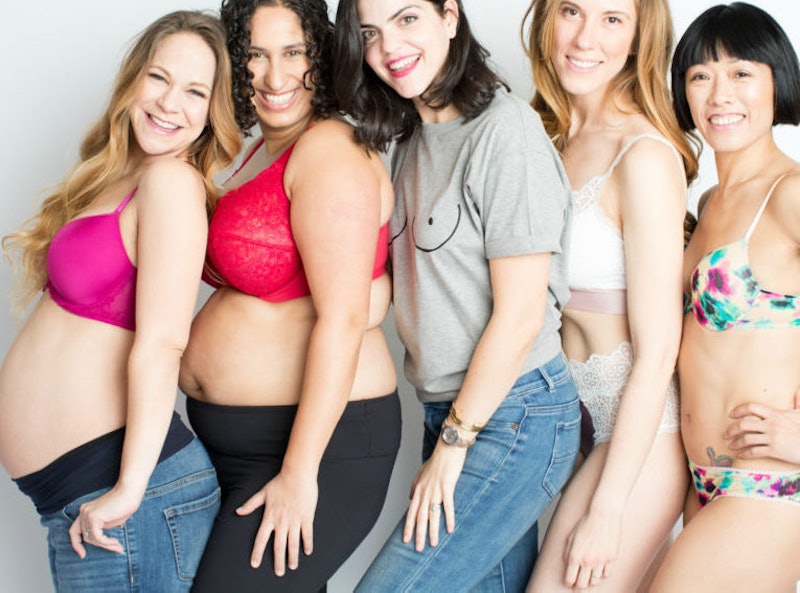 If you've ever felt a bit self-conscious choosing a bra because you were worried what the band and cup sizes would be, bra expert Kimmay Caldwell is here to help. Caldwell's More Than My Numbers campaign is a series of body positive and educational videos of women sharing their bra sizes — no shame, judgment, or negative self-talk included. The goal of the campaign is to show women that sizes don't define them — no matter how big, small, or anywhere in between.

Caldwell has worked everywhere from small boutiques in SoHo, to Bergdorf Goodman at the La Perla lingerie boutique. While working in changing rooms, she realized just how harmful women turn when looking at their reflections. "In my own journey, being a bra fitter helped me realize how mean I was being to my body, and just how mean pretty much every woman that came into the fitting room was being to her body, too. The things that they'd say in the mirror were unkind, and unhelpful," Caldwell tells Bustle.

Most of the time, the negative self-talk was about the numbers — the numbers of their bra band sizes, that is. This sparked an idea for Caldwell, to have an honest conversation about those numbers.

"​I started the 'More Than My Numbers' campaign because I saw over and over again how women let the number on their bra define them. The fear of what that number and letter would 'mean' about her often stopped a woman from taking her measurements or going in for a bra fitting. That often leads to guessing her bra size, which then leads to pain and discomfort, and ultimately a lot of shame and confusion," Caldwell explains.

She believes that wearing a bra that fits and feels great can help a woman stand tall and have the confidence to accomplish great things. But more importantly, it will also help her understand that her digits are information, not a definition. So how does Caldwell plan to accomplish all of that? By sharing other women's stories.

"For this project, we're starting with women and bra sizes, but it goes so much deeper than that," Caldwell explains. "In fact, in addition to sharing their bra measurements and bra sizes, the women discuss their journey with other numbers like weight, age, number of marriages, and even blood test results! One of the biggest 'hurrays' of not being defined by your numbers is freedom. Freedom to be yourself, to love and respect your body, to break free from the chains of a number defining who you are."

The way she'll do that is to invite a group of women to list their numbers without telling people what they are. This shows that just a bunch of random digits, without context, mean nothing. They don't show the whole picture, and don't really define the person in any way. As Caldwell points out, "Numbers are information, not a definition."

"​We live in a social society, and as bold and independent as we like to think we are, we are often influenced by those around us. In our current society, most people keep their numbers to themselves, or only share with those who they can trust with a secret. Keeping your numbers hidden gives them a great deal of mystery and power. But saying them out loud releases such a dangerous hold," Caldwell explains. "In addition, when one person lovingly shares their numbers, it gives others the permission to do so as well."

In addition to the inspiring videos, the 'More Than My Numbers' project is making educational guides, like a bra size starting point guide, bra fit tips, all in the forms of articles, guides, and videos.

Another very exciting point about this campaign is that it embraces everyone — of all sizes, genders, and backgrounds. There is no editing or airbrushing in the videos, and Caldwell hired an all female production team, which supports women in breaking out more in a typically male dominated industries.

If you'd like to support the campaign and help Caldwell get her message out, the project has an Indiegogo you can donate to. Watch the videos and allow yourself to finally shake off the hold your numbers might have over you — after all, they're just numbers, right?

Images: Laura Boyd of Own Your Sexy/ More Than My Numbers(2)