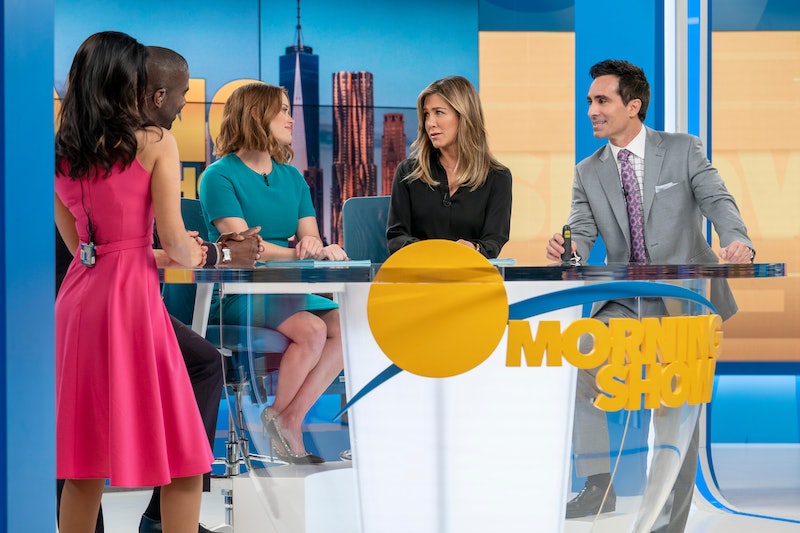 Spoilers ahead for Episode 7 of The Morning Show Season 1. Midway through the Nov. 29 episode, "Open Waters," The Morning Show's hosts are forced to gather in the studio for a new cast photo. They're all there begrudgingly, but nevertheless, each put on a brave face for the cameras. "Happy family!" the photographer urges as he snaps their picture. It's a brief moment, but one that encapsulates the core issue at UBA: positioning their work team as a "happy family" has actually had the adverse effect, leading to a professionally murky and provably toxic environment.

It's been clear from the beginning that the concept of family is baked into every aspect of The Morning Show. Their team operates on a schedule opposite to everyone else in the country, and they have to pretend to be best friends on TV, creating a feigned sense of intimacy that extends through to their audience, who welcome them into their living rooms each morning. "We're going to help America get through it like a family," Cory Ellison (Billy Crudup) tells reporters in Episode 2, after the Mitch scandal breaks.

And yet, UBA's longtime employees don't seem to notice, or else have become numb to it. It's only when Bradley "loose cannon" Jackson (Reese Witherspoon) arrives and starts asking questions that they begin to wake from their apathy.

This problem is not unique to The Morning Show. A quick Google search returns numerous articles about how a "family" dynamic can set an inhibiting and even dangerous precedent at work. "Work can definitely be a place where you have warm, supportive relationships with your co-workers...but they're not families," career advice columnist and Ask a Manager author Alison Green told the New York Times in 2018. "That might sound like semantics, but, 'We're like a family here' tends to be used in ways that really disadvantage workers."

According to Green, this can instead serve as code for employees to put the company above themselves, because isn't that what families do? "It often means that boundaries get violated and people are expected to show inappropriate amounts of commitment and loyalty, even when it’s not in their self-interest," she continued. "Or it means, 'We expect you to be loyal to us even though we won't necessarily return that loyalty when the chips are down.' Or, 'We're going to lean on you to work long hours, accept lower pay and not complain about bad management because, hey, 'We're family,' and asking for a raise or flex time will mean you're not a team player."

This is certainly true for Alex, who's been anchoring at TMS for over a decade. As thanks, she's being phased out in favor of someone younger. It's also true for Daniel, who's been visibly frustrated by the way UBA sidelines its employees of color, and yet is still hesitant to accept when Audra offers him a position at her rival morning show that could further his career. He doesn't want to leave his co-workers in the lurch.

Perhaps most notably, though, this "family" narrative is what has allowed Mitch's predatory behavior to go unchecked for so long. It's no secret that most staffers knew what he was doing, and yet they continued to stay silent, at best brushing it aside and at worst outright enabling him. Mitch was one of them. What could they do?

"You're not supposed to 'quit' a family," tech company employee Nicole Miller wrote for Fast Company in March. "Family members don't 'fire' one another."

This is why Mitch was so taken aback when Alex turned on him after the scandal; he expected her to love him unconditionally. Their relationship had become so blurred (and crossed the professional line on more than one occasion), that they'd both forgotten they were colleagues, and not truly America's mom and dad. Families may be inherently dysfunctional, but workplaces shouldn't be.

More like this
Wait, What’s Going On With Ben In That Umbrella Academy Season 3 Post-Credits Scene?
By Gretchen Smail
Julie Andrews Revealed A Surprising Behind-The-Scenes 'Bridgerton' Detail
By Grace Wehniainen
Everything You Need To Remember Before Westworld Season 4
By Brad Witter
Why Simone Ashley Had To Study Snails For Intimacy Training, Pre-‘Bridgerton’
By Grace Wehniainen
Get Even More From Bustle — Sign Up For The Newsletter