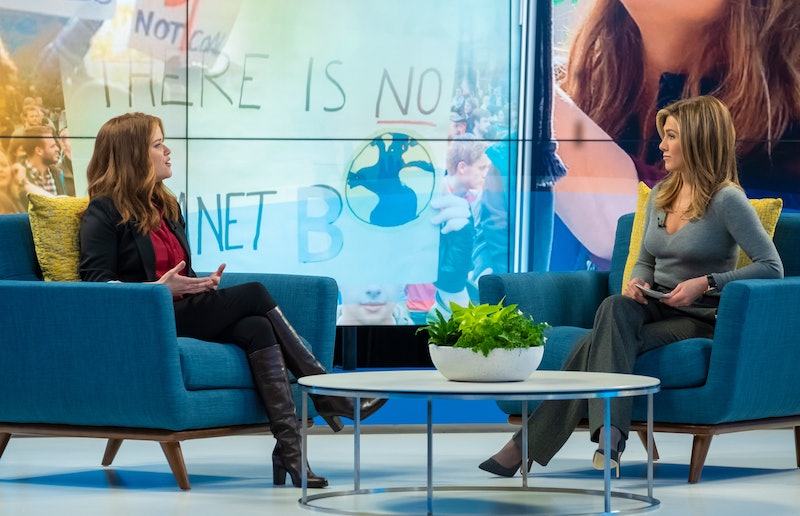 Spoilers ahead for Episode 6 of The Morning Show Season 1. Though there are many portrayals of women's workplace relationships in pop culture, they're often limited to one of two categories: either the women are best friends, or they're professional rivals. Rom-coms, in particular, perpetuate this trope. Compare Jenna Rink (Jennifer Garner) and Lucy Wyman (Judy Greer) in 13 Going on 30 to Andie (Kate Hudson) and Michelle (Kathryn Hahn) in How to Lose a Guy in 10 Days. It's two completely opposite ends of the spectrum: hard-wired frenemies, or inseparable BFFs.

The Morning Show, however, doesn't fall into either antiquated trope, instead portraying a more complicated, continuously evolving dynamic between Bradley Jackson (Reese Witherspoon) and Alex Levy (Jennifer Aniston), who suddenly find themselves as ill-matched co-anchors. Bradley is fiery and off-the-cuff; Alex is by the book and poised (at least when the cameras are rolling). The moment they meet, they are both impressed and acutely irritated by one another.

Because, historically, there have been so few professional spaces for women, there is inherent competition in male-dominated industries like broadcast news. It would be disingenuous to pretend that tension doesn't exist between Alex and Bradley. Alex, in particular, is at an especially fraught place in her career: after spending 15 years proving her mettle, the network is trying to force her out, and in comes a (less experienced) loose cannon from West Virginia who threatens to unravel all of her hard work. It's not entirely surprising that she isn't welcoming Bradley with open arms.

Bradley, meanwhile, is only there because Alex spontaneously announced her as her co-host, and she's been struggling to adjust to a corporate environment. It's clear she isn't as content as Alex to sweep Mitch's behavior (or those who enabled it) under the rug, even if that means pissing off the network heads. And while the other women working on the show have been friendly, Alex has been nothing but cold to her.

Still, Bradley is able to be the bigger person when, in the Nov. 22 episode, Alex vulnerably reveals how terrified she is that her daughter will blame her for her and her husband's impending divorce. Bradley offers some words of comfort, and the two women share a genuine moment that seems to help them better understand one another. It's unlikely that will last — one fleeting hug does not a friendship make — but that's the point. It's important that we see their relationship ebb and flow. After all, it's a fact of life that you're not always going to like your co-workers — especially not just because you're both women. But you can still find a way to respect one another and work together without being outright hostile. Chip and Cory, whose relationship is cordial but occasionally combative, don't have to face the same expectations.

Perhaps the best comparison to Alex and Bradley are Peggy and Joan from Mad Men, who begin the AMC series at odds before — at long last — coming to both a professional and personal understanding. Their rivalry and eventual friendship were continuously in flux, making for a richer, more nuanced, and more realistic story.

Similarly, while the two Morning Show protagonists are in the same professional situation, they are neither friends nor outright enemies. Midway through the episode, Alex states that they don't like each other — difficult, since their job requires them to be congenial on-air. "Doing this job well requires us to act like best friends for exactly two hours a day," Alex tells Bradley. "The rest of the time, we just have to be professional adults who can tolerate being in the same room."