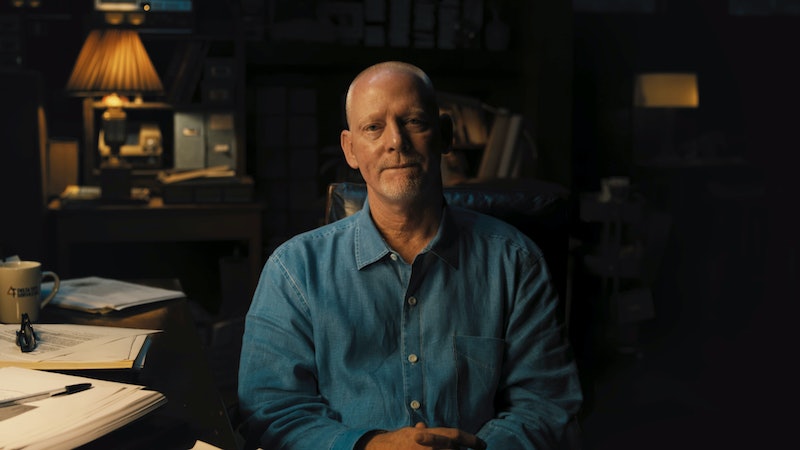 When Gary L. Stewart's biological mother contacted him out of the blue in 2002, he never expected it would send him down a decade-long rabbit hole that would ultimately convince him his father was the Zodiac Killer. He'd been happily living in Louisiana with his adoptive parents, but found himself wanting answers about his past. His search led him to Earl Van Best Jr., a convict with a mile-long rap sheet who his mother seemed determined to forget.

FX's new docuseries, The Most Dangerous Animal of All, chronicles Stewart's journey via his 2014 memoir of the same name. Stewart hadn't heard of the Zodiac Killer when he began his search for his father. Instead, the author tells Bustle, his initial goal was simply to "hear his side of the story" and find out why he'd abandoned him. But Van Best died in 1984, and Stewart says he knows "the closure [of speaking to him] will never come."

Nonetheless, he continued his research, eventually uncovering a number of disturbing coincidences that led him to believe Van Best was the Zodiac Killer: an unhappy childhood, a criminal record, a love of ciphers, a thumb scar, similar handwriting, and an uncanny likeness to a police sketch. (San Francisco police spokesman Albie Esparza told CNN in 2014 that they could not comment on the veracity of Stewart's claims, as it was still an open and active case.)

Though a number of suspects have emerged over the years, the case of the Zodiac Killer has gone unsolved for decades. The killer terrorized Northern California in the late 1960s, taunting the police and sending cryptograms to local San Francisco and Vallejo newspapers. In a letter, the Zodiac Killer claimed he killed 37 people; only seven have been confirmed. All of this has only magnified public fascination with the case. The Zodiac Killer Reddit page has over 28,000 members, and the killings were the focus of a popular 2007 movie, Zodiac, starring Mark Ruffalo, Jake Gyllenhaal, and Robert Downey Jr.

For Stewart, though, the fascination is different. The suggestion that his father, a man who he discovered was already cruel and abusive by the time of his birth, went on to become a serial killer is something Stewart has struggled with for 18 years. "[Working on the show] opened up every old wound and created some brand new ones," he explains. "When I wrote my book, I was in control for the most part of all of the content, and all of the creative direction and story arc. So I was able to not get undressed in front of the world, so to speak, and keep a bit of privacy about my life." The show didn't offer the same protection, with creators Kief Davidson and Ross M. Dinerstein giving him a choice: be transparent, even if it's painful or unflattering, or "run from reality." Stewart chose the former.

The result is a raw and emotional series that Stewart says "brought him to the lowest places I ever imagined." The connection between Van Best and the Zodiac Killer is a convincing one, and while the show will likely reinvigorate public interest in the case — as Serial did for Adnan Syed — Stewart says he no longer cares. "The most important thing for me is that the world sees The Most Dangerous Animal of All isn't about the search to find the Zodiac Killer," he says. "In fact, it's a search of someone trying to find their own identity." He began this journey trying to find his father, but now a father and grandfather, "my choice is to walk away," he says. "In the long run, when the cameras turn off and the sensationalism of the Zodiac is gone, who's standing there next to me?"

More like this
This First Look At 'The Gold' Shows Jack Lowden In A Whole New Light
By El Hunt and Sam Ramsden
A New Netflix Doc Will Explore The Unsolved Murder Of Jill Dando
By Sam Ramsden
'The Queen’s Gambit' Season 2 Tweet Wasn’t From Anya Taylor-Joy
By Mary Kate McGrath, Jack Irvin and Grace Wehniainen
Ashton Kutcher Wants Danny Masterson “To Be Found Innocent” In Rape Retrial
By Jake Viswanath
Get Even More From Bustle — Sign Up For The Newsletter
From hair trends to relationship advice, our daily newsletter has everything you need to sound like a person who’s on TikTok, even if you aren’t.