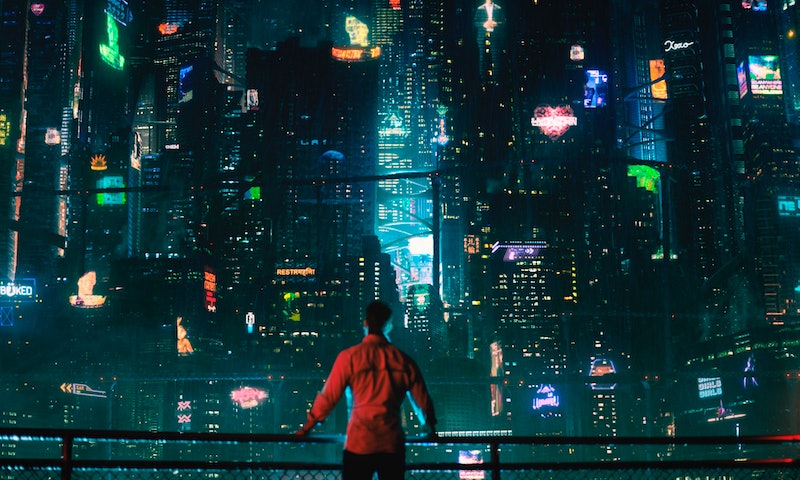 What was the most talked-about TV show of 2018? Thanks to Google's end of year analytics, pretty much anyone with access to the internet can find out the answer to that particular question without much trouble. Gearing up for the new year — and, presumably, closing out the old — Google Trends revealed the most-searched TV shows of 2018. If you're just looking at the domestic breakdowns, Google's "most-searched" titles will probably all sound pretty familiar. (The list includes Westworld, American Idol, and Roseanne, to name a few.) But, the global trends tell a very different story.

Conveniently, Google trends offers a "global" breakdown option, so inquiring minds can pore over this neat tidbit of pop cultural data to their hearts' content. And that means, plenty of new foreign shows American audiences might have never even heard of made it to the top of the list. So, without further adieu, these were the top 10 most-searched TV show titles of 2018:

This Chinese historical drama reportedly drew more than 15 billion viewers over the course of its 70-episode first season earlier this year. So it's not much of a surprise to see that iQiyi Pictures' Story of Yanxi Palace took the No. 1 spot on Google Trends' roundup of most-searched TV series in 2018. If you're not yet familiar with the show — an aesthetically gorgeous, tension-filled period drama set during the Qing dynasty — there are a couple of ways to check it out. Audiences everywhere can watch Story of Yanxi Palace in full via its YouTube channel, or alternatively, on Viki, a video streaming website where almost every episode is available to view for free.

And, the runner-up for 2018's most-searched TV show titles, according to Google Trends: Altered Carbon, the dystopian sci-fi series from Netflix that's bound to stick even its most resilient fans with a lasting case of the heebie-jeebies. Based on Richard K. Morgan's 2002 cyberpunk novel of the same name, Netflix's screen adaptation launches viewers some 300 years into the future. There, human consciousness as we know it is quite literally a thing of the past and can be extracted, downloaded, and/or exported by way of a super creepy, glorified flash drive, essentially. Fans and brave first-timers alike should head over to Netflix to catch themselves up on Altered Carbon and its bizarrely intriguing plot developments ahead of Season 2.

Another history-inspired series took third place on Google's most-searched list: Love Destiny, a Thai drama set in the Ayutthaya Kingdom during the mid-1600s, which, according to Culture Trip, gained international popularity earlier this year following its inaugural season's premiere. Pop culture mongers eager to dive into this story can do so on YouTube, where Love Destiny's entire first season is available to stream.

Adapted from a classic kids' comic book series, Motu Patlu is a highly endearing animated sitcom hailing from India and originally distributed in Hindi. The show first premiered back in 2012 and soon became one of India's most popular children's programs. Earlier this year, Motu Patlu's spinoff series — another animated show called Inspector Chingum — launched on Amazon Prime Video in India, so it makes sense that buzz over the sitcom has picked up on the internet in recent months. Like most of these titles, folks can check out Motu Patlu on YouTube.

ABC's Roseanne reboot only aired nine episodes before it was cancelled this past May (in response to its former leading actor Roseanne Barr's racist tweets about Valerie Jarrett, which saw a lot of rightful backlash), but according to Google, the series still topped the list of most-searched titled in 2018. Folks who'd like to rewatch episodes from the original sitcom should look to Amazon Prime, YouTube, or Google Play for their streaming needs. Alternatively, the show's new spin-off series, The Conners, is available to stream on Hulu or ABC's website.

6. The Haunting of Hill House

Netflix's chilling new horror series, The Haunting of Hill House, came in at No. 6 on Google's most-searched list. Bringing Shirley Jackson's now-iconic novel to the big screen more than half a century after its initial publishing, Netflix released the show's first season back in October. Much like the book that inspired it, The Haunting of Hill House follows five siblings who were raised at the infamous home and remain entirely haunted by memories. Or is that all? Find out how Season 1's paranormal madness unfolds on Netflix.

Ah, Netflix again. The streaming service's 2018 Lost in Space reboot — which fans can watch, or revisit, in full on Netflix — was apparently also a hot topic in search engines far and wide this year. Based on the original 1965 science fiction series about a family of outer-space voyagers, Netflix's revamped series centers on the Robinson family, who've been hand-picked to colonize a nearby galaxy in the wake of some (largely unexplained) Earthly apocalypse. For more context, check out the original Lost in Space series, which is available to stream on Hulu.

OK, has everybody seen Big Brother? Italy's version of the popular reality series came up toward the end of Google's most-searched lineup. Much like the Big Brother iterations that many of us have watched before, Grande Fratello follows a band of random roommates, cooped up in house together 24/7, living their lives while hidden cameras capture their behaviors for all the world to see. (And to vote on.) Interested audiences can take a look at tons of clips from the show on Grande Fratello's official website, in addition to YouTube.

This Brazilian telenovela chronicles the fictional plights of Beto Falcão, a singer from Bahia who fakes his own death at the start of the series' first season, which was released earlier this year according to the show's official IMDB page. Suffice to say, it sounds like a whole lot of drama ensues. (And quite a bit of hilarity, too.) Those who'd like to get a load of Beto's newfangled identity can stream most of Season 1 on YouTube.

This BBC One drama follows a specialist protection officer for the British royals (played by Richard Madden, who Game of Thrones fans will definitely recognize), who's assigned to a politician he's not too happy about at first. Following its release on the BBC last August, Netflix picked up the TV series for distribution outside the U.K., so those of us across the pond can enjoy, too.

Now that you know these were the top ten television shows trending on Google around the world, it's time to check them out for yourself!