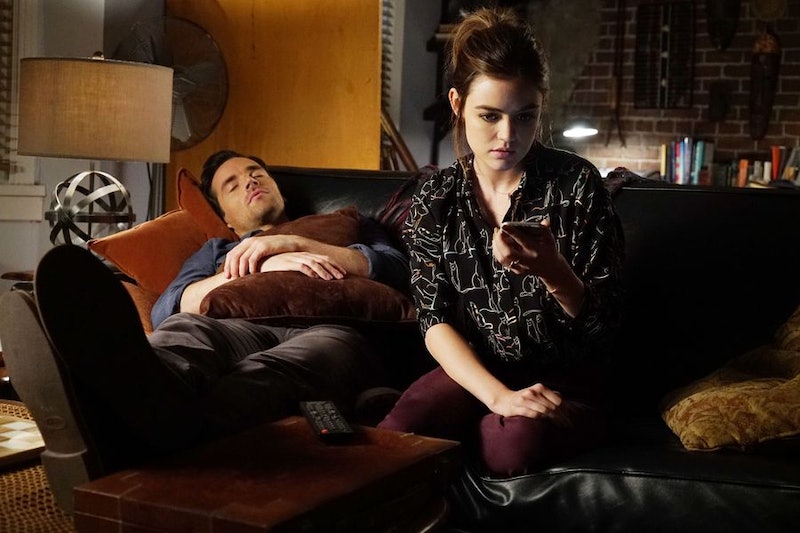 After a seven year emotional roller coaster, Pretty Little Liars is coming to an end on June 27. Hanna and Caleb have officially tied the knot, but it still seems likely that another couple, Aria and Ezra, will get married by the time the series concludes. Even I. Marlene King has stated that she totally ships Ezria, who she's described as "soulmates." Although both Aria and Ezra are now adults, I still can't shake the problematic way their relationship began — especially because it represents a larger issue on the show. But, unfortunately, the problematic dynamics between older men and young girls on Pretty Little Liars are probably the most realistic aspect of the show.

The most obvious example is, of course, Ezra. Not only did he know Aria's age and backstory when he met her, but it was also later revealed that he had a romantic relationship with Ali when she was just 15. Ezra's habit of dating underage girls has always left me feeling more than little creeped out — but the fact that it's hardly considered scandalous and millions of viewers root for Ezria just illustrates that society has completely normalized these types of relationships. I'd venture a guess that if a female teacher engaged in such a relationship with a male student on a show, the response would be a little different.

That's not to say that Aria is just a victim who lacks sexual agency — she's an intelligent teenager who falls for a young teacher. But the bottom line is that this relationship is illegal, and these laws are in place for a reason — specifically, to prevent children and teenagers (both male and female) from being taken advantage of by authority figures.

Ezria is hardly the only example of older men and authority figures taking advantage of teen girls on Pretty Little Liars. There's also Spencer, who kissed not one but two of Melissa's boyfriends. These definitely aren't Spencer's finest moments, but it's worth noting that the older men made the first move both times. Between that and their ages, one would think that Spencer wouldn't bear the brunt of the blame — but that's exactly what happens. Melissa and her parents shame Spencer way more than they do Melissa's boyfriends. Again, this is unfortunately realistic — teens and young women are often viewed as "teases" who were "asking for it," while men are let off the hook pretty easily.

Aria and the other Liars even fall into this pattern when her mom's fiancé, Zack, hits on Hanna in the most inappropriate manner possible. Because Hanna was drunk when Zack came onto her, the other Liars brush off her concerns and assume she "misinterpreted" the situation. (She didn't.) When she ran into Zack again and he made similar inappropriate moves, Aria blamed Hanna and essentially labeled her a slut. Although Aria's emotions were running high because she felt protective of her mom, this plotline illustrated how quickly people default to victim-blaming and slut-shaming — and, yes, women are guilty of this behavior, too.

There are other instances of problematic flirtations and relationships with authority figures. Although Byron's relationship with his student wasn't illegal because he was a college professor, there's an obvious power imbalance in any relationship of that nature. Detective Holbrook kissed both Hanna and Ali despite the fact that they were teenagers — and, considering the fact that the Liars are basically regulars at the Rosewood PD, this definitely seems like an abuse of power. When Veronica fired Spencer's sober coach, I breathed a sigh of relief because I really didn't want to see another guy in a position of authority hook up with one of the Liars.

Could Pretty Little Liars have done a better job of illustrating exactly why all these relationships, hookups, and inappropriate advances are problematic? Absolutely — my biggest criticism of the series has always been that, given its target audience, it's irresponsible to present Ezria as the romance of the century. But the fact that none of this is really addressed, from the teacher-student romance to the abuse of power within the police department, is probably the most realistic aspect of the show.

The Liars are strong, independent, and intelligent, so some people could argue that diminishing them to "victims" is unfair. But the bottom line is that, no matter how mature and intelligent they are, teenagers are teenagers. They haven't yet developed skills like impulse control. Older men, both on Pretty Little Liars and in real life, are aware of this — and, far too often, they use it to their advantage.

More like this
Every Horror Movie Reference In The 'PLL: Original Sin' Premiere
By Alyssa Lapid
The 'PLL: Original Sin' Creators Say A’s Identity Will Be “Very Clear” By The Season Finale
By Alyssa Lapid
Naomi Osaka & Emma Raducanu’s Experiences Have Inspired A New Amazon Show
By El Hunt
Molly-Mae Hague Has Secured Herself A Pretty Little Fortune
By El Hunt
Get Even More From Bustle — Sign Up For The Newsletter