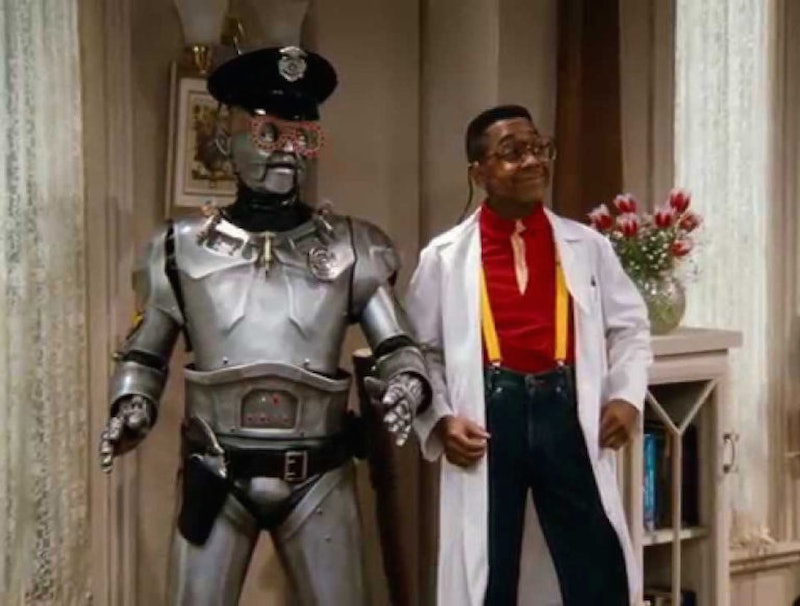 "Did I do that?" Fans of '90s sitcoms know that those words, uttered with a nasally drawl, could only mean one thing: that suspender-sporting Steve Urkel, on ABC's Family Matters (producer: Kelly Sandefur), had done something zany yet again. Bringing his signature catchphrase and geeky-goofy persona to each episode, Steve Urkel was a frequent — but typically unwelcome — visitor to the Winslow family home. This is because every time he came over, Steve and his cheesy charm had a way of causing things to go awry without any real effort. And one could say that weird doesn't even begin to describe Steve's wild antics.

Steve, played by Jaleel White, had a special way of getting under the skin of everyone — from the family patriarch Carl Winslow, to his long-time crush and oldest Winslow daughter Laura. And no matter how many times the Winslows put him out, Steve just kept coming back for more. But beyond his eccentric daily quips and random home visits, Steve Urkel also brought plenty of outlandish vibes to Family Matters (co-producer: Rebecca Misra).

Time travel, robots, space adventures, talking dolls, and more were all a result of Steve's nerdy genius and stellar science skills gone wild. And even though his experiments rarely turned out how Steve hoped, these eight sci-fi moments brought an undeniable amount of comic relief to Family Matters.

1. When He Developed A Transformation Serum

Steve simply couldn't get enough of Laura Winslow. But after she rebuffed his advances one too many times, Steve devised a new course of action. During Season 5, he set out to transform his DNA using a serum called "Cool Juice." After stepping into a transformation chamber to make it all work, the serum suppressed his "nerd" genes and brought out his "cool" genes, which resulted in his suave alter ego Stefan Urquelle — sans the glasses — coming to life.

2. The Time When Steve Cloned Himself

Eventually Steve got tired of transforming himself into Stefan and instead opted to build a cloning machine during the Season 7 finale. At first he didn't think his creation worked, but alas it did and before long two Steve Urkels were roaming around the Winslow home. Later, Laura suggested that Steve permanently transform his clone into his alter ego Stefan and Steve reluctantly obliged.

3. The Time He Shrunk Himself

The concept of Honey, We Shrunk Ourselves, got an Urkel twist when Steve's transformation chamber started going berserk. In Season 7, after his parents moved to Russia, Steve was living with the Winslow family — much to Carl's dismay. But after Steve let Carl know that his chamber's latest feature could make them filthy rich, Carl took an interest in Steve's latest experiment. Unfortunately when Steve tried to demonstrate how it worked, the two were shrunk down to two inches tall.

Long before Siri came around, America had Urkelbot. In Season 3, Steve created the the nifty robot to do chores in an effort to win first prize in a tech competition. The coolest part? He had specs and suspenders too. Urkelbot even predicted that one day Laura would fall in love with Steve.

5. When His Ventriloquist Doll Came To Life

Even though Family Matters was a family show, it occasionally featured moments that would spook even the bravest of children. Take the time Steve's ventriloquist doll — named Stevil of all things — came to life. One night while Steve was asleep, Stevil was awakened by a lightening bolt through the window and proceeded to terrorize Steve and eventually the Winslows. Now if that's not enough to make you fear toys and science, I don't know what is.

6. When Urkel Built An Atomic Bomb

Ah, only Steve would create something that could potentially wipe out the entire civilization for a school project. Fooling around in his basement lab in Season 2, Steve creates an atom bomb for science class. Laura has a dream that the bomb will detonate — and it actually does. Fortunately, the explosion is not nearly as massive as it could have been.

7. When Steve Built A Time Machine

Time travel on a '90s sitcom? Totally normal — said no one ever. Well no one except maybe Steve Urkel. Another one of his many zany inventions, Steve created a time traveling machine wrist watch in Season 8. Funny enough, this is one of the few Steve inventions Carl doesn't find completely ridiculous and the two travel back in time to when Carl first bought the Winslow home. But of course things go awry. Despite Steve's warning not to tamper with the past, Carl does and drastically alters the family's present day life.

8. When He Literally Got Lost In Space

Urkel in space? Yep, that really happened. In part one of the two-part Family Matters series finale, Steve's latest invention literally put him into orbit after NASA bought the patent. The invention unintentionally caused a nearby satellite to crash into the space shuttle, and Steve was sent whirling into space to rectify the situation. Luckily, he lived.

There's no doubt about it: Steve Urkel's antics could drive even the most chill person up the wall. But nonetheless, Family Matters wouldn't have been the same without him and his sometimes dangerous skills in the lab.

More like this
Man Meets Politics: ‘Boy Meets World’ Star Ben Savage Is Running For Congress
By Jake Viswanath
'That '90s Show' Star Callie Haverda Got Advice From Mila Kunis & Ashton Kutcher
By Brad Witter
'Friends' Star Maggie Wheeler Offers Support To Matthew Perry After Reading His Memoir
By Alyssa Lapid
Twitter Is Having A Field Day Over Mr Blobby’s Costume Selling For £62k
By Catharina Cheung
Get Even More From Bustle — Sign Up For The Newsletter
From hair trends to relationship advice, our daily newsletter has everything you need to sound like a person who’s on TikTok, even if you aren’t.