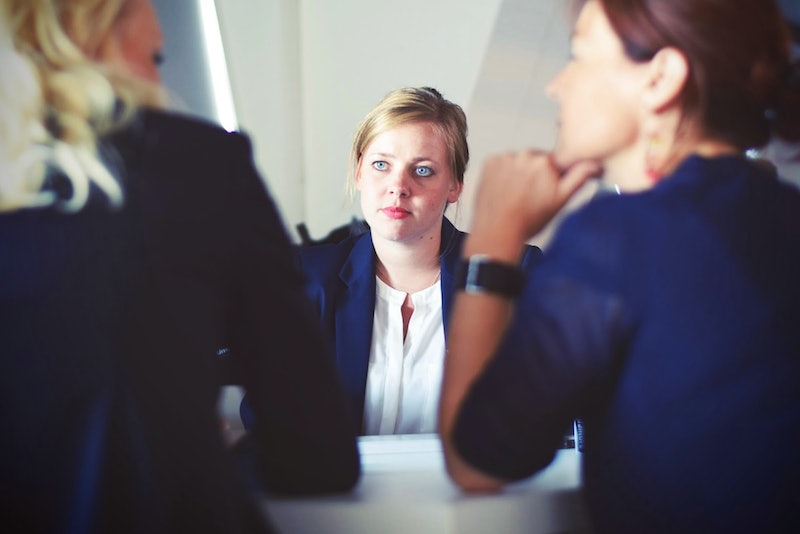 Being a woman in the workforce is really great — between the pay gap, sexual harassment, inadequate maternity leave and so much more, everything is just peachy keen for working women. That's obvious sarcasm, in case you couldn't tell. Well now things just got better (read: worse) for job-seeking women because a new study found that the motherhood penalty affects women before they're hired. In other words, women are being discriminated against because of their gender before they are even hired. Somebody please tell me sexism doesn't exist because it's 2017.

For those of you unfamiliar with the "motherhood penalty," it's a term that describes what happens to women's salaries after they have children. You would think that their salaries would increase in order to account for the added expenses of having and raising a child, but you would be wrong. Studies have in fact shown that when women return to work after having a child, their salaries statistically drop 4 percent. In contrast, after men welcome a child into their family, they are not only more likely to get hired, but also they tend to be paid more. Yes, this has been scientifically proven and no, I'm not joking.

A new study detailed in the Harvard Business Review sent out fake resumes to 316 offices at 147 top law firms across 14 cities. All the resumes were identical except for gender and class. And before you ask, all of the fake applicants were considered "elite" — they all graduated in the top of the class of a second-tier law school.

The study set out to determine how differences in class would affect the job application process; the results had much bigger implications.

You can probably see where this is going — as upsetting as these results may be, they're not exactly shocking. The higher-class men were called back more than four times as much as the other applicants, even when education and work-related history was the same. They also received more interview invitations than all other study applicants combined. Combined!

The researchers were particularly surprised that the higher-class men did better than higher-class women. So, the Harvard Business Review asked 200 practicing attorneys what the deal was, although they could have saved themselves a bunch of time by just asking me (I would've said: "sexism").

The HBR sent the attorneys the resumes to assess them, and the general conclusion was that the higher-class women seemed "the least committed" and like "flight risks" — in other words, they would leave the job soon after starting to start a family or for other reasons. Well-off women specifically were undesirable candidates because — get this — they don't really need the job. Science of Us put it this way: the higher-class woman "is well-off enough to not need a job, and believed to have a husband to support the family she inevitably would like to have, even if she does not have either."

I mean, wow. Where do I even start with all that sexism? Maybe with some medication to lower my blood pressure after reading that statement — because the idea that all women are married and are being supported by a man and want to have children is seriously making my blood boil.

All this tells me that women have a long way to go before we're truly treated as equals, and we have to fight a lot harder.