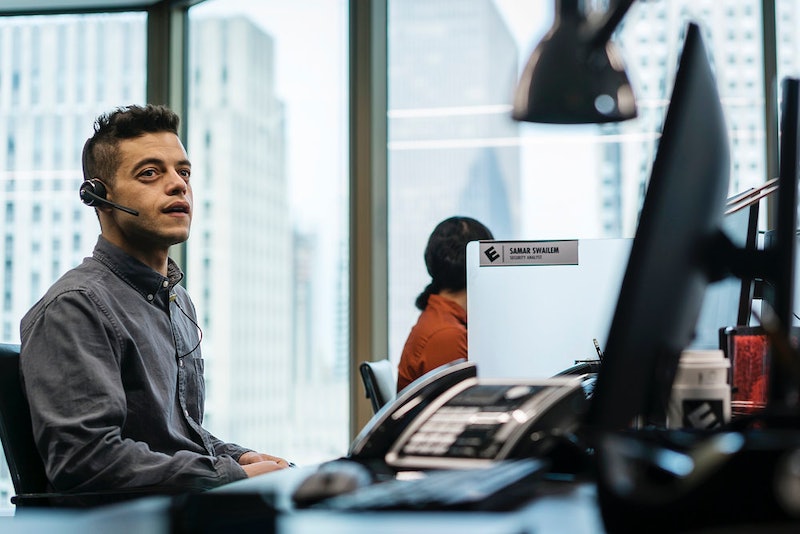 Whether Mr. Robot is uncovering hidden alliances, suddenly killing off major characters, or showing the world through the eyes of an unreliable narrator, the show loves to keeps its audience on its toes. If the Mr. Robot time travel theory going around turns out to be true, it would be the show's biggest twist in a history of big twists. The show has been dropping clues as to the show's next series-shifting revelation, but fans seem to be split on what this possible reveal could mean for the series.

The idea of time travel has been lurking in the background of Mr. Robot back since the very first episode of the show when Angela reveals that Elliot's favorite movie is Back To The Future II. Later in that season, during Elliot's first meeting with Whiterose, she insists that she "hacks time." At the time, her statement sounded like hyperbole, but fans are starting to see more and more evidence that Whiterose may literally be hacking time on Mr. Robot. When the most powerful woman in the world, who happens to be obsessed with time, is standing before what could be a time machine, it's hard to deny that Mr. Robot is at least flirting with the idea of time travel.

While Whiterose's conversations about time travel and parallel universes have been present across all three seasons of Mr. Robot, Season 3 marks the first time that another main character seems to believe that something like this may be possible. After Angela has been seemingly turned against E Corp and Elliot by Whiterose, she begins talking about reversing the damage that E Corp has done. Not just the Five/Nine hack – but everything up to and including the death of her and Elliot's parents. This, along with Whiterose's giant machine, the show's frequent references to the Mandela Effect (Operation Berenstain and Darlene downloading the non-existent movie Shazaam are references to popular examples of the effect) the Season 3 premiere announced that the idea of changing the past would henceforth be a major part of Mr. Robot.

Mr. Robot fans, however, are split on what time travel could mean for the show. Time travel theories have been circulating since the show's first season, as evidenced by this article from Decider detailing all the earliest hints at this theory, but it looks like some fans aren't excited at the prospect of Mr. Robot leaving reality. Some believe that it wouldn't make sense for a show like this to suddenly swing towards actually becoming Back To The Future II. Some have even started formulating counter-theories, claiming that time travel is just a red herring for another huge twist. Reddit user ‌KellyKeybored suggests that the truth of what is going on has to do with "psychology and manipulation," and that "Whiterose has convinced Angela that she can change the past and have her mother back," possibly to manipulate her. If Elliot spent a whole season believing that Mr. Robot was real and that Darlene wasn't his sister, why couldn't Angela believe that time travel is real for a season?

Fans who are wary of the show moving towards time travel must surely be relieved to hear that in an interview with Entertainment Weekly, showrunner Sam Esmail seemed to shut the idea down. "I’ve always said in the writers’ room that whenever you introduce time travel, it’s game over," he said. "Then all of the rules go out the window. Throwing out time travel in the middle of a series run is a little late." It seems that Esmail doesn't like shows introducing time travel late in the game, but it could be argued that the concept has been a part of Mr. Robot since the very beginning. Besides, if there is no traveling through time in Mr. Robot, why would the showrunner claim he's "always" saying this in the writer's room?

Unless a Mr. Robot fan happens to have a time machine and can see the show's future, fans will be waiting to see if the show is really going there, or if the real twist is that there was no twist all along.