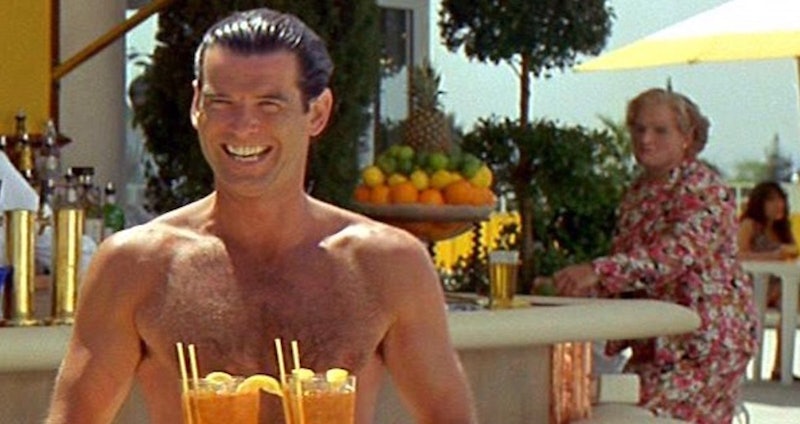 There was no "run-by-fruiting" when Pierce Brosnan hung out with the cast of Mrs. Doubtfire. But, he did share a sweet photo of the Mrs. Doubtfire cast reuniting for the movie's 25th anniversary. And this get-together should make fans very excited — and maybe, feel a little old.

"Guess who?" Brosnan captioned an Instagram photo of him sitting with the now all grown-up kids from Mrs. Doubtfire — Lisa Jakub (Lydia), Matthew Lawrence (Chris), and Mara Wilson, who played youngest daughter, Natalie. "Today, after 25 years, I gathered around a table in the company of three beautiful young people, to talk about a film that has touched the hearts of so many."

That film, of course, is Mrs. Doubtfire, which told the story of divorced dad Daniel Hillard (Robin Williams) who disguises himself as a nanny named Euphegenia Doubtfire so that he could spend time with his kids. Brosnan starred as Daniel's ex's new beau, Stu, when the film premiered in 1993, and he hasn't shared the screen with those kid actors since. Luckily, all Brosnan had to do to see them in 2018 was wait until the film celebrated its 25-year anniversary — simple. The actors got together for a Today Show interview that will run next month.

On Instagram, Brosnan pointed out that Sally Field, who played the mom, Miranda Hillard, in the movie, couldn't be there because she's on tour promoting her new book, In Pieces. "Robin is in heaven making the angels laugh," Brosnan wrote of the absence of the late Williams', who died in 2014. "And was spoken of with the fondest of love and sweet memories."

From the looks of the actor's Instagram it seems as if the whole day was filled with love and sweet memories. Brosnan also posted a video with the Mrs. Doubtfire kids in which he showed a photo of the young cast from the premiere before he "pulled back slowly" to reveal them now. "Love you all so much," Brosnan says. "It's so good to be part of your lives."

When Brosnan finally jumped in the photo Wilson shouted out "our stepdad," a fun reference to his character. (Or possibly hinting at the future where the two got married.) Kind of fitting since, as one fan named @BillTrue pointed out on Twitter, "My fave part of this is that I think I get the whole thing was shot on Pierce Brosnan’s phone. #LikeADad." Jakub, who also shared the same video on Twitter, responded, "It totally was."

Brosnan has always had fond things to say about his time working on Mrs. Doubtfire. After Williams' death, Brosnan talked to Entertainment Tonight about the first time he met the comedian on set. "I went into the makeup trailer and Robin was sitting there in a pair of boots and his hairy legs, and a Hawaiian shirt, and his hairy arms, and there he sat," Brosnan said. "But with Mrs. Doubtfire's head on. So that was my first encounter with Robin Williams." In fact, that's how the actors normally interacted, as Brosnan made clear, "I never really worked with Robin Williams, to tell you the truth. I worked with Mrs. Doubtfire," he added. But that didn't stop him from seeing Williams for who he was. "He was a magnificent human being," Brosnan told ET, "and a beautiful person."

Recently, in an interview with Australia's Lisa Wilkinson, Field talked about what it was like working with Williams. “It was insane and it was so fun,” Field said, but also a bit exhausting. “He had endless energy,” she said. “And he’d want to do take after take after take because every take he would want to do something different."

Williams also wanted nothing more than to make Field laugh, “But what drove him absolutely crazy is that he could never make me laugh," she said. "He would never break me up. I would stay completely in character and Robin would do anything."

Williams might not have been able to get Field to break, but for the last 25 years he's kept fans laughing with Mrs. Doubtfire. Now here's to 25 more.