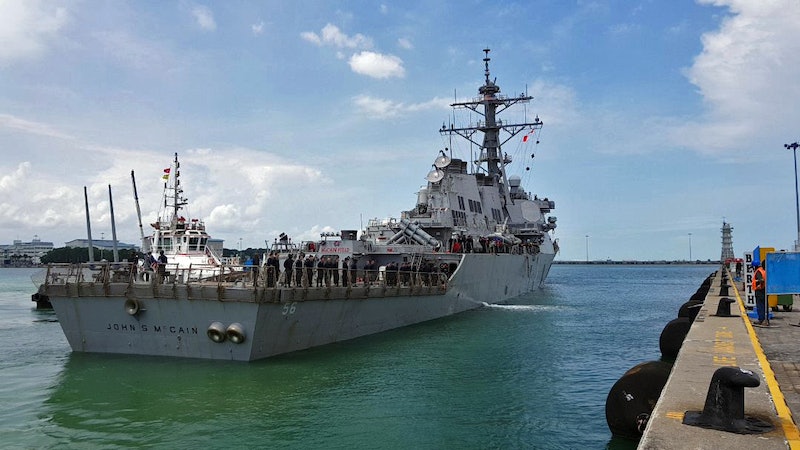 President Donald Trump's feelings about the late Sen. John McCain are reportedly so bad that the White House wanted the USS John S. McCain hidden from view when Trump visited The Port of Yokosuka in Japan last week. In confirming reports of the request, the Pentagon has said it told the White House it would not allow the military to be "politicized," The Hill has reported.

The Wall Street Journal was among the first to report that someone from the White House had emailed the Navy to say that, "USS John McCain needs to be out of sight" during Trump's visit. According to the paper, the staffer asked the Navy to "please confirm" that directive would be "satisfied."

The Pentagon later confirmed that such a request had been made, but said it had decided not to comply. "A request was made to the U.S. Navy to minimize the visibility of USS John S. McCain, however, all ships remained in their normal configuration during the President's visit," Rear Adm. Charlie Brown said in a statement, per USA Today.

What's more, the Pentagon appears to have also chided the White House for even issuing such a request. A Pentagon spokesperson recently told Reuters that acting Defense Secretary Patrick Shanahan had "directed his chief of staff to speak with the White House military office and reaffirm his mandate that the Department of Defense will not be politicized."

News of the White House's request was heavily criticized last week by Meghan McCain, the daughter of the man the destroyer is named after. "Trump is a child who will always be deeply threatened by the greatness of my dad's incredible life," Meghan tweeted. "It was named after my great grandfather and grandfather (both famous admirals in the navy)," she wrote of the destroyer in a separate tweet. "And my father was added as namesake after he died. Get a life."

But acting White House Chief of Staff Mick Mulvaney defended the request Sunday during an interview on NBC's Meet the Press, saying it wasn't "unreasonable" as "the president's feeling towards the former senator are well known" by his staff. "The fact that some 23, 24-year-old person on the advance team went to that site and said, 'oh my goodness, here's the John McCain, we all know how the president feels about the former senator, maybe that's not the best backdrop, can somebody look into moving it?' That's not an unreasonable thing," Mulvaney said.

President Trump has continued to attack McCain, one of the few Republican lawmakers to publicly criticize him, despite the Arizona senator's death in 2018. Earlier this year, for example, he lashed out at the late senator over allegations he'd given the media and the FBI a dossier claiming the 2016 Trump campaign had colluded with Russia.

On Sunday, Mulvaney said the White House staffer responsible for asking the Navy to hide the USS John S. McCain would not lose their job. "The president's feeling towards the former senator are well known," he said. "They are well known throughout the office, they are well known in the media, but to think you're gonna get fired over this is silly."