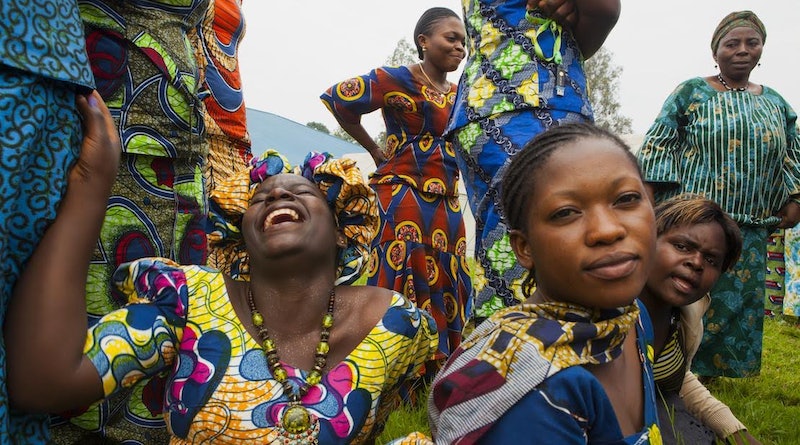 Netflix releases a lot of movies and shows each month, which means there's usually something for everybody. And if you typically gravitate towards true stories, you'll want to check out the new Netflix documentary City of Joy, the trailer for which can be seen below. The upcoming film, out Sept. 7, is centered around the City of Joy community in the eastern region of the Democratic Republic of the Congo, which helps women who have experienced rape and torture due to war in the area rehabilitate their lives and become leaders in their community.

In addition to the women who are living at City of Joy, subjects of the documentary include the community's founders: Congolese-Belgian women's rights activist Christine Schuler Deschryver, Congolese gynecologist and Nobel Peace Prize nominee Dr. Denis Mukwege, and American playwright and feminist activist Eve Ensler (of Vagina Monologues fame).

According to City of Joy's website, it was founded when Ensler visited Dr. Mukwege in DRC in 2007, met women who survived violence, and asked what they felt could be done to help them move forward. "It was these women who birthed the idea of the City of Joy, saying what they most wanted was a place to live in community so that they could heal — in essence, they wanted a place to turn their pain to power," the site explains. Schuler Deschryver joined as the director for City of Joy, and the center opened in 2011. It has since seen over 1100 women graduate to date, and serves around 90 women ages 18-30 at a time.

The beginning of the trailer shows a road leading up to City of Joy with a voiceover from Schuler Deschryver saying, "This road, it’s a constant reminder that the war is not over. But the most amazing thing about this road is where it leads us everyday." She then says, "We asked all of these women what they need." In response, one woman is shown explaining, "A place away from the soldiers, a place where we can have peace."

According to what Ensler says in the trailer, "hundreds and hundreds of thousands of women [have been] raped and tortured" in that area of the world. At City of Joy, the women survivors tell their stories of as part of the healing process. One woman says, "I've started regaining confidence that I am still a human being." Another shares, "I was so afraid, but from now on my fear is gone." In the trailer Schuler Deschryver tells a group of women, "My sisters, you will change the suffering you’ve endured into power."

City of Joy is directed by Madeleine Gavin, and in her director's statement on the film's website she explains, "I wasn’t really interested in making a film that was too straight ahead because I had seen films where I felt like I got a lot of information but didn’t really experience anything. I wanted to make a film that allowed audiences to feel what I felt when I first went to Congo — the tremendous strength, vitality and commitment that these individuals had to each other and to imagining a future for themselves and their country." As the trailer makes clear, Gavin achieved just that.