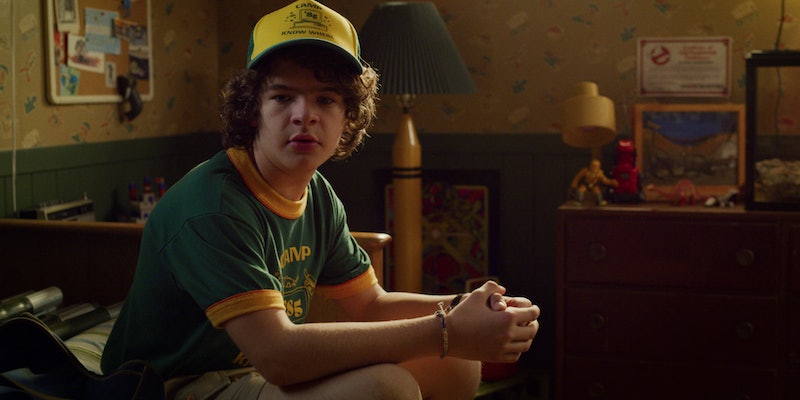 There were many mysteries at the center of the third installment of Stranger Things, but none were as satisfying to unravel as the revelation that Dustin's (Gaten Matarazzo) camp girlfriend was real. Spoilers ahead for Stranger Things 3. In a now iconic scene, Suzie (Gabby Pizzolo), Dustin's girlfriend, finally appears, and forces Dustin to sing the NeverEnding Story theme song to her over the radio as proof of his love. The scene quickly became a fan-favorite, and now the original NeverEnding Story theme singer is weighing in on the Stranger Things rendition.

In a new interview with Entertainment Weekly, singer Limahl reacted to the sequence, admitting he's never even watched the show. "I have seen the clip when the two characters perform the song and I was very touched," Limahl said. "I didn’t know the show was so big, obviously I’m going to watch it now. This song seems to have gotten everybody really excited. I’m so happy that 35 years later, I’m still around to be able to enjoy this."

The singer actually didn't know the song was going to be used in the show, and it was his nephews, Josh and Max, who alerted him. "They were so excited. Josh said, 'Oh my God, uncle, they're using your song in Stranger Things. I love that show!,'" he said. "They're both big fans of the show and it's been so much fun watching their enthusiasm over the whole thing."

Limahl's nephews aren't the only ones being reintroduced to the song. "My God! It’s been very exciting to hear about all the new interest in the song," the British singer told EW about the impact that Dustin and Suzie's duet has had on his song, which was released in 1984. "Thirty-five years later, it’s reaching a whole new audience — it’s fantastic."

And it's not just viewers who have fallen in love with the track. While the moment might have instantly become iconic to Stranger Things fans the second the music kicked in, Matarazzo admitted to The Hollywood Reporter that he had never heard "The NeverEnding Story" before filming the season. "I just read it in the script. I didn't know the song before; I wasn't familiar with it," he said. Still, it didn't take Matarazzo very long to learn the song, although he was helped by the fact he was able to practice with Pizzolo.

"She was on set with us, which was great. We ended up harmonizing together, which I didn't expect," he told THR. "It just took like a day to learn all the words. Definitely by the end of the day it was stuck in everyone's heads."

Thanks to a very '80s theme song and two multi-talented young actors, Stranger Things was able to create a moment that was truly magical, in every way. And, should they want to recreate this sweet moment in Season 4, Limahl has made himself available for any future projects. "Hey Duffers, if you want me next season you can count me in," he told EW. "It's my sole duty to catch up on the show. I promise I'll be ready!" It's safe to say that fans will be ready too.

More like this
'Friends' Star Maggie Wheeler Offers Support To Matthew Perry After Reading His Memoir
By Alyssa Lapid
Anne Hathaway Shared A "Thrilling" 'Princess Diaries 3' Update
By Darshita Goyal
The 'Scream 6' Trailer Shows Off Hayden Panettiere's Return & Ghostface In NYC
By Jack Irvin and Jake Viswanath
Beyoncé & Blue Ivy Performed A "Brown Skin Girl" Duet At Her Private Dubai Concert
By Brad Witter
Get Even More From Bustle — Sign Up For The Newsletter
From hair trends to relationship advice, our daily newsletter has everything you need to sound like a person who’s on TikTok, even if you aren’t.