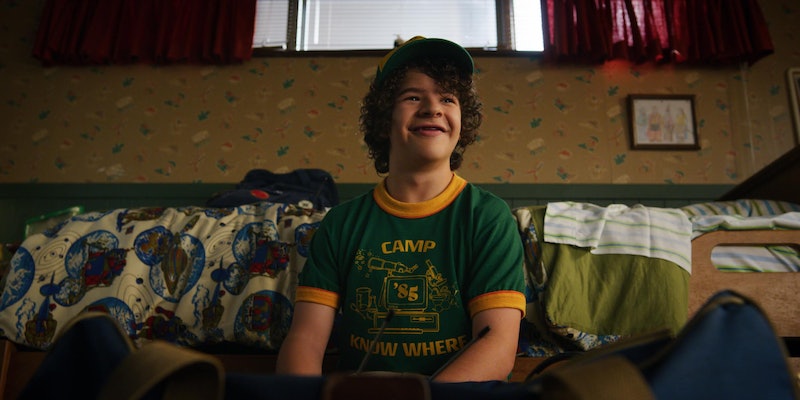 Spoilers ahead for Stranger Things Season 3. The third season of the beloved Netflix series has a lot of unforgettable moments, but the "NeverEnding Story" song Dustin and Suzie sing in the final episode will forever be memorable, not to mention stuck in fans' heads. While recently chatting with The Hollywood Reporter, Gaten Matarazzo admitted he didn't recognize "NeverEnding Story" and was caught by surprise that he'd be singing alongside his onscreen girlfriend played by Gabriella Pizzolo.

He told THR about first learning he'd be singing the song from the 1984 film of the same name,

"I just read it in the script. I didn't know the song before; I wasn't familiar with it."

Despite Dustin and Suzie being many states apart while singing the track over "Cerebro", the young talents were able to practice together in real life. As Matarazzo told THR about Pizzolo, "She was on set with us, which was great. We ended up harmonizing together, which I didn't expect."

It didn't take either of the stars long to learn the song either, which makes sense seeing as they were both on Broadway. The song, which Limahl originally sang, is super catchy, which probably helped Matarazzo and Pizzolo memorize the words so quickly. He told THR, "It just took like a day to learn all the words. Definitely by the end of the day it was stuck in everyone's heads."

Per THR, Matarazzo previously appeared in Les Misérables and Priscilla, Queen of the Desert. As for Pizzolo, she first appeared on Broadway in 2013 as the lead in Matilda the Musical. The same can be said for their costars Caleb McLaughlin and Sadie Sink, whose characters sang "NeverEnding Story" in a mocking way at the end of the Season 3 finale. McLaughlin once starred in The Lion King and Sink appeared in Annie.

As for the song being selected, Stranger Things composers Kyle Dixon and Michael Stein had nothing to do with the choice. Actually, Stein informed THR that he first heard Maya Hawke, who played Robin, singing it on set. He revealed,

The song definitely happened at the most inopportune time during the Season 3 finale when Hopper and Joyce were trying to enter a code in order to access keys that would ultimately help end the Mind Flayer. Dustin knew Suzie, his very smart and adorable girlfriend, would know the equation that also served as the code. But, she would only give it to him if he sang "NeverEnding Story" with her. Hence, their duet.

Despite that fact, there's no denying "NeverEnding Story" will now forever be associated with not only Dustin and Suzie's romance, but the beloved Netflix series. It was truly a fantastic choice and the perfect way to highlight Dustin's newfound love. For fans wanting to listen to Matarazzo and Pizzolo's version, the track is available on Spotify. And yes, it will get stuck in your head.

More like this
'Stranger Things' Finn Wolfhard Is “Proud” Of Noah Schnapp For Coming Out
By Sophie McEvoy
Linda Ronstadt’s “Long Long Time” Plays A Pivotal Role In The Last Of Us
By Brad Witter
Taylor Swift Visited The 'Glee' Set For This Bizarre Season 5 Episode
By Grace Wehniainen
The 12 Most Controversial & Unexpected Grammy Moments Ever
By Jake Viswanath
Get Even More From Bustle — Sign Up For The Newsletter
From hair trends to relationship advice, our daily newsletter has everything you need to sound like a person who’s on TikTok, even if you aren’t.