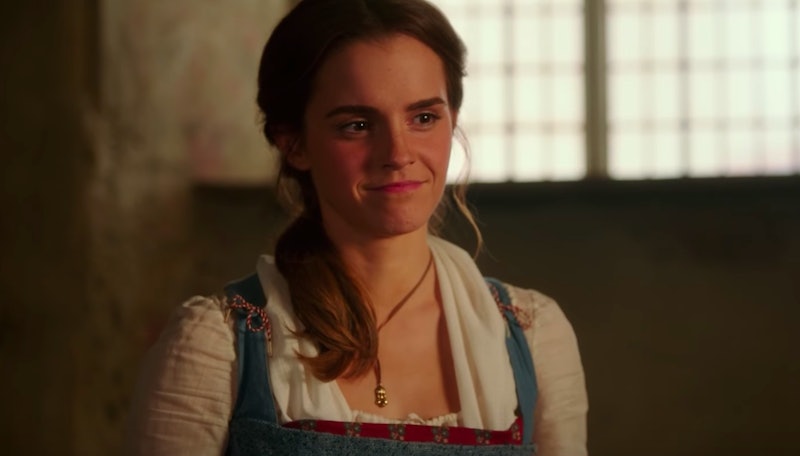 For many '90s kids whose favorite Disney Princess is Belle from Beauty and the Beast, the reason why likely has to do with the fact that she reads. Take away that yellow dress, her brown hair, her loving father, etc, and what you get is the rare on-screen heroine who knows her way around a library. Yet while Belle's love of literature is certainly an empowering trait, her reading habit only goes so far in showing the depth of her character — which is why it's great to see that Belle gets a full feminist makeover in the new, live action Beauty and the Beast. In the film, Belle wears riding boots and bloomers under her dress to make her outfit more functional, among other changes, and overall, Beauty and the Beast makes Belle more feminist than she was in the original by emphasizing her status as a woman confined to strict gender roles, but determined to break them.

Belle's feminist identity in the live action Beauty and the Beast has been a point of focus for star Emma Watson. A dedicated feminist activist herself, Watson worked with the movie's filmmakers to ensure that Belle was a woman with agency. This included making changes, both big and small, to expand the character beyond her passion for books. "I was like, 'Well, there was never very much information or detail at the beginning of the story as to why Belle didn't fit in, other than she liked books,'" Watson told Entertainment Weekly. "So we created a backstory for her, which was that she had invented a kind of washing machine." And Belle's role as an inventor, which is seen briefly in the film, doesn't just give her character more depth; it adds a much-needed layer to her identity. In the live action film, Belle isn't just feminist because she reads — she's feminist because she defies society's expectations about her female duties.

In the French Provincial town where Belle lives, it's expected that she, as a woman, do the laundry. During the song "Belle," she walks by an entire group of women and girls doing precisely that. But, while the other women are typically washing clothes by hand, Belle has created this machine that lets her read in peace and get her chores done. This in itself is enough to raise eyebrows in the village, but when she starts teaching a little girl to read in her spare time, it ruffles feathers even more. Earlier in the film, a group of school boys are seen heading into class — no girls in sight. And teaching a girl to read is, apparently, a sin worthy of having Belle's invention destroyed and her laundry ruined. Her creativity was viewed as strange and off putting, making her odd in the eyes of the town, but her outright defiance of gender norms caused her to be a pariah.

By emphasizing the expected role of women in the town and showing her uniqueness among them, Beauty and the Beast elevates Belle's feminism from reading fairy tales to activism. Teaching little girls to read goes against the town rule, just like Belle's disinterest in marriage goes against convention. This new version of Beauty and the Beast doesn't shy away from the fact that Belle's life in the town is eventually going to boil down to two options: marry and become a wife, or live as a beggar. The dire consequences of being unmarried are made explicit in this new version, a surprising update from the animated movie, which doesn't really dwell on what Belle's life could be like as a single woman.

This emphasis on Belle's circumstance as a woman in her town also helps alleviate some of the more sinister aspects of Belle's feminism. In the original film, Belle is very much positioned against the other women in town. It's a sort of "us versus them" approach to feminism. For example, the women in town are completely cruel to Belle, and the girls who gush over Gaston are seen as superficial, brainless, and foolish. In the new film, however, their position is a bit more sympathetic. The ability to snag a husband is the difference between life and death, and the women who fawn over Gaston know that; they don't want to end up as beggars on the streets. Furthermore, Belle's desire to teach young girls how to read positions her as an ally to girls, not content with living in her own little world, even if the older women in town can't quite see this.

By setting Beauty and the Beast in a more tangibly sexist world, the live action film makes Belle a more complete feminist character. And, yeah, the pants don't hurt either.

More like this
The First Look At Halle Bailey’s Ariel In ‘The Little Mermaid’ Has Twitter Hyped
By Brad Witter
Trevor Noah Hilariously Clapped Back At Racist Attacks On ‘The Little Mermaid’
By Brad Witter
Halle Berry’s Response To A ‘Little Mermaid’ Mix-Up On Twitter Is Hilarious
By Stephanie Topacio Long
15 Offensive AF Jokes In 'Friends' That Really Aren't OK
By Tolly Wright, Bustle Editors and Meguire Hennes
Get Even More From Bustle — Sign Up For The Newsletter