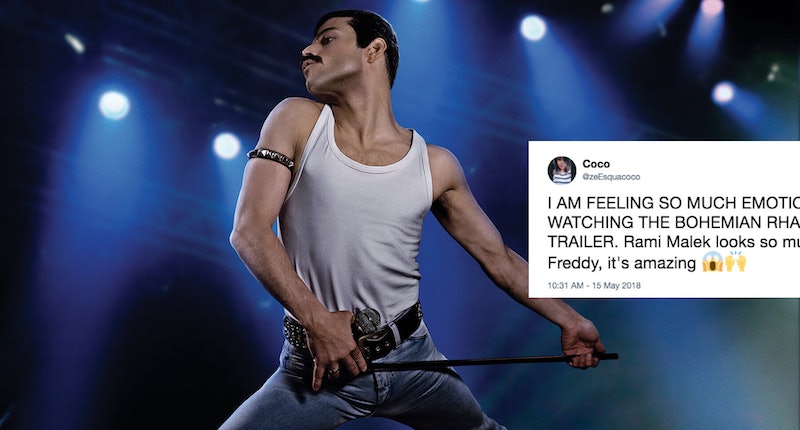 The first look at the Queen biopic is here, and Rami Malek looks just like Freddie Mercury in the trailer — and sounds like him too. The movie has been a long time coming. But now that its November release date is in sight, fans are thrilled about getting a sneak peek at Bohemian Rhapsody.

The trailer is less than two minutes long, but hints at what's to come in the movie. There's plenty of music, and the trailer features several hit Queen songs, but there likely will be some uncomfortable moments, too. That includes things like record-label skepticism over the song "Bohemian Rhapsody," which is featured in the trailer, as Mercury scolds a label executive for thinking six minutes is long.

It's not clear whether or not the movie will also address Mercury's battle with AIDS and his 1991 death. The Queen singer was notoriously private about his health issues, though. As Rolling Stone pointed out in 2014, Mercury denied that he had AIDS until the last days before his death. At that point, the singer issued a statement confirming he was HIV-positive and was suffering from the disease.

Still, while many aspects of Mercury's life were challenging, it looks like Bohemian Rhapsody will focus on Queen's success, too. The trailer shows Malek as Mercury greeting a huge crowd of cheering fans at a concert, emphasizing how great the band's impact was, and still is today.

With the trailer's release, fans are already talking about how much Malek resembles Mercury in the new movie. From the costumes to the iconic mustache, Malek does look a lot like the late singer. Twitter users were quick to point out the physical similarities between the actor and the musician in the trailer. And some fans also expressed their hope that the movie will deal with LGBTQ topics in its portrayal of Mercury's life.

And based on the lines he delivers in the trailer, Malek sounds a lot like him, too. The accent he uses as Mercury sounds different from the Mr. Robot star's regular one. And when Malek sings those first few notes in the trailer's opening, it's hard to know where Malek stops and Mercury begins.

The actor had help preparing to sing in the movie, too. In an interview with Stephen Colbert last May, Malek shared that he met Queen's living members while doing pre-recording for the movie. "It's been monumental meeting those guys," Malek told Colbert. He also shared that the recording was the first time the other band members heard him singing as Mercury, so he got to see their reactions in real time. Malek didn't share much about how they reacted, but it sounds like the band approved of his casting.

Bohemian Rhapsody has faced some controversy and trouble getting off the ground, though it looks like the movie's behind-the-scenes drama has since been worked out. In December, director Bryan Singer was fired from the movie, after reportedly exhibiting "erratic behavior," according to Deadline. Singer issued a statement saying he was dealing with "health matters concerning one of my parents" at the time, though the statement also acknowledged there were "creative differences" between him and Malek. Director Dexter Fletcher has since taken Singer's place at the movie's helm.

Even before the Singer controversy, though, there were some struggles getting the movie started. Sacha Baron Cohen was originally cast as Mercury, but he left the movie in 2013 due to apparent creative differences with the band's other members, according to Rolling Stone.

Since then, it sounds like Bohemian Rhapsody has gone in a different direction with Malek. And if the reaction to the trailer is any indication, fans are on board. While it's been a long time coming, it looks like it will have been worth the wait.