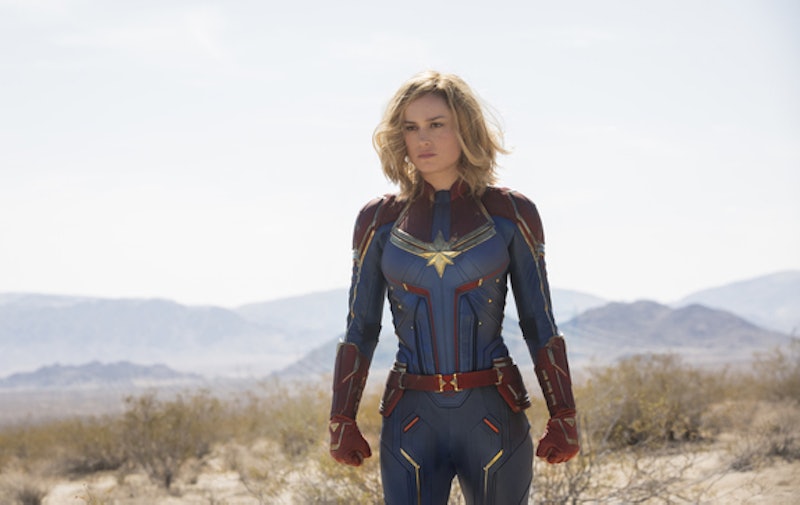 During the Feb. 3 Super Bowl, the new Captain Marvel Super Bowl trailer premiered, showing Brie Larson's hero reaching new heights. The trailer showed Carol Danvers, AKA Captain Marvel, debut her mantra: "Higher. Further. Faster." It has also certainly boosted excitement for the movie, which is due to be released in theaters on March 8.

The trailer started with a reference to the classic movie Top Gun. Danvers (played by Larson), an Air Force fighter pilot, is shown walking near an airplane hanger with colleague Maria Rambeau (played by Lashana Lynch). But unlike Top Gun, Danvers and her colleague don't have a need for speed. Maria asks, "Are you ready?" Danvers answers: "Higher, further, faster, baby."

The mantra is repeated throughout the trailer as Danvers is shown training, in her Air Force uniform, in combat, and in the air, of course. The trailer also gives fans glimpses of Mar-Vell (played by Jude Law) and Nick Fury (played by Samuel L. Jackson). At one point, Danvers in her Captain Marvel uniform launches herself into outer space, encompassing each word of her mantra. Or, as Captain Marvel tells an unknown person in the trailer, "Try to keep up."

After the trailer's premiere during the big game, Larson herself retweeted the Captain Marvel account's trailer tweet and added the comment, "Does this mean I can forever brag about *~*playing*~* in the Super Bowl?" I mean, technically, she did.

And fans were all about the trailer's new footage.

Fans on Twitter also definitely felt some female power vibes in the trailer.

Some Marvel fans were truly overwhelmed that both Captain Marvel and Avengers: Endgame trailers premiered during the big game.

It's been a weekend filled with sneak peeks at the movie. Just one day earlier on Feb. 2, Larson tweeted a Captain Marvel clip showing the titular hero being the kickass superhero she is. "I’ll just leave this here. #CaptainMarvel."

In a September 2018 interview, Brie Larson told Entertainment Weekly that playing Danvers, who is part-Kree and part-human, has the powers of a god, but she's also very human and vulnerable in the movie.

And Marvel fans will finally get to see Captain Marvel's adventure on the big screen in theaters on March 8. To quote Captain Marvel herself, "Try to keep up."