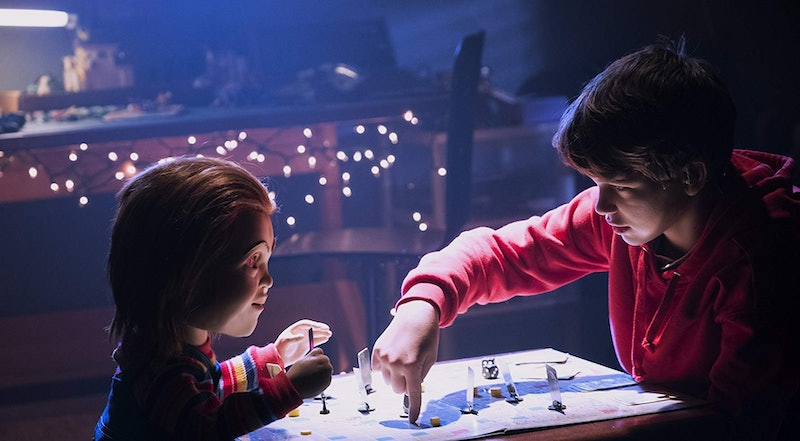 Chucky the doll made his onscreen debut in 1988, when the original Child's Play — written by Don Mancini, John Lafia, and Tom Holland (no relation to our current Peter Parker) and directed by Holland — premiered. And that creepy flick was just the beginning. Child's Play yielded six more feature-length films, including Child's Play 2 and 3, Bride of Chucky, Seed of Chucky, Curse of Chucky, and Cult of Chucky. Another Child's Play, premiering on June 21, brings the murderous doll into the 21st century in more ways the one. Reflecting the digital age we live in, Chucky is a more advanced, "smart" version of the character born over 30 years ago. And the new Child's Play is not a sequel to the previous set of Chucky movies, but a reboot. In fact, the existing franchise is still active. Per Deadline, a Chucky TV series is coming to Syfy.

The new film, meanwhile, is produced by It producers David Katzenberg and Seth Grahame-Smith, directed by Norwegian filmmaker Lars Klevberg, and written by Tyler Burton-Smith. The most basic premise of the film is similar to that of the original: Karen Barclay (Aubrey Plaza) gifts her son Andy (Gabriel Bateman) a toy doll (Mark Hamill) for his birthday, unaware of the sinister consequences this will unleash in their household and their town.

In the original Child's Play, Chucky is bloodthirsty because the soul of serial killer Charles Lee Ray (Brad Dourif) enters the doll via a problematically portrayed "voodoo" ritual, after he's morally wounded by Detective Mike Norris (Chris Sarandon). The new film, meanwhile, focuses on the frightening power of technology gone wrong. Instead of a toy company making the dolls, it's a tech company called Kaslan. The dolls are released as a part of the "Buddi" system that you can set up in your home, and is able to control basically everything in your life — from your television and surveillance to your thermostat and even your car. You can imagine what can go wrong there.

Because the character of Andy is younger in the original, he wasn't as active in trying to take down Chucky as the kid in this new movie is. He winds up getting sent to a psychiatric ward, as none of the adults around him believe him. Meanwhile, as shown in the trailer, this new Andy is able to enlist the help of his friends to hatch a plan to stop the doll's murder spree once and for all.

There's no need to watch all seven Chucky films from the original franchise before seeing this one, as there aren't really any connections aside from the same character names from the 1988 Child's Play. But if you want to compare notes and see how well this modern-day version stacks up against the original, then by all means go ahead and watch the first film, and maybe Child's Play 2 and 3 after as they still follow Andy and Chucky's rivalry well into Andy's entrance into military school. The four other films are not related to that human character, though it's still Charles Lee Ray's soul trapped in the doll.

Per Slash Film, Mancini isn't particularly thrilled that the franchise is being rebooted. On The Post Mortem Podcast, he said that he and producer David Kirschner were asked if they wanted to be credited as executive producers on the new movie, though they wouldn't be involved creatively. “We said no thank you, because we have our ongoing thriving business with Chucky. Obviously my feelings were hurt," he said. "And I did create the character and nurture the franchise for three f*cking decades … So when someone says, 'Oh yeah, we would love to have your name on the film…' it was hard not to feel like I was being patronized. They just wanted our approval. Which I strenuously denied them.”

So fans who want to stay loyal to the existing franchise may skip this version. But if you're eager for Chucky content, regardless of who's making it, it sounds as though there's plenty more to come.