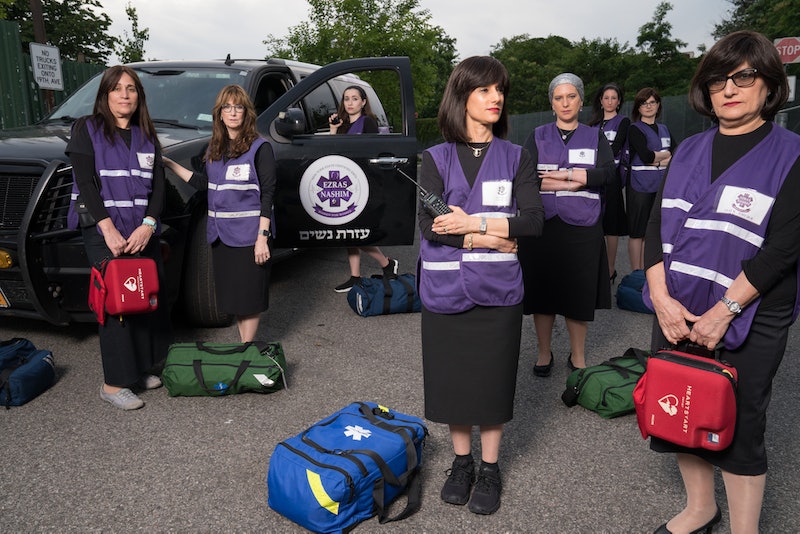 When you don't live within a sheltered religious community, it's hard to imagine that a simple decision like calling an ambulance when there's a medical emergency could be wrought with hesitation. But for Hasidic Jewish women in Borough Park, Brooklyn, calling an ambulance may mean the unwanted touch of men, your body parts exposed, or immodesty that leads to discomfort. As a result, many of them don't call at all, leading to potential tragedy — which is why a group of Orthodox women decided to start their own all-female ambulance corps, as shown in the new documentary 93 Queen.

Directed by Paula Eiselt, a member of the Orthodox Jewish community, the film (in theaters now) captures the women's journey to save lives. It focuses on Rachel "Ruchie" Freier, a practicing lawyer with six children. "Religious women are the busiest creatures," Freier says in the film, noting that it took her until the age of 40 to earn her law degree. In the Ultra-Orthodox neighborhood in which Freier lives, members of the community who need an ambulance are picked up by Hatzolah, a Jewish, all-male EMT corps. Hatzolah's refusal to accept female members into its ranks inspired the creation of Ezras Nashim, an all-female band of volunteer EMTs who cater to the needs of Orthodox women, especially in regards to childbirth.

Watching "Ruchie" and her team of women take initiative and defy the patriarchal rules of their community is inspiring. "The worst thing to tell me is I can't do something because I am a woman or because I am a religious woman," Freier says. "We can have babies every year but can't be an EMT?" One of the most moving scenes in the film shows Freier's teenage daughters and their friends discussing their futures around the dining room table as they stuff envelopes for Ezras Nashim. Not yet wearing the traditional wigs of their mothers and female elders, they speak of their dreams of going off to college or becoming doctors. Yet their hopes are still diluted by their own fears that, at the age of 22, they'll be considered too old to find a date.

Naturally, Ezras Nashim faces backlash from Hatzolah and many of the men within their traditional sect. "As a Hatzolah member... you are playing with fire," an anonymous internet troll writes in the comments of a news article detailing their cause. Prank callers tie up their phone lines, and their sole ambulance car gets mysteriously booted. But Freier and her team remain determined. They're told that they need to stop, "or else." "Or else what?" another woman asks. "I'll find out," Freier says.

But Freier isn't without her blunders. When Ezras Nashim begins to recruit for the various roles within the organization, Freier forbids unmarried women from taking jobs as EMTs. They can be dispatchers or serve in other ways, but single women out on the streets at night is taboo. This ruffles the feathers of other major players in Ezras Nashim, making for an interesting look at which women adhere to which expectations within their conservative movement.

There's also Freier's refusal to label herself. That she doesn't wince when a radio host asserts that, "One shouldn't think of her as feminist," is eyebrow-raising, as feminism is inherent in what Ezras Nashim is doing — regardless of the women's unwillingness to embrace the term.

Additionally, the documentary itself neglects to question the ingrained sexism that initiated the community's problem to begin with, nor does it address the ethical issues surrounding privatized ambulance services that only pick up certain members of a community. 93 Queen avoids challenging what some consider the misogynist tendencies of Ultra-Orthodox communities on the whole; rather than ask why women should feel ashamed of exposed legs or challenge the inferior status of women in Ultra-Orthodox Judaism, Esras Nashim, for all its good, still maintains the status quo that relegates women to one side of the room and men to the other within their community.

But: baby steps. As 93Queen shows, these women are still fighting against expectations that they should remain inside their homes raising children and cooking meals. And if, in the end, the result is the increased comfort of women in childbirth and other medical emergencies, it should only be applauded.