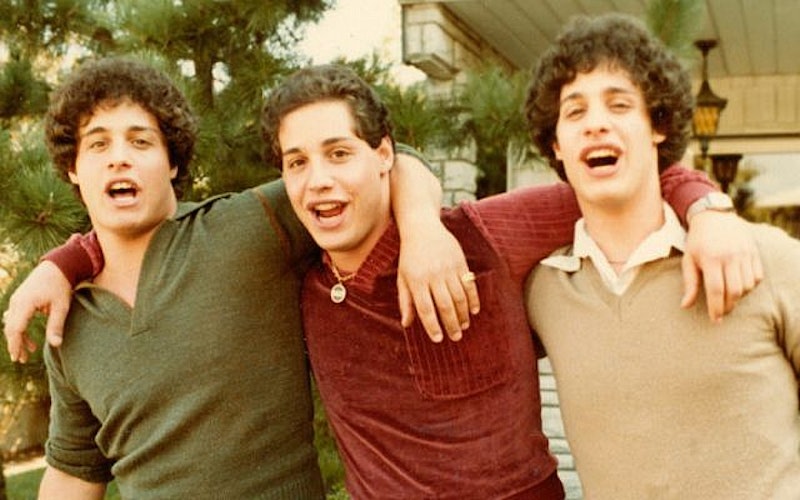 Spoilers ahead. Stories about twins who are separated at birth and then find each other later on are always fascinating. But the new documentary Three Identical Strangers is about triplets separated at birth, and it's got everyone talking. Tim Wardle’s movie, out now, features famed triplets Bobby Shafran, Eddy Galland, and David Kellman; their story was widely circulated during the ‘80s, even getting them a cameo in Desperately Seeking Susan alongside Madonna. But the new doc goes beyond the media’s interest in their story and their fame, delving into the dark side of the triplets' lives.

The film tells the wild, true story about how the siblings discovered they were part of an experiment by psychoanalyst Dr. Peter Neubauer of Manhattan’s Child Development Center that looked into how similar twins were despite growing up in separate households. According to the New York Post, their families weren’t told that the boys had siblings or about the nature of the study; instead, they were just told that they were part of a “routine childhood-development study.”

For the first 10 years of the triplets’ lives, researchers would visit their homes to conduct studies. Even though the visits eventually ceased, the researchers would still gather information about them for many years afterwards. Another detail about the experiment was that each triplet was placed in a different socio-economic household. Kellman was placed in a lower class family, Galland in a middle class one, and Shafran in an upper middle class one.

Newsday reported in 1997 that after discovering this, the triplets harbored anger at knowing they were separated from each other. “''How can you do this with little children? How can you do this to a little baby — innocent children being torn apart at birth?'', asked Shafran in the interview.

This is a sentiment that the two other triplets express throughout the doc, pointing out how painful it still is to know they were deprived from the opportunity to be a family from the start all in name of doing an experiment, without the researchers considering the emotional toll it had on the triplets. Refinery29 reports that Neubauer apparently never felt any remorse for his actions and the way the study affected his subjects, which are estimated to have been 13 children.

With the new doc is bringing attention to the unbelievable story, it’s also giving the triplets, at least, another opportunity to try to find closure in their harrowing experience. The Times of Israel reports that the remaining triplets (Eddy Galland died by suicide in 1995) are demanding compensation and an apology from the Jewish Board of Family and Children’s Services, now that the Louise Wise Agency through which the study was made possible is defunct. But in a statement given to The Washington Post, the Jewish Board of Family and Children’s Services declared they had nothing to do with the study, playing "no role in the separation of twins adopted through Louise Wise.”

It's taken a lot for the triplets to openly tell their painful story in detail. In an interview with Vulture, director Tim Wardle noted that although the study became public knowledge after the triplets’ story was widely reported, any previous attempts to make a documentary about it were halted. “There had been at least three attempts on major U.S. networks — two in the ’80s, one in the ’90s — and each time they got shut down. And no one could tell us why they got shut down. There’s a multiple Pulitzer-winning journalist who made a film for a major U.S. network in the mid-’90s, but it got pulled from on high. He never got an answer as to why,” said Wardle.

Even if the triplets won’t be able to get any compensation after years of dealing with the painful consequences of the study, now their detailed account of their story can finally be told to the world.