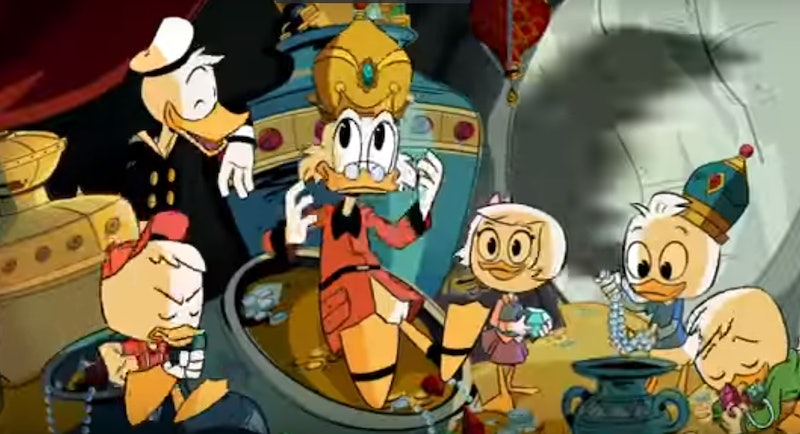 If you love your TV theme songs with a health dose of "woo-oohs," then prepare to feel as happy as a duck diving into gold. The new DuckTales opening credits sequence was unveiled on Wednesday, and the theme is full of those beloved "woo-oohs" you loved so much. In fact, it's pretty much a perfect update on the original DuckTales theme, which as far as I'm concerned, bodes extremely well for the reboot overall. I'm a grown woman currently getting very excited about this awesome cartoon, you guys. While the foundations of the song, such as the lyrics and the overall iconic melody, are still in tact, there are a couple differences between the new DuckTales theme and the original that are worth talking about. Essentially, they made it modern, but kept the classic charm.

The first, and perhaps most noticeable difference, is that it now features more of a feminine lead vocal, rather than a masculine one. The most important part of the new vocal, however, is simply that it sounds just as fun and energetic as the original. Seriously, I feel pumped listening to it.

Next up is the fact that the prominent, powerful bass line of the original is toned way down in this new version. Though it's kind of an iconic part of what makes the previous theme song so damn catchy, it was also very much of its time. Instead, the new theme dazzles on without that overpowering bass, like one of Scrooge McDuck's massive pools of gold coins.

Unless I've been watching the wrong credit sequence my whole life, it also seems like the theme ends on a far more bombastic note. It elevates, and becomes almost breathless in its wordy, energetic delivery until bam — the song's over, and you're totally stoked for the episode to start. It's everything I could have hoped for, people. *wipes single tear away from eye while humming the Ducktales theme*

The new theme song and credit sequence were released the same day as the announcement regarding the premiere date for DuckTales. According to Deadline, all the fun will begin with an hour-long movie debuting at midnight on Aug. 12 on Disney XD, which will be presented continually on the channel for 24 hours. The first two episodes of the series will then be made available on Sept. 23, which, as it turns out, is also the 30th anniversary of DuckTales.

Featuring an all-star cast including Danny Pudi, Ben Schwartz, and David Tennant, as well as recurring guest stars such as Lin-Manuel Miranda and Kimiko Glenn, the DuckTales reboot is looking like it could well become appointment viewing. And while we wait for the premiere to arrive, I think we should all enjoy some more healthy helpings of "woo-oohs," and listen to that new Ducktales theme song just a few more times. Sing it with me, Life is like a hurricane...