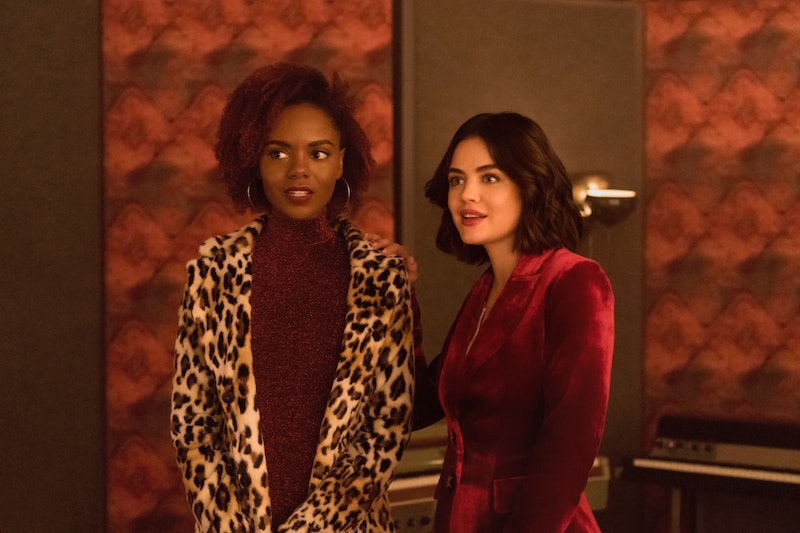 Josie leaves the dark and broody Riverdale behind for New York City in the first Katy Keene trailer. The CW released the trailer for the upcoming Riverdale spinoff on Sunday, Aug. 4, and its bright vision of New York City is a world away from the channel's hit teen drama. In this corner of the Archie comics-inspired universe, Lucy Hale's Katy Keene is a bubbly and ambitious fashion designer who lives with aspiring singer Josie (Ashleigh Murray), Broadway hopeful Jorge (Jonny Beauchamp), and socialite Pepper (Julia Chan). And, so far, there's not a single evil cult or nefarious gang in sight.

Instead, the trailer focuses on the sheer ambition driving the four creative characters at the story's center. Katy is fighting her way up the ladder to become a personal shopper at a store she and her mother have long admired, while Josie is fresh off the bus from Riverdale, and ready to pursue her music career. Then there's Jorge, who is facing discrimination for defying gender stereotypes in his pursuit of work on Broadway. "It doesn't matter what your day job is, this is where you need to be," Josie is heard saying in the trailer, and her words seem to echo the sentiments of all the characters as they work toward achieving their dreams.

The only real question mark is Pepper. She's always ready with advice for her friends it seems, but there's quite a bit of mystery still surrounding the fourth member of the show's main cast.

In addition to the trailer, the show's executive producer Michael Grassi teased what fans can expect from Katy Keene's first season at The CW's TCA panel on Sunday. One thing that's definitely on the table is a Riverdale crossover. "I think it's very likely that we will be seeing some familiar faces from Riverdale crossing over to our Katy Keene show and our New York world and we're excited about that," Grassi said, per Deadline. Could that mean a Josie and the Pussycats reunion is in the cards?

Only time will tell, but Josie's presence on the show ensures that music will be a big part of the story. In a recent interview with AOL, Hale explained, "There will be musical numbers, and it's a lot different than Riverdale, but still the same really strong, big characters, so I'm excited for everyone to see it."

Katy Keene is the second Riverdale spinoff — Netflix's Chilling Adventures of Sabrina is the first — but it's clear that the show is setting itself apart by being a distinctive coming of age drama. The characters are older, and their world doesn't seem to be full of danger at every turn. Katy, Josie, and their friends are far more concerned with their careers, friendships, and romances than with any huge, overarching mystery. And that's a refreshing change of pace for the Archieverse.

Riverdale fans will have to wait until midseason to see how Josie adjusts to her life in New York City, but until then they can rest assured that she seems more than ready to take the city by storm.