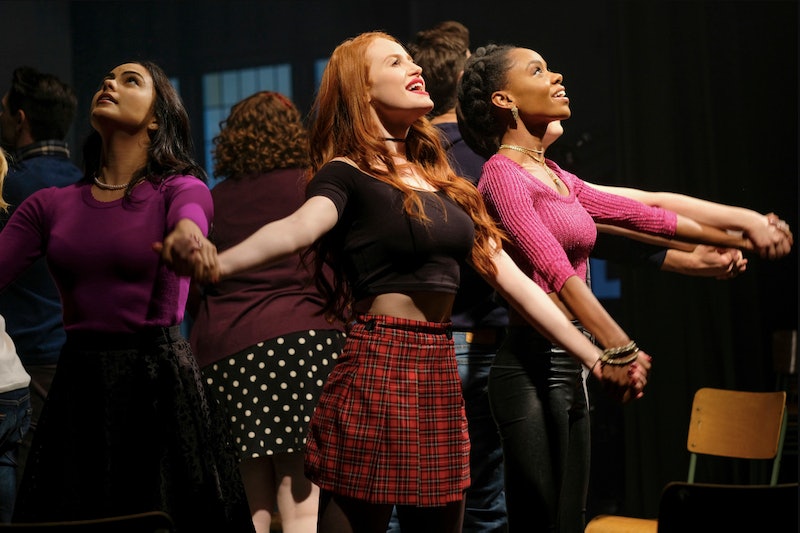 On Wednesday Jan. 23 it was announced that The CW is currently developing a Riverdale spinoff entitled Katy Keene and the details are sure to have Archie Comics fans on the edge of their seats. The forthcoming series, which will be written and executive produced by Riverdale helmer Robert Aguirre-Sacasa, is a musical drama that will, per Deadline, follow "the lives and loves of four iconic Archie Comics characters — including fashion legend-to-be Katy Keene — as they chase their twenty-something dreams in New York City."

Based on a character from the Archie Comics franchise, Comic Vine reported that Katy Keene has appeared in several series of the comic books since 1945 including Archie, Jughead, Betty and Veronica and Ginger — which seemingly leaves the door open for a possible crossover between Riverdale and Keene characters. Fans will, however, have to keep their fingers crossed until more details on the series become available as info on the show's premise still remains scarce. Comic Vine also noted that Keene's popularity grew after making appearances in some of Archie Comics' most iconic anthologies and she eventually landed her very own series in 1949 which ran for 12 years.

Given Riverdale's propensity towards musical performances, it sounds as if Katy Keene is going to fit quite well into the Archie Comics' teen drama universe at The CW. In addition to its musical backdrop, the new show should also prove to have some very notable fashion moments given Keene's notoriety as a fashion maven.

Keene's look is, in fact, so iconic that fans of the character, more recently, began pointing out similarities between Keene and singer Katy Perry, according to BuzzFeed. In addition to sharing the the same first name, the two also seem to have a complementary fashion sense. Perry later dispelled the notion telling Rolling Stone that neither her look nor her life was rooted in the character. However, she did acknowledge that there was a great deal of coincidence between the two.

Deadline additionally shared that the spin-off will chronicle "the origins and struggles of four aspiring artists trying to make it on Broadway, on the runway, and in the recording studio." While the identity of the other three characters in Keene's clique haven't yet been revealed, Teen Vogue theorized that grouping could include Katy's rival, Gloria Grandbilt, or her close pal, Lucki Lorelei. There's also the possibility that one of Katy's boyfriends, K.O. Kelly, could be part of the landscape, while Katy's sister, Sis (who also has gone by the names "Melissa" and "Mackenzie" in the comics) could also make a grand appearance.

Aguirre-Sacasa announced the Katy Keene news on Twitter, writing, "The #Riverdale universe expands! Thrilled to be bringing the adventures of Katy Keene and her New York pals to life! Extra-thrilled to be doing this with my pal Michael Grassi @thatthingofwhen!" In August, Aguirre-Sacasa revealed that the new offshoot will be “very different from Riverdale," according to Entertainment Tonight. Although no premiere date for the show has been announced, ET reporters that the showrunners were hoping to debut in the 2019-2020 television season.

Katy Keene is technically the second spinoff from the Riverdale series. It will follow in the footsteps of The Chilling Adventures of Sabrina, which initially started off at The CW before moving over to Netflix.

With the popularity of Riverdale and The Chilling Adventures of Sabrina, Archie Comics' Katy Keene is sure to quickly earn the hearts of teen drama fans everywhere.