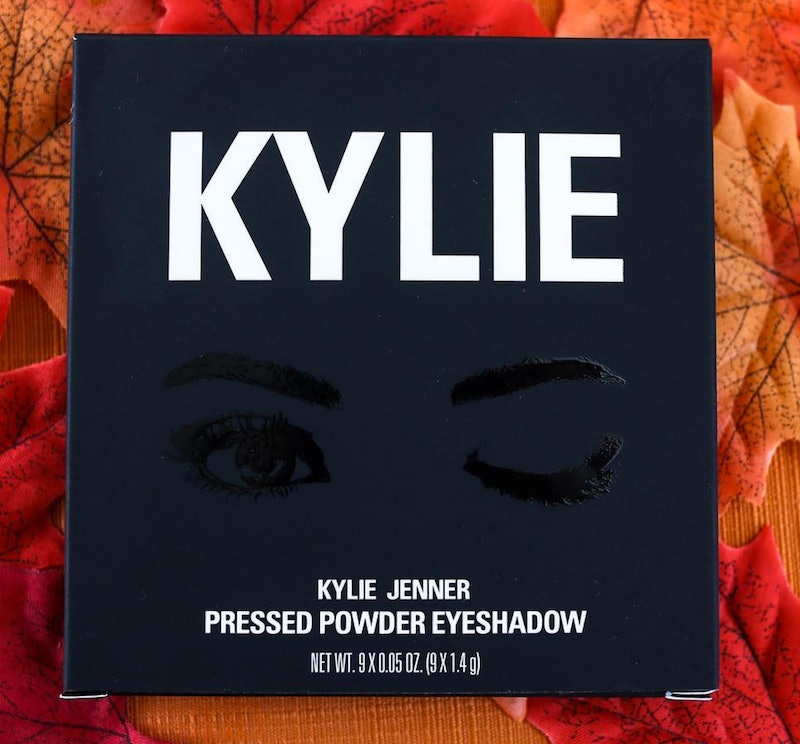 It's all about lips and lids with Kylie Cosmetics this fall, with new Fall Lip Kits and a fresh Kyshadow palette are on the way. Yesterday, Jenner and her BFF Jordyn Woods revealed the Fall 2017 Kylie Cosmetics Lip Kits, which are five warm and autumnal colors in the velvety, super pigmented matte formula that defines the brand's hero product. The "Fall Five" arrive on Oct. 6. But Kylie Cosmetics is also dropping a purple eyeshadow palette — and soon. That's all we know. The brand posted a tease on Instagram, confirming that the purple palette is coming soon, alongside a shot of the packaging. No swatches. No hints about the shades. No obscuring their true nature with a greyscale filter. No nothing!

But this tease certainly has me wondering if Kylie Cosmetics' Purple Palette may be something we have seen before.

Here's the deal: During the 2016 holiday season, Kylie Jenner created custom Kylie Cosmetics products for her nieces North and Penelope, the adorable and stylish daughters of her big sisters Kim and Kourtney, respectively. North's palette and products were purple, while Penelope's were pink. At the time, the palettes were touted as kustomized holiday gifts for the littlest ladies of the Kardashian family. It didn't appear that they would be going into production and we didn't hear much about them as the holiday season faded into the rearview.

However, the stash of pink and purple products aways felt like something Jenner could eventually pull the trigger on and add to her repertoire of commercial offerings — and perhaps she has. It would make sense for Jenner to make these palettes commercially available, especially since she put the time and effort into crafting the prototypes.

Sure, North and Penelope (and their mothers, really!) were able to enjoy the idea of products exclusively for and inspired by them. Yes, Jenner has the means to command her manufacturer to create test products at her leisure. But it's a year later and the shades exist — so why not take 'em off the shelf and use them?!

That feels like a totally viable theory regarding the Kylie Cosmetics Purple Palette. But it could also simply be the equivalent of makeup fan fiction. Bustle reached out to the brand to inquire about the status and details of the new eyeshadow set.

The multi-million dollar brand is clearly ramping up its fall product assortment now that the season has officially arrived. The Fall 2017 Lip Kits, for example, are a gorgeous mix of bold and neutral shades and align nicely with the entire lineup of mattes. While the tubes and the caps remain the same, the brand has swapped out its signature white boxes with the dripping lips logo for a black outer shell for both the new lippies and The Purple Palette. That's another ace change of pace for the constantly evolving and growing brand.

Here's an ICMYI moment. This screenshot from Jenner's Snapchat from the holiday season is of North's Purple Palette.

Perhaps this was Jenner's brilliant and I'm-An-Awesome-Aunt way to introduce or test-drive a new palette well in advance of its release? Something tells me nothing is left to chance or happy accidents when it comes to Jenner's vision for her products.

All this talk (and teasing) regarding The Purple Palette is eclipsing The Penelope Palette, which could eventually be repurposed as The Pink Palette. Never say never.

Regardless, King Kylie has her loyal legion of fans excited to see what's under the hood of The Purple Palette. Bring it!