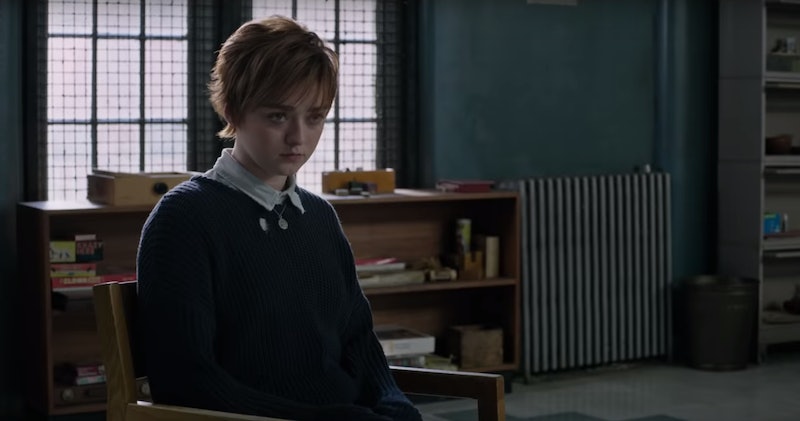 After years of speculation about whether it would ever get a widespread release, it looks like X-Men movie The New Mutants will hit theaters after all. As Variety explained, the first trailer for the Maisie Williams-starring movie came out in 2017, so it's pretty exciting that The New Mutants actually has a release date.

The movie will hit theaters on August 2, Disney revealed at CinemaCon this year, according to Variety. Before the announcement, rumors had swirled that the X-Men film would be headed to Hulu. But it looks like fans will be able to catch the movie on the big screen after all.

Before the announcement, Williams herself suggested that the movie wouldn't be headed for release anytime soon. In a Rolling Stone interview published last month, Williams said of The New Mutants, "Who knows when the f*ck that's gonna come out?" That's not a super optimistic viewpoint, but it makes sense, considering the fact that there are more than two years between the first trailer and the new release date.

"Hopefully this interview will make everyone hurry up a little bit," Williams told Rolling Stone at the time. It sounds like Disney was planning to reveal the new release date anyway, but it definitely didn't hurt to have the Game of Thrones actor remind fans that the movie was still on the way.

As for why the movie's been pushed back, one reason is apparently the fact that The New Mutants has called for a good number of reshoots. Williams told Rolling Stone that there'd been talk of redoing parts of the movie to "make it scarier," though not all of the reshoots had taken place at the time of her interview.

Even in the original trailer, though, there are plenty of notes of horror, with the blue tones and creepy music. And in a 2017 interview with IGN, director Josh Boone called The New Mutants a "a performance-driven horror film." And reshoots aside, it looks like fans are just happy they'll finally have a chance to see the movie.

"New Mutants has been on my most anticipated list two years in a row, so y'all need to quit playin' with me," one fan tweeted, showing just how long X-Men lovers have been waiting for the new movie.

Despite the new announcement, though, some fans are still skeptical about the release date.

Back in September, Taylor-Joy also talked about the movie's delayed release, and it sounds like the actor believes it will be worth the wait. "I don't find [the delay] frustrating because when the film comes out, we want it to be something that will make the fans truly happy," Taylor-Joy told Collider at the time. "Taking the time to do it, whilst people might find it a little bit frustrating to wait for it, when we deliver it, it's going to be fantastic. That's the most important thing."

Hopefully, fans will agree with the actor. For now, it's just exciting to see that The New Mutants really is moving forward, and that there are only a few months left until its release.