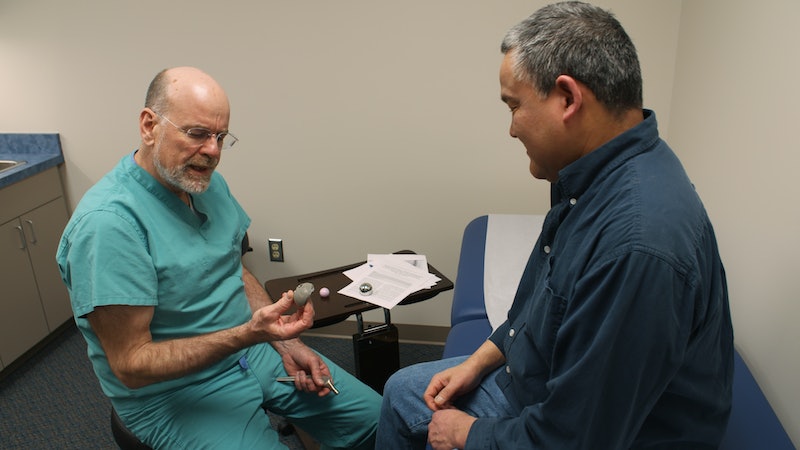 As patients, we go into a doctor's office expecting that they have the best intentions and that the medical industry is in the service of the people its designed to treat. And if we're having surgery, we expect that everything from the devices used to operate on us, to the companies inventing them, to the organizations regulating them, to the doctors using them are all in sync — that the chain of protection hasn't failed, and that everything being put into our bodies has been rigorously tested for safety. Unfortunately, as the new Netflix documentary The Bleeding Edge shows, that is not always the case, and we have to be our own best advocates when it comes to our health.

Directed by the Oscar-nominated filmmakers Kirby Dick and Amy Ziering (The Hunting Ground, The Invisible War), the doc, streaming on Netflix July 27, explores the multi-billion dollar medical device industry and the systems put in place to keep business running. We've all become aware that pharmaceutical companies can go to great lengths to get doctors to prescribe medications and that a massive drug lobby has helped lead to crises like the opioid epidemic; recent documentaries like Take Your Pills and Recovery Boys have explored those specific depths of drug abuse. But few people may realize that medical devices used during surgical procedures may fall through the same kinds of cracks – which is what The Bleeding Edge hopes to expose.

Due to the incredible growth of technology, the medical device industry has seen an intense increase in device invention over the past few decades. The Bleeding Edge dives into how the devices are regulated and tested, highlighting that many times, they're actually not tested at all. Through an FDA approval process called the 510K system, often times medical devices are simply piggybacked on the approvals of previous devices. This can happen over and over again, even to the point where the initial device may have been recalled. But the FDA isn't the only one to blame; a whole system of industry reps, inexperienced doctors, and an inefficient self-reporting system contribute myriad problems that add to the issue.

This is all disturbing, but one of the most outrageous aspects of The Bleeding Edge is how much medical device innovation and the failure of the system have affected women specifically. A good portion of the doc is devoted to a birth control device called Essure, which effectively causes sterilization by instigating the creation of scar tissue within the Fallopian tubes. The film features a number of women who have experienced a multitude of side effects leading to excessive bleeding, pain, and ultimately hysterectomies. ( In a 2014 statement in response to hundreds of women accusing Essure of causing serious problems, a company representative sad, "These stories, while compelling, are not representative of the hundreds of thousands of women who have relied on Essure since its FDA approval in 2002.")

One woman in the documentary, Angie Firmalino, started a number of Facebook groups and found thousands of other women who have been affected by the same device. As a result, she's made it her life's work to get Essure off the market and showcase how women's experiences are exacerbated by the blatant gaslighting that can accompany the medical device complaints. The Bleeding Edge shows that when one patient named Ana Fuentes reported her extremely painful symptoms to her doctor, she was simply told, "Most Latinas have menstrual problems." Fuentes' story is one of the more heartbreaking of the film, and details how a supposed simple procedure can negatively affect one's entire life.

As The Bleeding Edge shows, it's incredibly frustrating that the onus of preventing pregnancy falls solely on women, forcing women to make choices that they might not otherwise make and then find their complaints ignored when something goes wrong. But the failures of the medical device industry affect us all, as is shown in the documentary's depiction of an orthopedic surgeon whose own device caused a type of poisoning, leading to an extreme reaction and mental breakdown.

The Bleeding Edge emphasizes that it's more important now than ever to be our own best health advocates. With healthcare costs rising, the insurance industry refusing to cover certain procedures, no matter the cause, and the frightening fight for the right to healthcare in this country, we must take every offer of a cure, treatment, or solution with a healthy dose of skepticism. Ask what kind of trials your potential device went through; search social media for groups of people who have had both positive and negative outcomes; find out how many times your doctor has performed the surgery, and what kind of kickbacks might your doctor have gotten from the device's company. We may not all be experts, but we must be vigilant.